Volunteers give gift of furnace through Oil Heat Cares

by Alia Malik, Special to the Citizen’s News
Friday, September 13, 2013 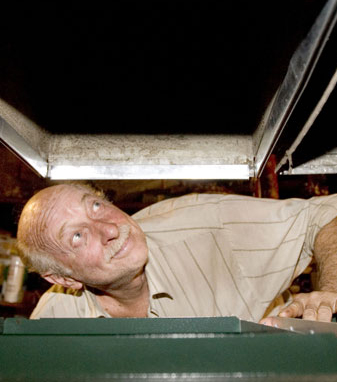 Pictured— Robert Juliano of Naugatuck takes a look at the ductwork for his new furnace at his home in Naugatuck Wednesday. –RA ARCHIVE

NAUGATUCK — Robert Juliano’s heart attack felt like the last straw.
Serious health problems forced his wife out of work in 1984, and she died six years ago. The couple had raised three children on the money Juliano made working in the shipping department at Pratt & Whitney in Cheshire.
Juliano, now 66, took a buyout two years ago when the Cheshire plant closed. He said he has enough to live on, but no savings. Then the furnace in his three-bedroom ranch house at 230 Conrad St. started blowing cold air.
He was lying on the couch one morning two years ago when searing pain ripped through his throat, jaw and the top of his head.
“I was thinking about this furnace, trying to catch up on bills and so on and so forth,” Juliano said. “I said if I die, I die. … This cross is getting too heavy for me to carry.”
Juliano survived the heart attack, and Wednesday he had another bit of luck when volunteers from the National Association of Oil and Energy Service Professionals showed up to install a new $4,500 furnace for free.
“I don’t want to go this year without a furnace,” Juliano said. “I appreciate the help.”
The money for the installation came from the national Oil Heat Cares fund, said Danny Gentile, president of the association’s New Haven County chapter. Juliano applied for the free furnace after reading a February article in the Republican-American about a similar installation in Middlebury. The group is planning another installation in Thomaston, outside of the area they typically serve, Gentile said.
The group usually installs at least three free oil furnaces yearly for area homeowners who have written letters explaining their need, Gentile said.
“We like taking care of people,” Gentile said. “It’s amazing what we got done for so many people over the years.” Organization members said Juliano’s installation was approved because of the struggles he had been through. His mother died when he was a child in Waterbury and his father died while he was in Texas serving in the U.S. Air Force during the Vietnam War. Over the years, he has also lost two brothers and a sister.

Raising a family on Juliano’s salary alone was not easy. He picked up extra work as a window washer and office cleaner. He would sometimes work 18-hour days just to pay the mortgage and utility bills.
His wife died and was resuscitated three times before she was finally taken off life support.
“It wasn’t easy for 25 years,” Juliano said. “I wouldn’t wish this on nobody.”
Technicians dismantled and removed Juliano’s furnace, which was more than 50 years old, Wednesday in 90-degree heat. Juliano lent a hand, lifting one side of the rusty apparatus so the other men could loosen screws.
Juliano’s new Williamson-Thermoflo furnace is more efficient and should reduce his heating bills by 30 percent, Gentile said.
Furnaces should be replaced about every 15 years, Gentile said.
“That’s like the heart of the house,” Gentile said. “It’s something in every house that they just don’t think about.”