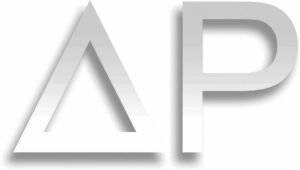 In a hot water heating system, to provide heat, we need to move or circulate heated water from the boiler out to the radiation. Years ago, before circulators, the pipefitters used gravity to distribute this heat out to the radiators. By using oversized pipes, which offered very little resistance, the buoyancy of hotter, lighter water and some fancy piping techniques, the old timers successfully circulated water around the heating system. Once circulators came on the scene, gravity installations were discontinued almost immediately.
Because the electric motor and impeller created the motive force to circulate the water, it wasn’t necessary to use the oversized pipes. You see, whether you are talking about an old gravity system or a modern hot water system, the ONLY way to get the heat out of the boiler and into the radiation is by circulation.
And what causes circulation? Years ago, they used the difference in the weight of hot versus cold water. Now this certainly doesn’t create a large motive force—hence the oversized pipes, which created very little resistance or pressure drop. Today, we use circulators to create this motive force.
But why does the water need help in moving at all? Why can’t it just flow out to the radiation?
FRICTION! As the water flows through the pipes and the radiation, it “rubs” along the interior surface of these items, and this “rubbing”action creates friction or resistance. So energy is “added” to the water each time it passes through the circulator’s volute.
A common term in the industry is “feet of head.” It is used to describe how many feet of head energy are added to the water by the circulator. The answer, of course, depends upon the specific flow requirements needed in that particular system and what the frictional resistance is at that flow rate.
Another interesting aspect that occurs is the fact that all of the head energy added to the water at the circulator is consumed by the system. This means there is no “leftover” head energy. The circulator will strive to move as much water (expressed as gallons per minute or GPM) as it can, limited only by the amount of head energy added to the water by the electric motor and impeller. And whatever that amount is, the frictional resistance offered by the system will consume all of it.
I received a phone call from a very frustrated contractor who had just installed new equipment in a boiler room upgrade. The upgrade included a new, high efficiency boiler, new indirect water heater and circulator and also a new system distribution circulator that provided heat for the entire building. His source of frustration was coming from the fact that the DHW circulator could not operate anytime the main system circulator was running. And the main system pump was designed to operate 24-7 once the outdoor temperature dropped below 65°F. He had the potential of having a building full of warm but smelly tenants…Not good! He was thinking the bigger main circulator was “too strong” for the smaller DHW circulator, which he thought kept that circuit’s check valve back seated because of the larger pressure differential developed by the main circulator.
I appreciated where he was coming from—high head circulator pumping right next to a smaller “headed” pump; but you have to remember that as the water flows throughout the system and is “rubbing” along the walls, the head energy is dissipating…so much so that by the time it has returned to the suction of the pump, all of the circulator’s pressure differential is gone. That is why you can have several different sized circulators sitting next to each other on a manifold and they can all co-exist without negatively impacting one another. Of course, the manifold needs to be properly sized or even better, oversized to allow this to occur.

There had to be something else going on in the job. We decided that he would revisit the job and check out the rest of the system as it left the mechanical room. He called back the next day and sure enough, he FOUND it! Just on the other side of the mechanical room, which was very small, he found an old three-way pressure differential valve that had failed in the by-pass position (See Figure1).
When he closed the butterfly valve on the by-pass line, the indirect water heater tank temperature immediately started to climb. In essence, he was right from the beginning; the high headed pump WAS affecting the smaller headed DHW pump. With the by-pass wide open, the main system circulator could direct a high percentage of its pressure differential right back into the main return line that was common to both circulators.

I was involved with another job where Delta P or pressure differential was creating the problem. In this case, the complaint was unwanted heat in a zone that was off—the thermostat was not calling and the respective zone valve was CLOSED! The job was piped like the drawing in Figure 2. As you can see, the system was zoned with zone valves on the supply header down in the boiler room and the system circulator that served all of the zone valves was on the return line, pumping back towards the boiler. The service technician who had called me tried to describe over the phone how it was piped and what was happening. A top floor unit was overheating so badly that the tenant had the thermostat turned down as low as it would go, had windows partially open and it was still 77-78°F in the unit. 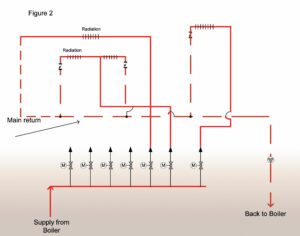 The boiler room piping was basically as drawn in Figure 2. Of course, when we first started, we did not know that the top floor zones were piped with one supply line and two separate returns connected to the main return line in a ceiling somewhere. All of the other units were piped as simple series loops. When we first began looking, the piping in the mechanical room looked like every other multi-zoned hydronic heating system that used zone valves. The circulator was setup to run on constant circulation. When the outdoor temperature dropped below a set temperature, the circulator would turn on. Each individual apartment had a thermostat wired down to its respective zone valve in the basement. Whenever the thermostat called for heat, the zone valve would open, allowing the hot water that was already circulating around the building into the zone of baseboard. So as we were checking out the boiler room piping, we kept asking ourselves how water could be circulating through a zone with its zone valve closed. The obvious answer is it can’t…but at the same time we had a unit upstairs that was severely overheating.
Fortunately, each zone valve had a service valve that would be used when it was necessary to fix or replace the zone valve. We decided to close that valve to see if the overheating stopped or continued. By closing this valve, we were taking the integrity of the zone valve right out of the equation. We waited a while and then checked the supply piping for the overheating zone and sure enough, the line was still cold (ambient temperature)! There was definitely no flow going past the zone valve and up into the apartment.
This made us think there had to be a “cross-connected” pipe somewhere that was feeding the other unit, or somehow, the thermostat wiring to its respective zone valve had to be crossed. This would allow one thermostat to call for heat and the wrong zone would open, allowing hot water to flow through the wrong apartment.
As we were discussing these various scenarios, I kept asking, “How long has this problem existed”?
“About three weeks,” came the answer from the property manager who was receiving the phone calls. And in that time frame, had ANY work been performed on the system? Thermostats replaced? Piping work? The answer was “no” to all the above. I said to the service technician, “Lets get upstairs to the overheating apartment—maybe we will see something there which isn’t visible from here.”
Once inside the apartment, we took the baseboard enclosure off. I wanted to be able to see all of the piping, including the supply and return lines. And once we did, two things “jumped” out at us. First, was there were three pipes coming into or leaving the apartment. Second, we noticed there were two check valves in the piping at either end of the apartment.
If you look at Figure 2 again, you can see that, in fact, there is one supply pipe that splits left and right, feeds both sides of the apartment and they then return individually into the main return line. And that explains why they had installed check valves. To prevent the water that was flowing along the return main from any of the other zones from moving backwards up one of the “off” return lines, through the baseboard and back down the other return line.
What we speculated to be happening was somehow, the integrity of one or more check valves was compromised. Either something became lodged onto the seat or the flapper was deteriorating or somehow leaking by. Regardless of the cause, we suggested that the both check valves in the overheating apartment be replaced with new ones. And once they were, the overheating complaints stopped!
If you have any questions or comments, e-mail me at [email protected] or call me at FIA. 1-800-423-7187