The Shot Heard Round the World of Oilheat

This time, the start of October and the oilheat season brings a landmark change. In New York City, the biggest city in the nation, a new Bioheat® fuel requirement takes root. For oilheat dealers, this presents a major opportunity for building long-term customer satisfaction—and retention. This is clearly an evolution much needed.
The people who work and live in New York City can now take comfort in knowing the oilheat that heats their businesses and homes is the cleanest in the nation, and quite possibly the world. Starting October 1, every gallon of oilheat in the city must contain at least two percent biodiesel. The blend is known as Bioheat® fuel.
The law comes as the result of 2010 legislation, when Mayor Michael Bloomberg signed an air quality bill that included the Bioheat provision for heating homes and buildings. A recently enacted New York State bill also required a switch to Ultra Low Sulfur Heating Oil, which took place in July. City Councilman James F. Gennaro sponsored the Bioheat legislation, with the effort supported by John Maniscalco, CEO of the New York Oil Heating Association, as well as the National Biodiesel Board.
Biodiesel is a renewable fuel made from agricultural byproducts and co-products such as soybean oil, and other fats and oils, including at least one abundant resource in New York City: recycled restaurant grease. It is the only domestically produced, commercially available advanced biofuel in the U.S., and supports 39,000 American jobs.
The mandate will replace 20 million gallons of petroleum annually with renewable, sustainable, domestically produced biodiesel. Not only does that replace foreign oil, it supports green collar jobs and green economic growth in the New York City area as a result. Those benefits are real and tangible, and are something oilheat dealers and customers alike can feel good about.
The City Council passed the bill unanimously—a vote of 45-0. That kind of universal support is rare, and underscores that the city is moving in the right direction, according to NYOHA’s Maniscalco. A long-time Bioheat fuel visionary himself, he championed the unprecedented municipal legislation, recognizing the powerful opportunity that Bioheat has in keeping the oilheat industry viable.

“Metro is proud to have been a part of a local biodiesel movement whose aim is to create a cleaner, more renewable and more energy independent future right here in New York City. We don’t plan to stop at a B2 mandate and call it a day. We are excited about getting more and more customers on B5, B10 and B20 where the benefits become even greater for us and future generations.” —Gene Pullo, President of Metro Terminals, the Brooklyn-based energy company that is in the finals stages of building the largest biodiesel processing facility in the United States.

“The city has embraced this progressive change, and we’ve encountered minimal resistance to Bioheat from dealers, legislators and consumers alike,” Maniscalco said. “Unlike sulfur reduction, where there was a failed attempt at a hostile amendment to keep the sulfur in the oil at its then-present high concentrations, there has been no resistance at the city level. We’ve been communicating the positive attributes of Bioheat for several years, and there’s been a constant buzz about it. It’s a proven positive change for governments, oil dealers, and oilheat consumers alike.”
A great deal of effort has been expended to create the Bioheat consumer message, which you have seen on buses, trains and truck wraps. Plans are currently underway by the National Biodiesel Board to make one final push to help raise consumer awareness about Bioheat through a similar radio and outdoor media program for 2012-2013, before turning the campaign back to oilheat, or rather, Bioheat, leaders.
Without fuel dealer participation, the best laid plans to convey the Bioheat message will be lost unless there is someone by the phone to respond to those consumers anxious to ask questions about their new heating oil. To date, fuel dealers have been cautious about demonstrating their support for this new fuel, but with the mandate now fully implemented, it’s time for them to step up, learn and discuss the changes with their customers. 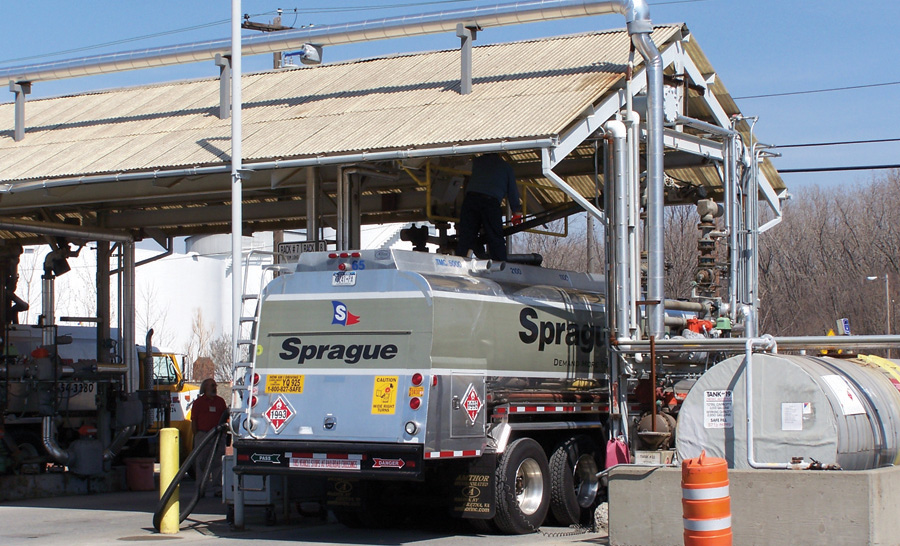 “Sprague has been supplying biodiesel and Bioheat fuel to our wholesalers for years, as we long ago recognized the superior operability benefits of biodiesel within heating systems. Customers appreciate the reduced maintenance and extended equipment life resulting from the cleaner burning fuel. We hope New York City’s efforts will encourage other cities and municipalities to consider the benefits of Bioheat for the environment as well as for its enhanced performance.” —Steven J. Levy, Managing Director of Sprague Operating Resources LLC and National Biodiesel Board (NBB) Governing Board Member

On the terminal side, a great deal of activity continues to unfold because of the demands associated with the Renewable Fuel Standard. Terminals I’ve spoken with were already up and running last summer. Some arranged to take delivery of B100 and blend it with conventional heating oil, with others bringing it in pre-blended. Ultra Green Energy Services formally opened its biodiesel rail transload facility at the Brookhaven Rail Terminal in Yaphank, NY in July. The rail transload facility will supply biodiesel for Long Island, while backing up the New Hyde Park terminal. This grand opening was an exciting sign of growth in biodiesel infrastructure. In the past, one of the deterrents to biodiesel’s growth was its limited accessibility. But now, biodiesel is becoming fully integrated into our fuel supply—and it is legislation like the New York City mandate, and the federal Renewable Fuels standard, driving that integration.
New York City consumes one billion gallons of varying grades of heating oil annually, more than any other city in the United States. Bioheat’s benefits are likely to make oilheat consumers breathe and feel better about the product they use to heat their homes. They are playing an active role in supporting renewable energy, cleaner fuels and green jobs. Ultimately, that means they are less likely to convert to an alternate heating source. That’s something every Bioheat dealer can benefit from—not just those servicing New York City.
The momentum emanating from New York needs to cross over the borders to jump start the evolution, which like the battle at Lexington and Concord, inspired many patriots to take up arms against Britain on April 19, 1775. The Bioheat outreach team has, with the help of many oilheat insiders, worked exhaustively over the past decade to deliver a product into the hands of fuel dealers that they could take and use to reengineer their offering to the oilheat customer. Having been part of that development process makes it convenient for me to observe and comment on the current state of Bioheat’s commercialization.
From my perspective, I would suggest dealers need to have their own Boston Tea Party and begin to take action. For months, I have suggested that simply waiting for nature to take its course so you can drive a delivery truck under the rack to load Bioheat is no longer an option. I still have to pinch myself when I see dealers sitting idle waiting for an industry red light to turn green before they begin their independent transition to Bioheat.
I pinch even harder when I hear people talk negatively about Bioheat; both the product and marketing story could be the catalyst that returns this industry to prominence. Some believe Ultra Low Sulfur Heating Oil is the answer, and even though it’s still good ol’ carbon, some race to embrace selling natural gas, electricity and propane so as to take the pain and suffering away from selling plain ol’ vanilla oilheat.
Then there are the industry leaders—those that come in a variety of sizes, fuel dealers from 700 thousand gallons to ten million gallons a year—all beginning to stage their own war on market contraction and to begin the battle to protect and grow their market share. They come to conferences, they participate in webinars, they take advantage of free marketing literature and they talk through their concerns publicly so as to arrest any fears that Bioheat might, in fact, not be the bright spot which it is being touted as being.
The entire petroleum supply chain deserves credit for making the changes needed to embrace blending biodiesel with heating oil to deliver Bioheat. Now that the fuel is terminal-ready, so much more is to be done to make the Bioheat movement “for real.”  I guess the choices are:  Treat Bioheat fuel as an arbitrage tool and tell no one about it, only to watch market share continue to erode, or strip the term oilheat off our stationary, websites, truck and uniforms and start an evolution like no other. Congratulations to those that fought to make the progress in New York City a reality. Consider yourself a true patriot.