Over this past winter, I was called on to  look at a one-pipe steam system. The homeowner was complaining that his steam system was operating inconsistently since the new boiler was installed. The primary complaint was that certain radiators just wouldn’t heat while others were heating fine. The only way he could get the “cold” radiators hot was to turn the thermostat way up. Naturally, the rooms with the “good” radiators became hotter than a steam room. As we walked through the house, we checked out all the radiators and their vents and then into the basement to find the main vents. As I was doing this, I couldn’t help but remember the name of a book, Audels Oil Burner Guide, which was published in 1946. In the book, there was a chapter dedicated to the subject of converting a coal-fired, one-pipe steam system over to oil. The chapter stressed how much more important it was to vent the air from the system when it was converted to oil than when it was coal fired. 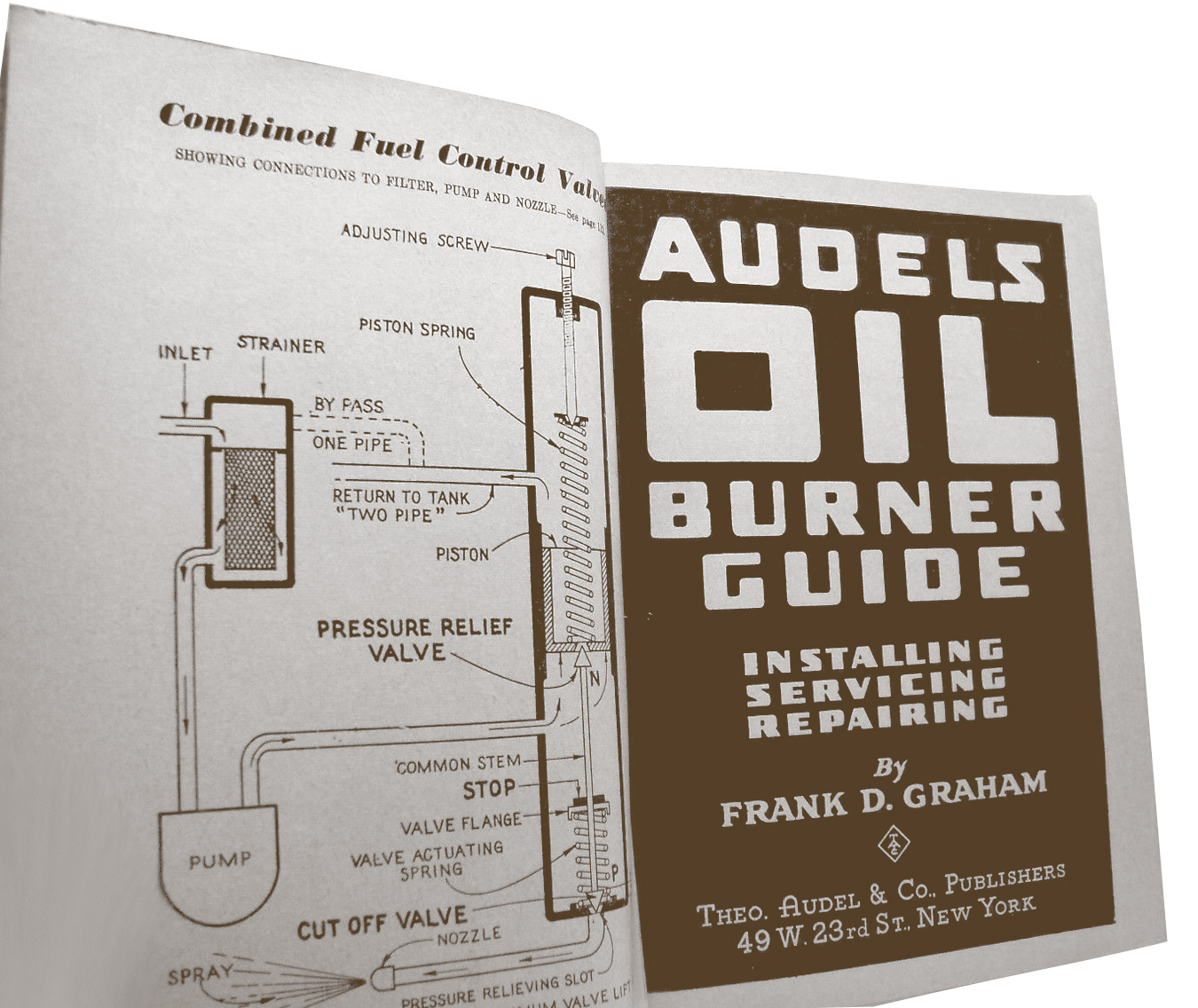 The book reasoned that once a steam boiler was fired with coal, the source of steam was constant. There was a consistent “push” of steam slowly nudging all the air out of the system through whatever venting was available. Once converted to oil, however, the source of steam was controlled by a thermostat turning the burner on and off. There was no longer this constant source of pressure in the system pushing the air out through the vents. Instead, the pressure was intermittent. As long as the thermostat was calling for heat, the burner would produce steam and air was vented from the system. Once it was satisfied, the burner was shut off. This left portions of the house cold because all the air hadn’t been vented from either the system main and/or the individual radiators before the thermostat was satisfied.
Audels explained that, because the vents used were non-adjustable, the radiators close to boiler would heat quicker than the ones further away. That is because the steam had to remove the air from the piping before it reached the furthest radiators.
Adjustable vents
The way to prevent this from happening, the book said, was to install adjustable vents on all the radiators. By adjusting the radiators close to the boiler to a slower venting rate and increasing the venting rate of the further radiators, you could synchronize the heating of all the radiators. You could balance the system by having the steam enter all the radiators at the same time.
The book cautioned against taking this adjustable venting to an extreme. In systems where all the radiators are the same size, and you have to adjust the venting rates solely because of the radiators’ location, the amount of throttling isn’t excessive and won’t hold back the heat.
On jobs where smaller radiators are mixed with considerably larger, slow-to-heat radiators, the application of adjustable vents is different. When the same size air vents are installed on radiators varying in size, it will obviously take longer for the larger radiators to remove the air than the smaller radiators. This means you have to throttle back considerably on the smaller radiators while the air is venting from the larger, slow-to-heat radiators.
Guess what you are throttling back? The heat. This is what the book meant by misapplying the principle of adjustable venting. Instead of cranking down the venting rate of the smaller radiators, why not increase the venting rate of the hard-to-heat radiators? The book recommended drilling and tapping a second 1/8-inch hole in the radiator and installing a second vent. That way, instead of having to throttle back excessively on the smaller radiators, you have provided a second hole to remove the air quickly in the oversized radiators. By opening the venting rate of the smaller radiators, you have provided two benefits:

Venting the mains
The venting of a steam main became more important when the boiler was converted from coal to oil. The book advised that you install at least one ¾-inch main vent at the end of every main. There is a huge amount of air in these pipes. If you rely on the radiator vents to remove this air, you will definitely experience unbalanced heating.
Think about it for a minute. Radiator vents, as the name implies, are designed to vent air from radiators. Not from 2″, 3″ or 4″ steam mains. Main vents are much bigger with greater venting rates than radiator vents. The book explained that by installing main vents at the end of each main, steam would be distributed throughout the house quickly. That is exactly what is needed. Faster distribution makes sure the steam reaches all the radiators before the thermostat shuts off the boiler. If the system had more than one main and the mains were not the same length, the book suggested that two or more ¾” vents are installed on the longer main and one vent on the shorter main. This would create a balance of steam traveling through the whole system at about the same time.
Lessons from the past
This information must have been valuable for the servicemen working on steam systems in the days when coal systems were being converted to oil. It occurs to me, however, that a high percentage of the steam heating systems we work on today started out as coal-fired boilers. And what is the biggest complaint from homeowners who live with one-pipe steam systems? Maybe if we applied some of the tips from Audels Oil Burner Guide and vented the system as described, those complaints would disappear.
I think a replacement boiler installed today is essentially a conversion job. The new boiler is very different from the old boiler. It makes steam much faster because it doesn’t hold nearly as much water as the old boiler. Consequently, it will build pressure faster if the air in the system isn’t vented fast enough. Before you know it, the new boiler is cycling on and off the pressuretrol and the customer is complaining that his old boiler never did that!
Don’t turn the pressuretrol up figuring that will stop the short cycling. The higher pressure only burns more fuel, keeps all the radiator vents closed because the higher pressure exceeds the drop-away ratings of the vents and creates system imbalances. Instead, the answer to this common problem is to vent the mains aggressively and use some tricks from the old-timers who wrestled with these systems years ago.
If you have any questions or comments, e-mail me at [email protected]; Tel: 800-423-7187 or follow me on Twitter at @Ask_Gcarey.  ICM