Editor’s Introduction
Timmie McElwain has been working in the gas industry for over half a century and has been training service technicians in the service of gas heating appliances nationwide. In 1994, he founded Gas Appliance Service Training and Consulting and says he has trained well over 40,000 technicians in his years as a trainer. With the undisputed influx of LP gas as a second liquid fuel product for more than half the fueloil marketers who read ICM, we are expanding our editorial coverage in this area. Many oilheat technicians are cross-trained to service oil and LP gas, but although they are both delivered to the customer’s home and stored on site, they are vastly different fuels, with vastly different properties.
In this first article, we wanted to get down to basics, as a firm foundation for future articles dealing with this more volatile product, so we asked Tim to start…well, at the beginning.
And before you ask, yes, he will also discuss natural gas on occasion, for the truly diversified home energy company today is expected to service home heating equipment, whatever the fuel.

This is my first article for Indoor Comfort Marketing; I am looking forward to perhaps doing many more.
I am going to address the fundamentals of some of the different fuel gases and also a little bit of the history of the gas industry which, as you know, is very closely tied to the oil industry.
I have been involved in the gas industry from 1966 up to the present. I have seen many changes take place over the years. The fuel industry today is in a time of transition as the emphasis becomes energy and not just a particular fuel. This means that many who are fuel providers are diversifying their product offering.
I am going to work toward educating the readers on “The Gas Side” if I might call it that. What will be addressed are the advantages, safety requirements, applications, characteristics, combustion, codes and standards. I will, in addition to those items, also be addressing practices and procedures for the gas industry.
Fuel Gases
It is important to understand something about the particular fuel gases that are used for heating, cooking, drying clothes and other uses. Each gas has different characteristics and behavior that directly affect the operation of equipment. In some cases it is necessary to convert equipment from one gas to another.I am often asked questions about origins and characteristics of different fuel gases. We will address this subject and make some comparisons of the different fuels.
The characteristics of the different gases, along with specific values for each gas, are important and necessary for calculating such things as pipe sizing, determining inputs to equipment and heat loss calculations.
It may be enlightening to some to know that all of these different fuel gases are used in various locations here in the New England area and most likely in other areas.
There is one gas utility here in New England that uses butane in their system. It is of interest because that means they have to convert each piece of equipment that comes on their lines.
In years past, to compensate for what the gas industry calls their “peak shaving period,” the utilities in many areas mixed the gases—natural and propane in particular. This was due to high demand in extreme periods of cold weather for natural gas and the utilities had not contracted for pipeline gas to cover those high demand periods. The mixing of propane in many instances caused some burner problems and service difficulty in adjusting burners.
Today, most utilities use Liquefied Natural Gas, commonly called LNG. The high demand periods are now adequately met by mixing LNG into the lines with existing supplies of Natural Gas with out any drastic change in characteristics. This in turn helps to eliminate problems encountered in the past with mixing propane into the stream.
Principals of Gas Heating
Gas is a clean-burning, easily transported fuel. As such, the gas industry and gas appliance industry have grown together to become one of the major sectors of our nation’s economy. Gas is used in millions of homes for heating, cooking, clothes drying, water heating, incineration or cooling.
Using the heat
With the exception of gas fuel cells, all gas appliances are designed on the basis of using the heat generated by combustion to perform some task. Most appliances are made for heating air or water directly for space heating or water heating. Others are for heating and cooking food.
Some, such as gas refrigerators and air conditioners, utilize the heat produced in an indirect fashion. Even with these appliances, the energy to do work comes from the heat produced by combustion of the gas. Any consideration of the control and functioning of any appliance must be based on the utilization of this heat.
Use of gas
In addition to the over 40 million domestic customers mentioned earlier, about four million commercial establishments use gas. These include bakeries, restaurants, hospitals, schools, auto washes, laundries, and public swimming pools. These gas users employ gas appliances which are, in many cases, similar to domestic ones except they are larger and sometimes have more complex controls; for example, baking ovens and water heaters.
About one half of the gas produced in the United States is used in industry. Large quantities of gas are used in making steel, glass, chemicals, paper and in food processing. The gas combustion equipment used in these industrial processes differs substantially from that used in domestic applications, but the idea is the same— utilization of the heat energy produced. 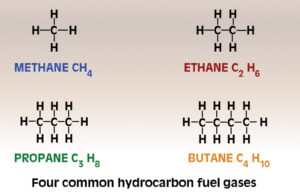 Gas Properties
Manufactured Gas
Long ago in Europe, fuel gas was manufactured to be used for lighting. In the United States, manufactured gas was also produced and widely distributed, especially in the Northeastern states. This manufactured gas is most often produced by passing steam over heated coal. It contains hydrogen and carbon monoxide as the heat-producing combustible gases.
Manufactured gas burns with very different characteristics than natural gas which is mostly methane. Today, very little manufactured gas is now used, having been replaced by natural gas supplies. It has been proposed that synthetic natural gas (SNG) be made from coal or petroleum naphtha to augment the current natural gas supply. Although this gas is “manufactured,” it differs from the earlier form of manufactured gas in that it will be mostly methane and be nearly identical to natural gas in composition and burning characteristics. There are other manufactured fuel gases such as coke oven gas and blast furnace gas, but these are not distributed to domestic customers except rarely as small additions to natural gas supplies.
Natural gas
Natural gas is used as the main fuel gas today. It is called natural gas because the gas is found in the earth. It occurs as a mixture of hydrocarbon and non-hydrocarbon gases, often in association with petroleum. The natural gas of commerce, supplied to fuel gas markets, is usually 80 to 90 percent methane, the principal constituent of all natural gases. Most of the remainder is nitrogen with some natural gases containing heavier hydrocarbons or carbon dioxide. Heating values of natural gases range from about 900 to 1200 Btus per cubic foot.
LP-Gas
Liquefied Petroleum (LP) gas is a petroleum product obtained from both gas and oil wells. The “wet” gas from these wells is a mixture of methane, ethane, propane, butane and heavier hydrocarbons. This gas is refined in a natural gasoline plant where the various components are separated. The methane and ethane extracted by this process are distributed as natural gas; the propane and butane are used as liquefied fuel gases; the heavier hydrocarbons are used in the production of gasoline.
Additional propane and butane are obtained as by-products of refinery operations. Commercially-distributed LP gases may be considered mixtures of propane and butane. LP gas mixtures can easily be liquefied and thereby reduced in volume by moderate pressure, so they are shipped and stored as liquids until used. LP gas heating values range from about 2500 Btu per cubic foot of gas to somewhat over 3000 Btu per cubic foot of gas depending on the relative amounts of propane and butane.