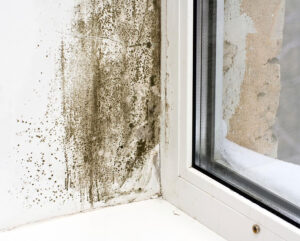 Beaches, palm trees and sunshine, things synonymous when one thinks of Florida. Sweaters, wool hats and snow, not so much, but they do exist there. An average temperature of 75°F is what South Floridians experience during the winter months1, while our friends to the north are typically experiencing gray skies, artic blasts and showers of rock salt. However, in 2010, the subtropical continental United States, or South Florida as it is commonly known, experienced an uncommonly extended cold snap over an approximate three-month period between January and March1. The monthly minimum temperatures of 51°F – 55°F were an average 7°F below the typical minimum temperatures from prior years (58°F – 62°F), with exterior relative humidity measurements ranging from 65 percent to 80 percent1. After the cold snap, homeowners and building owners complained of a patina of fungal growth on exterior walls and on various contents within the structures. The moisture source was unknown and no apparent water leaks were identified; however, in many cases the causes were misdiagnosed.
A patina of fungal growth on various surfaces can be characteristic of existing, previous high-humidity conditions; whether it be a hot and humid environment in the south or a cool and clammy environment in the north. Why the high-humidity conditions and fungal growth during this period of uncharacteristically cool weather? In most cases, dampness and moisture necessary to support fungal growth are the result of multiple factors, not just one, increasing the complexity of determining the source. A good understanding of building science went a long way in determining and supporting the cause and origin of the abnormal fungal growth.

Psychrometry is a good place to start. Fundamentally speaking, it is the study of moist air. For the purposes of this glimpse into the world of pyschrometrics, we need to understand three measurements: dry bulb temperature (actual temperature of the air), the wet bulb temperature (amount of water vapor in the air) and the relative humidity (amount of water vapor in the air compared to the total that could be held at a given temperature). With these three measurements we can use a psychometric chart to determine the dew-point temperature. Alternately, we can use our digital psychrometers, which give real time measurements including the dew point.
What is dew point? It’s the temperature at which moisture will begin to condense out of the air onto a surface. Why is that important? Because the fungal growth in question was a patina on the surface of materials where a water release was not known or proven to have occurred. The moisture had to come from somewhere and it was attributed to a phenomenon known as condensation.

Condensation is the physical change of a gas to liquid, in this case water vapor to water droplets. As water vapor cools, the molecules slow down and begin to join together, forming droplets of liquid. Think about a cold beverage pulled out the refrigerator and the moisture that appears on the surface. The cooled can is cooling the surrounding air below its dew point, encouraging moisture to form as a film on the surface of the can. A similar condition occurred on the inside surfaces of these residences.
The ability for moisture to condense within the built environment depends a lot on the relative humidity (i.e. water vapor) maintained within the space. Water vapor normally originates from the exterior, and it will migrate into the building until equilibrium is reached between both spaces. Additionally, latent moisture is a common source which is created within the space by the occupants. Examples of this include cooking, breathing and bathing. Even if the relative humidity is low outside, occupant activities within the residence can play an important part. In South Florida, it is common for multi- generational families to inhabit the same home, in many cases a small home with one or two bathrooms and a small kitchen. When latent moisture increases within the residence and is not properly evacuated, surface fungal growth problems often arise.
This can be further complicated by the absence of, or improperly operating, exhaust fans and dryer ducts.
How is this moisture controlled? Primarily via operation of the heating, ventilation and air conditioning (HVAC) system, specifically the air handler unit (AHU), which removes moisture out of the air as it passes over the evaporator coils. AHU operation is based on the thermostat set-point temperatures that will call for cooling when the interior temperature rises above the set point. From my experience, thermostat set-point temperatures typically vary from 75°F to 78°F; therefore, during this period of colder outdoor weather, dehumidification was relatively absent as the ambient air temperatures were below the thermostat set point. The absence of dehumidification allowed water vapor to increase within the residences, both from exterior and occupant use. The elevated water vapor inside the home increased the likelihood of moisture condensing on the interior side of exterior walls of the building as the dew point temperature of the interior air increased. The colder outside temperatures allowed the exterior walls to maintain cooler temperatures on the interior surfaces of the exterior walls, creating conditions for fungal growth to proliferate. The increased water vapor also encouraged fungal growth on the surfaces of various contents within the home.

In South Florida, homes are likely to be constructed with concrete block with insulation (when used) on the interior sides of the exterior walls. There is little need for heating, just keep the cool, conditioned air inside the residence. One of concrete’s many unique properties is its thermal mass. Thermal mass is the ability of a material to absorb and store heat energy. The denser a material is, the higher the thermal mass. Concrete is dense, therefore it takes a lot of energy to change the temperature. The uncharacteristically cooler exterior temperatures that occurred over the three-month period allowed the concrete walls to remain cool for longer periods of time, which transferred to the interior surfaces; promoting condensation on these surfaces. Think of the interior surfaces of a building’s exterior wall as the outside surface of a beverage removed from the cooler.

Thermal bridging is another phenomenon that can play a big role in determining why condensation and fungal growth occur on and near exterior walls. As a bridge allows us to cross a body of water or large void in the earth, poorly insulating building materials—including wood, metal, and concrete—provide a pathway for heat energy to travel from the outside of the building to the inside. Wall studs, whether metal or wood, concrete walls, and concrete porches/patios in buildings are prime examples of thermal bridges.
Take, for instance, a framed wall assembly: Insulation is typically located between the studs, leaving the studs in direct contact with the interior and exterior surfaces. This provides a pathway for energy to transfer from the outside to the inside. We saw deposition on the interior surfaces of exterior walls (both debris and fungal growth) that coincided with the location of the wall framing, a condition known as ghosting. The cooled surface encouraged condensation and also attracted debris out of the air. This was a strong indicator that thermal bridging had occurred, which supported our conclusion the fungal growth was the result of condensation, and the uncharacteristically cooler temperatures.

We have discussed why the moisture was occurring during this period, now let’s focus on the fungal growth. Simply put, moisture is the limiting factor for fungal growth to occur2. No moisture, no mold. Most fungi have varying moisture requirements known as water activity. Using these requirements, fungi have been classified as primary, secondary and tertiary colonizers3. Primary colonizers have the lowest moisture requirements and are commonly identified in environments experiencing periods of elevated relative humidity. In my experience, if you pulled spore traps or took surface samples in a home experiencing a patina of fungal growth on most surfaces, your laboratory analysis is likely to identify Aspergillus or Penicillium fungal structures. Many species of these fungi are considered primary colonizers, are xerophilic (i.e. dry-loving) in nature and are easily transported making them the principal fungi identified in a high humidity environment.
Why was the fungal growth on the surfaces of contents such as a mirror or metal surfaces? In essence, the porous materials and surfaces of non-porous materials served as reservoirs that collected organic materials such as dust and debris, as well as microorganisms (i.e., spores), two of the three primary elements needed for fungal growth to occur. The accumulation of organic matter provided the food source, add the spores and add the moisture from the water vapor and condensation, and over time the spores in these reservoirs began to germinate, grow and proliferate.
These conditions occurred over time and in many instances were discovered well after the conditions that caused them were no longer present. This created a scenario where a forensic approach was necessary. As experts, our interpretive skills for determining the sources of damage or fungal growth must be keen. Complex causes require a heightened awareness of both building science and the factors limiting fungal growth.
This will provide the knowledge needed to recognize and opine on the cause of the fungal growth. In this case study, it was the result of conditions that were abnormal and the result of multiple, compounding factors. ICM