There have been a lot of creative ways to provide emergency heat to buildings during no-heat situations, but maybe none as original as a project completed earlier this year at an upscale rural property near Reading, PA. 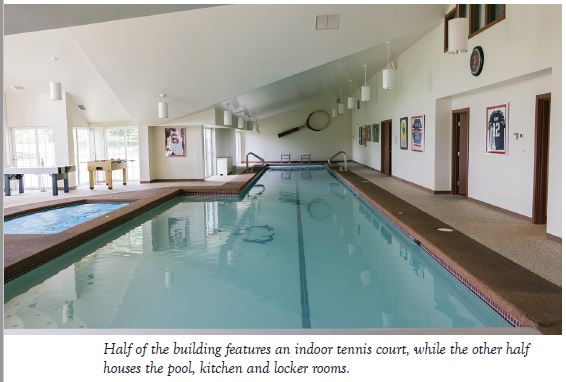 The 12,500 sq ft building, one of many on the 100-acre property, houses a heated pool, spa, full-sized tennis court, kitchen and locker rooms. When the old sectional boiler used to heat the facility failed mid-Winter, maintenance staff turned the pool water temperature way up. This not only held the natatorium at a safe temperature, but waste heat from the pool heating equipment kept the adjacent tennis court from freezing.

Mechanical contractor Summers & Zims in Atglen, PA, was called in January to handle the no-heat call. The 37-person company had previously served the property owner in 2013 for an installation of an extensive snowmelt system.

Joe Henderson, Plumbing Project Manager, responded to the call and found that the large boiler was beyond repair; a replacement was needed immediately.

“Jason Richards, at Hajoca, and I began designing a replacement,” said Henderson. “There was a 500-gallon fuel oil tank on the property for the hydronic system and backup generator, and there was also a liquefied petroleum (LP) tank for the pool heater.

“The problem with replacing the original oil boiler with a propane unit was that the existing LP tank wasn’t large enough to handle the additional load. Plus, a second LP tank wasn’t immediately available.”

Collaborative design
The design became a multi-boiler approach. The original plan was to install a single large sectional boiler, but, again, supply chain issues caused some trouble. After consulting with Dave Raabe at ROI Marketing, the companies learned that the boiler they wanted wouldn’t be available for a few weeks.

“This project took place at the height of the product availability challenge,” said Raabe. “The larger boilers weren’t available, so we looked at using three smaller MPO-IQ boilers, made by U.S. Boiler Co.

“These were immediately available. Ultimately, installing three boilers provided three stages of heat input for higher efficiency, and it also provided a level of redundancy. The smaller boilers also meant that the units could be wheeled into the mechanical on hand carts, instead of being field-assembled.” 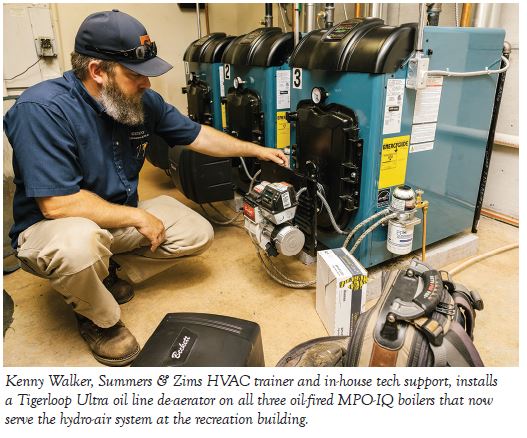 As a result, the design team selected three 189 MBH boilers.

This design yielded a three-stage oil-fired system, which is uncommon in a residential/light commercial application. It provided some redundancy and, more importantly, allowed the system to fire at lower input based on outdoor reset.

Controlling the boilers became the next question. Summers & Zims’ HVAC trainer and in-house tech support, Kenny Walker, has a great deal of experience with tekmar controls and had used the tekmar Boiler Control 274 for staging multiple boilers on numerous occasions. The property owner also wanted to remotely monitor the system through Wi-Fi, so the new tekmar Smart Boiler Control 294 was selected.

Rapid installation
Summers & Zims (originally Summers Brothers Plumbing & Heating) has been in the business since 1930. They merged with Zim’s Sales & Service in the 1970s, forming the company it is known as today.

Summers & Zims employees are known as “do the right thing” kind of people. Joe Henderson is a knowledgeable hydronics guy. When it came time to install the system in a hurry, it was clear the company could handle it.

For the install, Walker was joined by Todd Lease, head plumbing technician; Andrew DiEugenio, journeyman plumber; and Austin McGhee, apprentice. The boilers were rolled into the mechanical room and a primary-secondary piping configuration was used to connect them to the system loop. The fuel supply line to each boiler features a Tigerloop fuel oil deaerator.

“We install a Tigerloop on every oil-fired system we install,” said Walker. “They cut down on nonsense service and emergency calls by cleaning up ignition and burn, which creates less soot in the heat exchanger. We also like that they allow us to use spin-on oil filters, which catch small dirt particles and reduce nozzle failures.

“If the homeowner isn’t attentive to the amount of fuel they have left in the tank, running empty isn’t such a big deal,” he added. “The Tigerloop provides a two-pipe system from the oil pump to the unit. This way, the oil pump will self-prime, meaning the owner or the fuel delivery tech can simply hit the reset button on the primary control once oil has been delivered.”

Flexible fuel lines were used from the Tigerloop to the boiler’s Beckett burner. To provide easy access to the three-pass heat exchanger, the MPO-IQ features a hinged front door, where the burner is located. By using flexible lines instead of hard pipe, service techs can open the boiler without removing the fuel fitting at the burner. 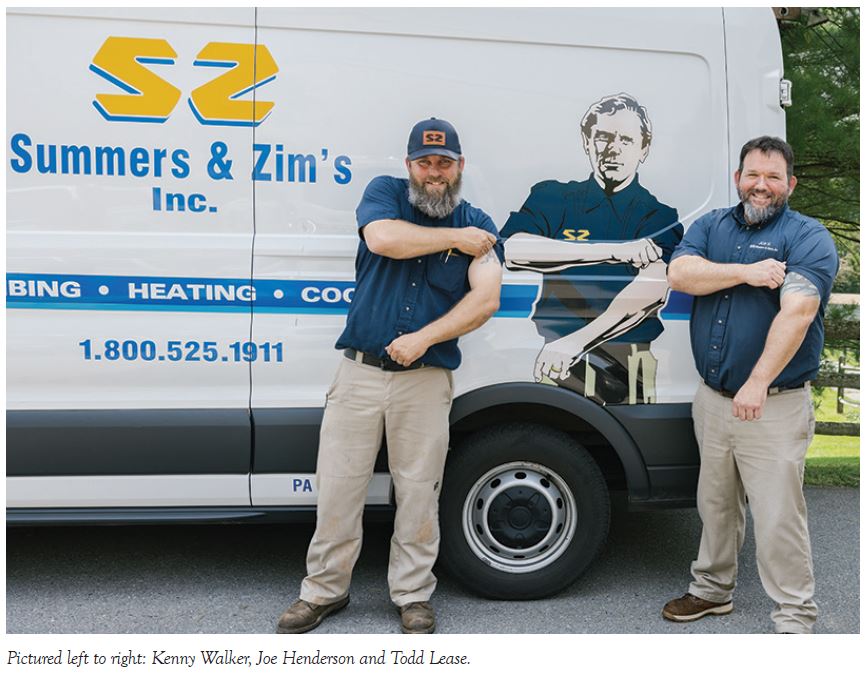 “Providing deaeration is even more critical on a multi-boiler installation like this because, the more times you tee off of the fuel line, the more opportunity there is for air to enter the fuel supply,” continued Walker.

Venting the boilers was done as deliberately as supplying the fuel. The existing chimney was large enough, but common venting the three units had to be done carefully.

“We couldn’t just run three, six-inch vents into a common stack, because the distance between the boilers and the main stack were slightly different,” explained Henderson. “The first two boilers join into an eight-inch vent, which increases to 10 inches as it picks up the third boiler and exits to the chimney.”

Control
When the original boiler failed, the property owner decided that he wanted to monitor the heating system regardless of where he was, and he also made the decision to sign a service agreement with Summers & Zims. For both of those reasons, Henderson wanted to find a control solution to stage the boilers and provide web-based monitoring; they also wanted to avoid the use of a complex, costly building automation system.

“Jason had recently told us about the new tekmar 294,” said Walker. “So when we bought the boilers from Hajoca, we also bought the control. The 294 is similar to the 274, but with more features, a touch screen, and most importantly, remote monitoring capability. It can also send me texts, emails and push notifications for a wide variety of alerts.”

The control stages and rotates the boilers, as well as handles outdoor reset, domestic hot water (DHW) priority, warm weather shutdown, etc. In a typical MPO-IQ boiler installation, the onboard boiler control features optional plug-and-play cards to provide outdoor reset, low-water cutoff and aquastat. In this system, the tekmar 294 replaces all but the low-water cutoff card.

“The 294 was easy to install, and I can pull up and make setpoint changes to the customer’s system at my office or on my phone,” said Walker.

Within a week of the old boiler failing, the new hydronic system was heating the building, and the pool heater was turned back down to its normal operating temperature.

This job—and the speed at which it came together despite supply chain issues—is a testament to contractors like Summers & Zims, who show up and do the very best they can. ICM