Written on: February 1, 2013 by Mike SanGiovanni

The lonely pickup sat for hours on a certain stretch of road on the southern shore of Long Island. Periodically, the silence was broken by the ringing of a cell phone or two. This was, in a sense, the first line of communication for OSI Comfort Specialists, one of the hardest hit oil companies feeling the wrath of SuperStorm Sandy on October 29th, last year.
In the truck were Phil Wurtz and his brother-in-law, Michael Levi, both taking calls from frantic customers whose heating systems were out. Wurtz is OSI’s manager of Marketing and Sales, and general office manager as well. He explained that after Sandy hit, there was considerable chaos: “There were times when the phones weren’t working at all, and we were having calls forwarded to management’s cell phones. I remember, the first few days after the storm, cell phone service was so horrendo
us my brother-in-law and I would drive out at night and sit in this one area of the road, about 20 minutes away [from the office], where we actually got some cell phone service, and we’d just take phone calls from people calling at night, or if they left messages, listening to voice mails. We wanted to make sure we got back to the people the next day. We’d sit in the pickup truck for a couple of hours, trying to have a makeshift night service so people had someone to call and talk to at the end of the day.”OSI was in the heart of Sandy’s storm surge. Even though hit as badly as most of its customers, the company never closed doors, except for the one night Sandy hit the south shore. OSI is headquartered in Oceanside, Long Island, situated just north of Long Beach, which is right on the water. It is not uncommon for storms moving up the East Coast, before they make that turn out to sea, to skim Long Island’s south shore on the way, so so 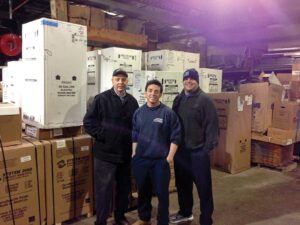 me effects of the weather are always expected.
“Anytime there are high tides, things like that, obviously there’s a threat, but we’ve been fortunate for the many years we’ve been here to not have had any water issues or problems,” explained Wurtz. So, with Sandy, maybe it might be a bit worse, but how bad could it get?
“When we heard how they were predicting the storm to be, we figured, if anything, we might get a maximum of a foot of water in the office, and we would have considered that catastrophic. We didn’t realize what we were in store for.”
Of course, they took the usual precautions. The day before Sandy hit was relatively quiet, everyone prepping for the storm, worried about their homes. Back at OSI’s office, “…we had started to lift things up that were on the floor—computers, things like that—and we put some stuff up on blocks or on the tops of desks….”
With that calm before the storm, things went orderly. That evening, the office staff was sent home early. Wurtz left around 4:30 or 5:00 himself; by then, the office was mostly empty, and local stores and shops were closing their doors. But OSI, like many service-oriented companies, needs to be open every day, all day, year around.“We always had a night person, one or two servicemen, a dispatcher and someone to answer the phones.” Typically, off hour 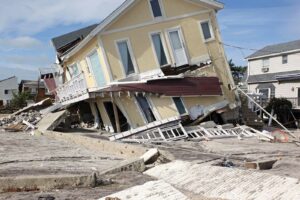 A house on Long Beach, on the southern shore of Long Island

calls are answered at OSI’s terminal, located in Far Rockaway, and it’s literally right smack on the water. We had the guy manning the terminal come to the Oceanside offices for the evening, thinking that, if anything, that area was going to be hit the hardest and we didn’t want him stranded out there.
“I remember closing up, telling them ‘Good night,’ and to be careful, then I headed home.”
Wurtz works with his brother-in-law, Michael Levi, whose father Richard, and his two brothers, Martin and Alan, are currently running the company started by their father, Irving Levi. Wurtz lives in Manhattan, but his brother-in-law lives only about two blocks away, in Oceanside.
“I knew we were going to get a lot of rain, and I was certain some systems were going to go down, so I decided I’d stay at his place and help him out in case he needed any assistance

over there. We had kind of hunkered down at his house, taking it easy. He had a natural gas generator, so we figured if we lost power, we’d still be able to watch a movie or something.”
In a little while, they began to notice that the wind had picked up, and water was starting to roll in. Little by little, as they watched from the house, the water crept up the street. Eventually, it reached the sidewalk. Then it worked its way up the driveway and finally, into the house.

The superstorm
Superstorm Sandy, actually a category 2 storm, was the largest Atlantic hurricane on record, at 1, 100 miles in diameter. Damages are estimated at $65.6 billion ($63 billion in the U.S.), with over 250 lives lost. Although it affected 24 states, the storm surge severely affected New Jersey and New York, flooding streets, tunnels and subway lines, and causing significant loss of power for many in the area. It was the second costliest storm on record.
Some estimates by Oilheating industry experts put the loss of home heating systems a formidable task for heating oil and HVAC companies striving to help homes and business repair or replace their heating and airconditioning systems.
For example, ICM’s sources say at least 100,000 heating systems and oil tanks need replacement or repair. On Long Island, 40,000 homes were severely affected, with another 30-40,000 in New Jersey. Just coming up with replacement equipment seems a Herculean task, not to mention the manpower needed to install replacement equipment.
For more information, also visit www.oilheatingstorm.com.

—————————————————————————————–
“We had a few gas powered pumps and we were trying to run them to keep the water out of the garage area, but at that point, we started to think, if this is going on here, what’s happening two blocks away, down at the office?\
“We tried to get in touch with the dispatcher at that point. Meanwhile, all the transformers were blowing in the streets, power lines were going down, power was out everywhere and the water was rising and rising, with no end in sight.”
They were able to contact Wurtz’ father-in-law, Richard, who lives about 15 minutes away and kept him apprised of the situation. Because a number of OSI’s customers are nursing homes and similar facilities, as well as hospitals, Richard had taken an oil truck home that night (he lives closer to the Rockaways), reasoning he could get going early in the morning to take care of his customers’ generators.