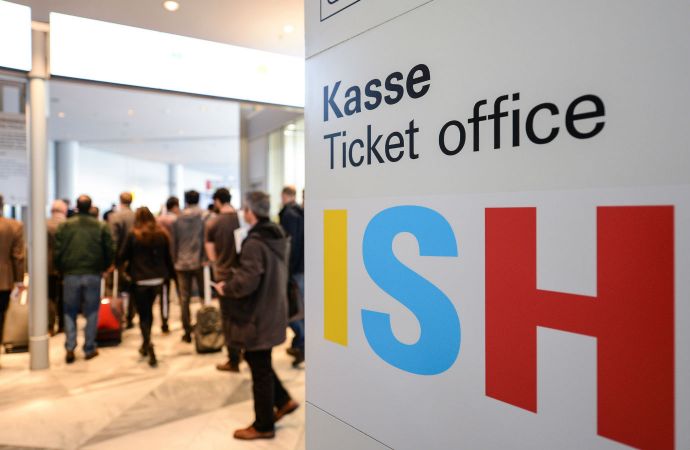 By Nina Masson, hydrocarbons21.com—
As evidence of the transformation that the heating and cooling sector is going through in Europe, brand new propane heat pumps saw the light last week in Germany.
Models from manufacturers like Heliotherm, Glen Dimplex, Alpha Innotec and NIBE were revealed last week at ISH – the Bathroom Experience, Building, Energy, Air-conditioning Technology, and Renewable Energies trades
how – in Frankfurt, Germany from 12-16 March 2017.
The most eye-catching heat pump on show was the so-called “world’s most efficient geothermal heat pump, thanks to the use of R290,” according to Rudi Bellinger, who works in sales support at Heliotherm. Its seasonal coefficient of performance (SCOP) reaches the record high of 6.7.
The AIT (Austrian Institute of Technology) research institute and TÜV in Germany (Technical Inspection Association) tested the units in early 2016. The first units were sold in mid-2016.
Heliotherm‘s primary motivation for investing in propane technology was “the energy efficiency advantages it brings,” Bellinger told hydrocarbons21.com.
Other new R290 HPs on the market
Glen Dimplex, a consumer electrical goods firm headquartered in Dublin, Ireland also presented a new R290 heat pump at the show –
the System Zero HP.
“The unit can be used for both heating and cooling,” said Volker Rühle, Director, International Sales Heating & Ventilation at Glen Dimplex.
Sweden’s NIBE has also been producing an exhaust air source heat pump with R290 since 1998. The exhaust HP works by taking the heat from waste air leaving the building, pumping it back in to provide heating and hot water.
The latest models use 400g of the refrigerant R290 and are for outside placement.
Roger Johnsson, NIBE’s product manager for exhaust air heat pumps and ventilation, told hydrocarbons21.com: “We are not talking about the refrigerant when we talk to our customers. We want to offer the best products, and R290 allows us to do so.”
EU f-gas promoting innovation
Johnsson believes this will soon change once
f-gases are phased down under the EU F-Gas Regulation. “We believe customers will become more aware of the environmental dimension of the refrigerant being used,” he said.
He feels NIBE is well-positioned to take on this challenge, with nearly 20 years of experience in natural refrigerants. “It is no secret that we are actively looking into R290, because we see propane as one the refrigerants of the future.”
On the other hand, Germany-based company Alpha Innotec (AIT) presented its heat pump model also using propane. Andreas Schrof, Area Sales Manager at AIT, said the company’s 20 years of experience in developing R290 in heat pumps has paid off. “The system is our most popular product overall,” Schrof said.
With a very silent operation at 61 dB, AIT’s heat pump is available in 5kW, 7kW and 9 kW
models, which can then be combined into two units to achieve a total combined capacity of 18 kW. It also is following the trend of being used not just for heating but cooling as well.
The product by AIT presented at ISH – the alira LWDV air-water heat pump – uses inverter technology, something new in the European heat pump market.
“We have an industry-leading position for natural refrigerant-based heat pumps, which we intend to keep. To our knowledge, we are the first to launch an R290 heat pump using inverter technology,” Schrof said.
“The R290 HP price is [also] fully comparable with models of similar capacity and sound levels, so there is no cost disadvantage for the customer,” he said.
The ISH tradeshow served as further evidence of the increasing interest in hydrocarbon-based technologies for heating and cooling applications.
Article courtesy: hydrocarbons21.com