Post-Sandy Response is still “What to do? for many

It’s no secret that tropical storm Sandy caused extensive damage to thousands of homes and heating systems.However, “what to do” as a result of Sandy’s damage might as well have been a secret because many people didn’t have a clue and in their haste to get their, or their customers, heating systems operating, they exposed people to additional problems in the future.
NORA quickly stepped up to the plate and put together a “Flood-Damaged Oil Appliance Checklist” that was distributed throughout the industry and which appeared on the pages of this magazine*. Nora’s checklist has proven invaluable in helping the Industry restore heat and hot water to their customers as quickly as possible.
Unfortunately, many contractors haven’t seen the recommendations—or if they have, they haven’t followed them. In addition, some areas have had what we used to jokingly call “Christmas Contractors,” individuals offering to get damaged heating systems working for a flat fee. (Christmas contrac
tors are those people who get a screwdriver, flashlight and adjustable wrench for Christmas and then decide that they can fix anything.)On the gas side, we’ve seen people simply light the pilot light of a unit that was under water and then walk away once the unit starts. On the oil side, there are some who remove water from the tank, hit the reset and hope for the best. As NORA’s checklist clearly demonstrates, after exposure to waste water, every unit MUST be thoroughly checked, several components must be replaced and the burner must be properly adjusted to manufacturers’ specifications.
In addition, special attention must be paid to a major component that is often overlooked in these situations—the oil t 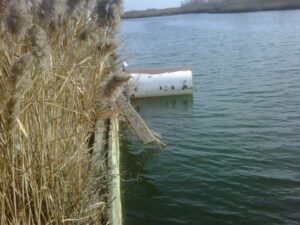 ank. Many people believe that as long as the tank didn’t accumulate water during the storm, it’s okay to use. Some believe that those tanks that did accumulate water simply need to have the water removed before the tank is put back into service.
Tank manufacturers have pro-actively issued notices explaining what they recommend after exposure to flood waters, and basically, what they recommend is that the tank be replaced.
If you read those notices, you’ll have read recommendations like this regarding steel tanks:
“Please note that any storage tank that has been subjected to flood waters and potentially had flood waters introduced to it or in it, should be taken out of service immediately and not be reused. Contaminants present in flood waters (sea water, brackish water, sewage and other petroleum products) may result in accelerated corrosion and potentially cause a safety issue and/or risk of a hazardous fuel oil leak.”
In regard to polyethylene/steel tanks, one of the manufacturers’ recommendations is:
“Tanks installed indoors that have been exposed to flooding and have shifted or floated as a result are particularly susceptible to severe flexing of the nozzle connections molded into the inner tank. This occurs when the tank shifts or floats while remaining connected to the rigid fill and vent piping. If evidence of severe flexing of the tank nozzles has occurred, the tank should not be reused.”
Manufacturers of both steel and polyethylene/steel fuel oil storage tanks have stated that tanks exposed to flood waters are not covered by manufacturer’s warranties.
In addition, some municipalities have weighed in with restrictions that prevent the continued use of tanks subjected to floodwaters.
The New York State Department of Environmental Conservation issued guidelines before the storm regarding precautions for tank owners to follow. Among their recommendations:
• “The tank should be protected from floating or tipping over by flood waters or high winds
• The tank should be protected from falling limbs, floating debris or high currents
• Connections to the tank (fill pipe, vent, gauge, bungs) should be water tight
• If the fill port or top of the vent could be flooded, the cap to the fill pipe should be securely fastened and the vent pipe should be extended to above the worst case water level.”
While all of their recommendations make sense, shouldn’t all tanks be maintained this way? Why should tank owners wait until a storm is coming to protect their tanks?
Regarding damage from storms—we’re not doing our customers a favor by ignoring the oil tank when we restore their heat after the storm. When we replace storm damaged systems, we should also replace any tank that was exposed to flood waters or damaged in other ways.
Going forward, we can’t let tanks operate “out of sight and out of mind.” It’s much better to address the tank situation before there’s a problem so we can avoid future tank failures and oil spills.