ICM continues its interview series chatting with Jackie Hart, VP Operations, Hart Home Comfort in Oakdale, NY. Hart has been one of the earliest adopters of low-carbon renewable fuels and to this day, is one of the most progressive marketers of high blends of biofuels.

JH: Back in 2007, my father, Ray Hart, who founded the company, felt that we, as an industry, weren’t doing enough environmentally for future generations, including his young grandchildren. We knew that sooner or later; customers would become interested in “Going Green.” To him, having a product that was sustainable, not only for us, but also for U.S. jobs, was and still is extremely important to him and our entire family. He therefore made the decision that we were going to create an infrastructure to provide an environmentally responsible and sustainable fuel to our customers.

ICM: It seemed like a choice of conscience, that this was the right thing to do.

JH: At the time [2007], biodiesel was not anywhere close to heating oil on the MERC—it was more expensive. To use biodiesel would have absolutely no financial benefit to us whatsoever. Also at the time, our initial investment in the injection blending system at the terminal was $250,000, but my father felt like this was the way it was going, that it was the right thing to do and that somebody needed to take responsibility.

ICM: In 2007, the discussion around biodiesel and bioheat was that it is a renewable, sustainable, U.S.-made fuel from U.S. farms. This was before the hard push to reduce greenhouse gases in our industry, which is the driving force behind the current transition to low carbon liquid fuels.

JH: We now believe it’s the way that the industry is going to go and it is for our own survival. At the time, we started with just a B5 blend; we currently deliver B100 to ten homes to evaluate it. It has taken a very long time for some of our business associates and people that are in the industry to jump on board with this. However, right now, we’re faced with New York City banning new fossil fuels in new construction and some NY counties (Nassau, Suffolk) and towns out east, including the Hamptons, banning any fossil fuels in new construction. The companies in our industry are forced to really look at what’s really happening here and what’s going to happen if they don’t make a move.

ICM: In 2007, your dad says, “I’ve got to do the right thing here for the environment, for my family, for my community.” He invested a fair amount of money to get off the ground with the injection. In those first few years, were there any specific obstacles that the company hit?

JH: Our biggest obstacle was trying to figure out how we were going to get product. Fortunately, we were able to reopen a rail spur on our property and we have rail cars that come in with biofuel. For the first couple of seasons, we had issues such as what other types of feedstocks can be used or what types of additives are out there so that if it’s freezing outside, the fuel doesn’t gel up and become unusable. There were those in the industry who thought that this was never going to work and we were never going to be able to use this product. It was just going to contaminate everybody’s system and rot everybody’s tank. We dealt with customers who felt that way, as well as some suppliers. We also had those who felt that the unusable part of the soybean that we utilized was taking food away from hungry families. 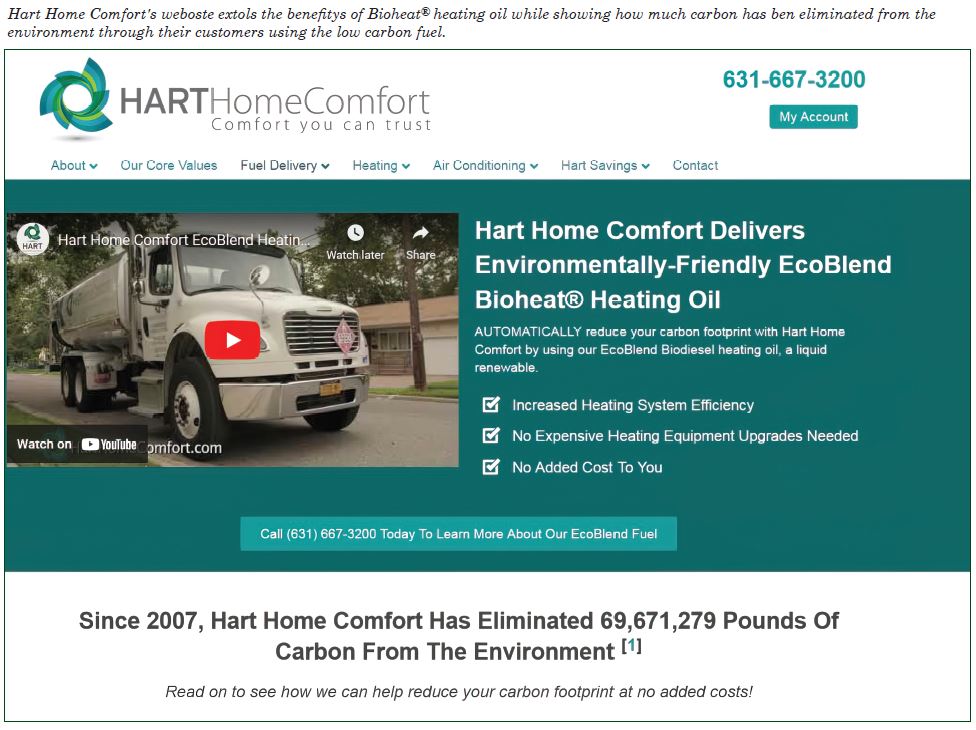 ICM: You do your own blending, which means you have your own bulk plants and you are handlingB100. How are you managing that in the cold weather?

JH: We wrap and heat all our terminals’ piping and we treat all of our product—both at the plant and with the individual bottles that go into the oil trucks. We change feedstocks to those more manageable in cold weather.

Most of our customers are on B20 to B50. Customers in Queens or Nassau County (NY) are getting above B20 up to B50 directly from our terminal. We try to keep Suffolk County at B20. This equates to approximately 5,000 customers in the B20-B50 range and another 5,000 with B20 and you have a handful of B100, which is part of a field test. We don’t really have any issues with freeze-ups.

ICM: Can I assume that you deliver to very few above-ground, unprotected tanks?

JH: We do have many Long Island homes that have outside, above-ground tanks and we make sure that this oil is treated. Drivers can put the chemicals in the tanks and treat it at the truck level.

ICM: What about the delivery fleet with B50? Does it ever have a cold flow issue while they’re sitting outside?

JH: Mainly for shrinkage reasons, we don’t load trucks the day before. If it’s going to be to be below freezing, we load up in the morning.

JH: We have heard from our technicians that the nozzles are cleaner than they had previously been due to the lower carbon products and the addition of larger blends of biofuel. We recommend now that customers have a cleaning every 12–18 months; even at that point, technicians say that the parts are coming off clean. We have seen a reduction in the number of service calls, which was contrary to what a lot of our technicians thought in the beginning.

When we started this in 2007 at B5, my father would call the service department every day, asking, “Is anything happening…what’s happening?” There were no reports of service issues, so within a month he said, “Ok, let’s just go right to a B 20,”and still nothing happened regarding unusual service calls. Within two months, we had changed from a B5 right to B20. We’ve been providing a B20 since 2007.

ICM: How about the higher blends up to B50?

ICM: You mentioned that some of the service techs were reluctant in the beginning. How about your employees across the board? Was it hard to get employee buy-in? Did you have to train or reach out to technicians and customer service representatives to pull this off?

JH: The office staff went along with what we were doing. We realized that they really needed good, solid information for customers who were calling. We therefore came up with a list of questions and how customer service representatives should address them. We sign everybody up for informational webinars because there’s always something to learn, always refreshers and reminders and always a customer who’s going to ask a question you hadn’t thought of. Our core group of ladies and gentlemen here has been through all of that, and they are really the experts. I can hear them from my office and I think, “OK, this is pretty good stuff.”

ICM: Let’s get to where it really counts—your customers had a lot of questions in the beginning and you trained your customer service people to answer those appropriately. What is the customer reaction then?

JH: We’ve done a lot of e-blasts, as well as mailings when that was the appropriate step to take. We’ve done leave-behinds and we’ve provided education through the field via technicians or drivers who answer questions. For the most part, customers don’t care as much as you may have thought about the benefits of biofuels because they’re very sensitive to an extra 5¢ a gallon, even with a 20¢-per-gallon New York State tax rebate. However, the people who are interested in Green products—they want to know when they can get on our B100 list.

We still have a very few customers who say, “Don’t give it to me, I don’t want it, I’m not taking it.” It requires constant education to say, “Listen, even if your previous company didn’t tell you that they were delivering biofuels, they are, we all are. New York has a law that states this is a mandate, and this is where we’re going.” We provide them with educational materials so they can begin to appreciate what we are doing.

ICM: Do you use your bioheat story as a hook for new customers? Does it attract them?

JH: Yes, we really have tried to attract new customers with it. We do use our story, which is all over our website, YouTube page, etc., and it works. We do a lot of marketing on Facebook and social media and Google AdWords.

The problem is that customers don’t get one consistent message from the oilheat industry. If they hear a message from us, they don’t realize that this is a big force that’s going to move them forward with a more sustainable product.

ICM: If the industry had a consistent message, what would it be?

JH: That Bioheat is here, it’s sustainable and it doesn’t require any system modifications. It’s not going to cost you thousands of dollars to change to a different heat source. It gives you the choice of fuel provider and an energy source. Bioheat is what we have already, and we’ve already been working on it. It’s already something that people are using and delivering and have been developing.

ICM: Where do you see Hart Home Comfort going with this? What is your long-term goal?

JH: We want to be completely B100 in the next 10–15 years, which is not really a long time for us because we’re innovative and we spend money on technology all the way down to our drivers and customer service representatives. We are committed, as individuals and as a family, to increasing bioblend and providing a more sustainable product and industry. We want people to recognize that we are doing something for the environment.

I really feel that it’s vital for our survival, as well as that of other businesses, to really take this seriously. If we don’t all start to get together and move forward, policymakers will put us out of business. We’re passionate about this industry and that’s why the majority of my family has been in it for 40 years. ICM