The New York Oil Heating Association (NYOHA) is helping a teacher in Bronx, NY, incorporate clean-burning Bioheat® fuel as a teaching tool in an interdisciplinary approach to HVAC training.
Peter Gonzalez is teaching the science of Bioheat® fuel – as well as math, chemistry and
English – to 17 Bronx Design and Construction Academy juniors this fall, with NYOHA’s support. In addition to arranging for 150 gallons of pure B100 Bioheat® fuel and equipment to be donated by AMERIgreen Energy and Schildwachter Oil Company, Rocco Lacertosa, NYOHA’s CEO and a member of the school’s HVAC Advisory Board, recently visited the classroom to speak directly to the students.
“New York City has mandated a 2 percent biodiesel blend, and one of the things I’m trying
to do is educate the students on Bioheat® fuel and the importance of the industry going green,”Gonzalez said.
During the classroom session, NYOHA help 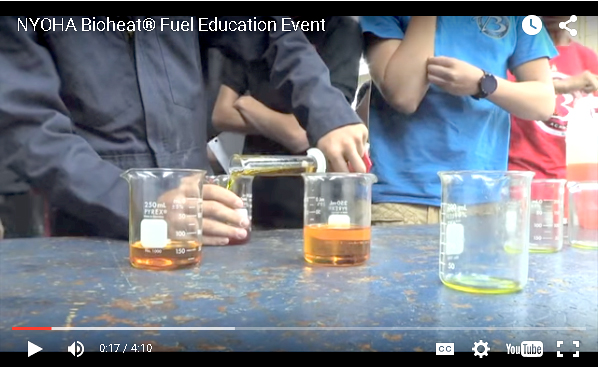 ed the students gain insider views of the
Bioheat® fuel industry. Lacertosa spoke about work opportunities in Bioheat® fuel companies, and AMERIgreen Energy’s Michael Devine provided an in-depth look at the environmental benefits of Bioheat® fuel as well as the fuel’s appeal to consumers. Peter Schildwachter, of Schildwachter Oil Company, also visited the class and donated new equipment.
“We are very proud to support the excellent work that Peter Gonzalez is doing to help
prepare New York City students for a future in the Bioheat® fuel industry,” said Lacertosa.
Gonzalez has devised a curriculum of exploration in which his HVAC class learns through
experimentation and reporting. The students are blending small quantities of heating oil and biodiesel and paying careful attention to the blend ratios. They burn various Bioheat® fuel blends up to 99 percent biodiesel in heating equipment and use combustion analysis tools to profile the emissions at each level.
“NYOHA has been tremendously helpful to the school and its students through the years,”
Gonzalez said. “The transition to Bioheat® fuel is helping New York City reduce emissions and create a healthier environment. If my students can learn about this fuel, they can help make New York a greener city.”
Experimenting with different blend levels is a timely exercise, because the New York City
Council is now considering a proposal to raise the biodiesel blend level to 5 percent in 2016 and 20 percent by 2030. “It is important that the blend level goes higher to make the emissions cleaner,” Gonzalez said. “Our work here parallels what the City is doing to be an environmental leader.”
Gonzalez has recruited colleagues Jonathan Brown, Nathaniel Thayer Wight, Adam Ellias
and Alrick Crowe to broaden the scope of the HVAC course to include mathematics, chemistry and English. Brown, a chemistry teacher, said he is helping the students evaluate the design of their experiments to ensure that they are generating valid results.
Math is coming into play as the students learn to blend fuels in specific ratios and analyze
the components of the combustion gases. The students are sharpening their English skills as they write reports about their experiments.
Gonzalez increases the level of engagement by letting the students design their own
experiments. Rather then tell them what blend ratios to use, he asks them to make those choices and report their results accurately.
New York City created a new standard for heating oil in 2012 when it required all fuel
companies to use a blend of ultra low sulfur heating oil and at least 2 percent biodiesel. In
addition, New York State requires the use of ultra low sulfur heating oil, which has 99 percent less sulfur than traditional heating oil. As a result, the heating oil that heats many New York City homes and buildings is the cleanest in the country.
As “the Voice of the Oilheat Industry in the New York Metropolitan Area” representing full
service fuel dealers and auxiliary industries, NYOHA is committed to ensuring the delivery of high quality products and services to consumers in New York City’s five boroughs. Our membership  collectively provides over 50 percent of the total energy used in the Metropolitan area – supplying homes and businesses with an efficient energy source and contributing more than $1.5 billion to the regional economy.