The new so called unconventional drilling techniques (hydraulic fracturing or fracking and horizontal drilling) that has unlocked natural gas deposits trapped in shale rock formations are also unlocking crude oil that is also trapped in shale rock formations. Although not frequently covered by the mainstream media, most people are familiar with is the Bakken Shale Play* beneath North Dakota. That reserve is estimated to contain 4.3 billion barrels of recoverable crude oil. Currently, the Bakken is pro- North American Oil Reserves are Plentiful and Growing Bakken Oil Shale Play *When a geographic area has been targeted for exploration due to favorable survey results, well logs or production results from a new or test well in the area, the oil and gas industry uses the term “play”. When it is decided there is an economic incentive to drill there, the area comes into play. Source: The Eagle Ford Shale Blog. 34 ICM/May 2012 AEC UPDATE ducing 500,000 barrels per day and in 2012 is expected to produce more oil than will be produced in Alaska.
A similar Shale Play, Eagle Ford, below southwestern Texas, is estimated to contain 3.35 billion barrels of recoverable crude oil; and yet another recently discovered Shale Play lies beneath the State of Ohio, known as the Utica. There are no estimates on what the Utica may hold, but it is expected to be one of the bigger Plays. In total, U.S. oil production of “tight oil”, as it is commonly referred to, has grown from 150,000 barrels per day in the year 2000, to 1 million barrels last year, and is predicted to further grow to 3 million barrels per day by the year 2020. 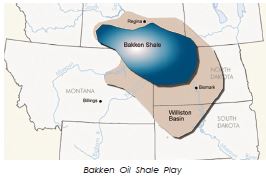 All of this new oil production on top of existing, more conventional, production has catapulted the U.S. to the world’s third largest producer of oil behind Saudi Arabia and Russia. Goldman Sachs recently predicted U.S. oil production will continue to grow to occupy first place by 2017. Already the U.S. has become a net exporter of oil measured in terms of dollars, exporting mainly refined gasoline, diesel fuel and jet fuel. As a result, the amount of oil we import has dropped from 60% in 2005 to 49% in 2010, with the largest portion of imports coming from Canada. Demand for gasoline and other refined products has declined somewhat over the last couple of years, so some of the reduction in imported oil is the result of weaker demand.
If we expand our view from the U.S. to North America, Canada adds huge amounts of oil to the market. Currently we are importing 590,000 barrels per day from the Alberta oil sands, a volume that could increase to 1.1 million barrels per day if the controversial Keystone XL Pipeline ever gets built.
The Canadian oil sands, also referred to as tar sands, is estimated to hold 175.2 billion barrels of crude oil, making it the third largest known reserve of recoverable oil in the world behind Saudi Arabia and Venezuela. Canada is producing 1.7 million barrels per day today, making it the fifth largest producer in the world behind Russia, Saudi Arabia, the U.S. and China.
If we take one more step back and look at the Western Hemisphere, we see a very large and growing underground reservoir of oil running from Alberta Canada through North Dakota and Texas, on across the Gulf of Mexico, through Venezuela and on to the offshore coast of Brazil. Brazil has discovered large reserves of oil in deep waters off its eastern coast, lying beneath a mile deep layer of salt. By one estimate, Brazil could be producing 4.5 million barrels of oil a day by 2020, nearly twice the output of Venezuela.
So what does this all mean? Well, as production continues to grow in the U.S., our energy independence and energy security will become stronger. If we build the Keystone XL Pipeline and tap deeper into the Canadian reserves, it will only enhance our energy independence and security and will surely begin to put some downward pressure on North American oil prices. But in the larger world view, we in North America, or the Western Hemisphere, may begin to see a shift in the flow of oil from the current Eastern Hemisphere to Western Hemisphere to a more North-South flow within the Western Hemisphere. If that happens, it will surely change the world energy landscape for generations to come.