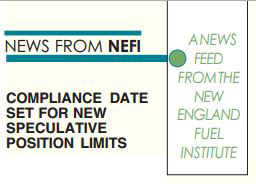 Speculative position limits (or, individual limits on commodity positions held by speculators) resulted in stable and reliable commodity markets for generations. In recent decades, deregulation of futures and swaps exempted huge swaths of the energy markets from having to comply with position limits. That is all about to change. On Friday, October 12, 2012, all spot-month futures and swaps contracts in 28 listed commodities including crude oil, heating oil and gasoline must comply with position limits as required under the 2010 Wall Street Reform law. It will be a major victory in the long road to stable, transparent and accountable energy futures and swaps markets.
The compliance deadline was set when the Commodity Futures Trading Commission (CFTC) officially published a rule defining “swap” in the federal register one week ago. Under the final position limits rule approved by the CFTC last year, the “first phase”
of implementation – spot month speculative position limits – was to become effective 60 days after the swaps definition was published. The new requirement will restrict trades to
25 percent of deliverable supply. The publishing of the swaps definition last Monday also sets a January 10, 2013 compliance date for reporting of swaps data. That is important because “phase two” of the final rule imposes position limits in non-spot month (near-month and all-month) contracts after twelve months of data collection. Therefore, we expect the final position limits rule to be fully implemented sometime in early 2014.
We expect the financial services industry to push back on this and to demand more time to comply. They also have a pending lawsuit meant to block the position limits rule in the U.S. District Court. A resolution to that case should be forthcoming. While we are concerned about the strength of the final position limits rule and its ability to restrain excessive speculation, we must acknowledge this historic and unprecedented achievement. NEFI, PMAA and their allies have been fighting to return position limits to the commodities markets for nearly five years. We must endeavor to protect this achievement and to
strengthen this new rule whenever and wherever opportunities arise.