Nashville HVAC Service Goes All In To Hire Veterans

By Blake Farmer, Nashville Public Radio—
Plumbing, electrical and HVAC repair companies are beginning to see the military as a prime talent pool. Handyman services have had a tough time recruiting in recent years, especially as the job market improves. Perhaps none have turned theirattention to former service members like Nashville’s Hiller Plumbing, which has made Fort Campbell into almost a sole source of manpower.
A dozen guys are all on their hands and knees. They’re poking their heads under sinks, getting plumbing tips along the way. Markus Burns is making sure the toilet he just installed isn’t leaking. 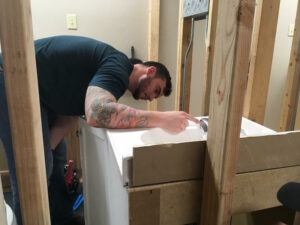 Markus Burns spent six years in the infantry and is training to become a plumber.

“Take your paper towel and run it around that edge,” instructor DeWayne Wilcox says, flushing the toilet several times to test the seal.
The folded paper towel comes up dry. Success.
This is Hiller Plumbing’s training facility on Murfreesboro Road. Nearly everyone here is about to get out of the Army. Burns, who sports a sleeve of tattoos, spent his military career toting a rifle in the infantry. He flirted with going to college but says he’s “not an office guy.”
“I just wanted to learn the trade because the trade, that’s in high demand right now,” he says. “You know, everybody’s got four-year degrees, but no one knows the trades anymore.”
Burns didn’t consider a career in plumbing until Hiller approached him on post with this opportunity. He likes that he can start making money the day he gets out of the Army this summer.
“For me, I’ve got a family. I’ve got a wife and a daughter, so I need to set myself up,” Burns says. “I’ve been doing a job in the military for almost six years, and the type of work I was doing doesn’t translate to civilian world.”
But the skilled trades are finding former service members to be a good fit. And in fields like plumbing, national data shows a bigger shortage is looming as plumbers retire.
“Obviously, one of our biggest problems is getting good, qualified people to come work for us,” company founder Jimmy Hiller says. 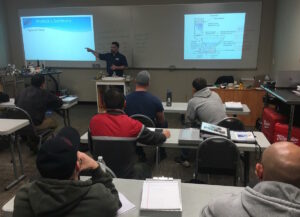 Hiller Plumbing owns Total Tech, which is a trade school that can accept tuition payments from a former service member’s GI Bill.

While kids in high school aren’t launching into the trades like they used to, Hiller contends many of them would be better off — solid pay and job security. However, he’s not thrilled with the prospect of recruiting teenagers. Soldiers have some life experience and a certain mindset that goes well with this line of work.
“They do a lot of things like discipline, right. You’ve got to get up at the right time. You’ve got to show up for roll call. They know how to dress. They have the uniform,” he says. “They also have the systems mentality— doing things by procedure.”
They can also check all the boxes.
“Somebody that you know is going to pass a background check,” says Daphne Frontz, Hiller’s lead recruiter.
She adds that they’re more motivated than many job candidates.
“They have families to provide for,” she says. “They’re terrified when they get out of the Army. They don’t know what they’re going to do, so we’re giving them a new career path.”
Hiller has bought into the idea so much that it now sends a bus to Fort Campbell every morning to pick up dozens of trainees and takes them the hour home each night.
Around the country, HVAC, plumbing and electrical companies are experimenting with similar recruiting efforts, like a non-profit job board out of Minnesota called Troops to Trades.
Hiller has a leg up considering it runs its own for-profit trade school, Total Tech, where soldiers can spend their military educational benefits. The government also subsidizes the living expenses of veterans during their apprentice period as plumbers and electricians. That’s made it easier for former sergeants to swallow what could be an initial pay cut at $15 or $16 an hour.
Interest is only growing, Frontz says.
“Our first class we had 14 soldiers. Our last graduation, we just had 42,” she says.
Dakota Briggs was one of the first 14. He’s nearly a year in, and says the transition to civilian life has been deceptively overwhelming.
“It’s very scary,” he says. “You go from health insurance, getting paid every two weeks…because when you’re in the military, all that’s taken care of.”
Briggs says he couldn’t see how he would support his wife and daughter while going back to college. So HVAC repair made sense.
“I always like to work with my hands. I’m from the South, so I know everyone needs air conditioning. So I learned a trade I knew I would always be able to survive with.”
It’s a different kind of survival skill than Briggs learned in the Army, but perhaps just as important to him and his family.
Article courtesy: Nashville Public Radio