What if you could bill customers after they actually used your fuel, just a like a utility company?
What if this created a huge “barrier to exit”, enabling you to greatly increase customer retention and gave you a powerful magnet for attracting new business?
What if it were done in a way that also improved delivery efficiency and kept more people on automatic delivery?
And what if the company delivering this service actually provided the financing that allowed you to pay your suppliers within ten days, even though you didn’t bill your customers until after they used the fuel?
Sounds pretty revolutionary, right? That’s exactly what Paygo™ promises to deliver: a revolution in the way fuel companies offer, deliver and bill for fuel, with the power to transform the future of the companies that offer it.

Simple concept, huge implications
The idea of not paying for fuel until after it’s used isn’t new; it’s how electric and gas companys have billed for years. In fact, many utility companies promote this another reason to convert.  In the oil and propane business, this just hasn’t been viable—until now.

Paygo is the brainchild of Phil Baratz, CEO of Angus Energy, a company familiar to our readers as a leading hedging firm in the oilheat space for almost 25 years (In fact, you can read Phil’s column, Futures & Options, on the back page of each issue of the magazine).

In recent years, Baratz’s company has expanded to offer multifaceted services targeted at oil and propane companies, including business intelligence technology (BRITE) and financial consulting (Angus Finance).  This expansion was necessary to turn Paygo into a reality.

“I had the idea for Paygo while talking to an old friend and client, Marty Levy of OSI Energy on Long Island,” Baratz said. “Marty was complaining about the latest natural gas advertisement, which bashed oil companies for charging people before they used a drop of fuel. They said, switch to us and pay after you use it, not before. I thought, wait a minute, we could do that, too.”

What followed was a four year journey that brought Paygo from concept to reality, requiring millions of dollars and a huge investment of human capital.  Paygo needed to create the technology that would seamlessly integrate with existing delivery and billing software, establish financing, conduct market research to determine consumer receptiveness, apply for patents (Paygo earned its first patent in September), develop the promotional packages for partner clients to use with customers and prospects, and develop training programs to empower fuel company sales and customer service personnel, address regulatory issues, etc.

“If I had known just how much it would take to hatch this egg, I might have pushed it out of the nest,” jokes Baratz. “But I truly believe it has the power to transform our partner clients, and lift them up in a shrinking industry. We don’t want to just help our partner clients use Paygo to their advantage. We want to help them win—period.” 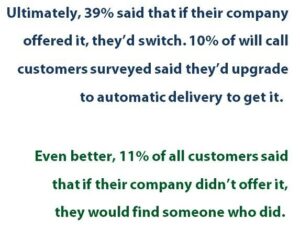 First, prove the concept
Given the enormity of the project, one of the first things Baratz needed to do was make sure consumers would be as excited by this as he was. He hired Rich Goldberg, President of Warm Thoughts Communications, Inc., to consult with Paygo, and to help determine the strength of the concept.

“Rich brought all these years of industry experience, along with a really unique understanding of what motivates the behavior of fuel customers,” said Baratz. “I wanted him to do a reality check, to make sure this really had legs, before we invested a huge amount of time, money and effort.”

To do this, Goldberg orchestrated a major market research study with oil and propane consumers in seven states: Maine, Massachusetts, Connecticut, New York, New Jersey, Pennsylvania and Maryland. He brought on a nationally respected market research firm to conduct the study, which included almost 1,000 fuel customers. It was perhaps the largest study of fuel customer attitudes in the last decade (see the sidebar for some of the results).

“Phil told me not to pull punches, to really get to the bottom of this,” said Goldberg. “The final report came in at over 198 pages. I knew we had something potentially very big when the researchers said they have rarely seen initial interest levels this high.”

What They Found
Among other things, the study found significant consumer dissatsifaction with aspects of the way fuel is delivered and billed, a dissatisfaction that can undermine your relationships. Some of this will not surprise you, but other aspects were unexpected.

For example, roughly one third of customers surveyed believe that their companies make deliveries when it suits the company, not them. Less than a quarter of all customers disagreed with the statement “my company wants to make deliveries when prices are highest.” Ouch! Furthermore, 37% did not feel confident you would not let them run out of fuel.

To make matters worse, the study quantified what many of us have noticed for some time: retention problems are getting worse. 33% of customers in the study had changed companies at least once in the last 5 years. A third of these, or 11% of the total customers, had changed more than once. Remember, this was a blind study with a cross-section of demographics in seven different states.

There is a connection between these patterns. As prices have gone up, and become even more volatile, the tendency to distrust has also risen. In the customer’s mind, if their company isn’t looking out for them (or worse, trying to take advantage), why shouldn’t they switch? 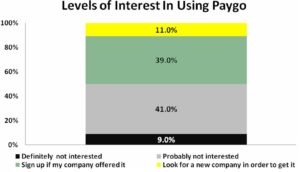 Increasingly, that’s exactly what they do—in part because there are very few “barriers to exit” and very little differentiation. To the average fuel customer, most companies look the same from the outside. Only 25% said it would be a hassle to change companies. Not surprisingly, propane customers indicated that it would be more trouble to switch, presumably because they had tanks that were owned by their propane supplier.

That’s where Paygo comes in.

What Customers like about Paygo that changes things
The main objective behind the research was determining whether customers liked the Paygo concept enough that it could make a real difference for companies facing these realities. Clearly, the study indicates that Paygo shows tremendous promise.

When the concept was first introduced, 25% of customers said they really liked it, and another quarter said they liked it somewhat. As they learned more, their interest grew even stronger.  Ultimately, 39% said that if their company offered it, they’d switch. 10% of will call customers surveyed said they’d upgrade to automatic delivery to get it.  Even better, 11% of all customers said that if their company didn’t offer it, they would find someone who did.

“That was really the money shot,” said Baratz. “It’s a big market out there. The idea that Paygo would get your company pursued by all those other customers was really meaningful.”

What did customers like most about Paygo? Among the big winners:

The ability of Paygo to differentiate a company was also tested, and came out very positively. When asked to describe a company who offered Paygo, the top five characteristics customers chose were: customer-oriented, innovative, progressive, affordable and flexible. Those are not bad attributes to own in your brand.

Customer enthusiasm began to manifest itself as Paygo started testing the concept with a few small fuel companies.

“We tape all the calls that come in on special phone numbers,” Goldberg said. “It was not unusual for customers to say things like ‘I can’t believe this; it is amazing. There must be a catch.’ But there isn’t.”

“I rejected the offer,” said Baratz, “because they wanted too much control. But the proof of the concept was there. They inspected everything like a proctologist, and came away impressed enough to want in.”

In part two of this series, we’ll explore what makes Paygo so attractive to fuel companies, as they struggle to grow in increasingly challenging market conditions.  We’ll explore Paygo’s impact on retention, sales, delivery efficiency and finance. Finally, we’ll meet some of the companies who have been testing Paygo with their customer base and learn why they believe it is truly a revolutionary approach.