Inside the Mind of Today's Home Heating Oil Customer

Written on: September 23, 2015 by Richard Goldberg

For many years, the oilheat industry has struggled to maintain market share in the face of significant challenges. Not surprisingly, differences of opinion have risen regarding how those in the industry should focus our efforts to fight for our future. Now, for the first time in years, we have substantial, quantifiable data to illuminate a pathway forward.
This spring, six oilheat associations, with funding from the National Oilheat Research Alliance (NORA), joined together to conduct the most comprehensive oilheat consumer study in almost 15 years: The Oilheat Consumer Perceptions and Attitudes Research Study.
Warm Thoughts Communications, Inc. was chosen to conduct the study, which ultimately included responses from almost 2,600 oil customers in Connecticut, Long Island, Maine, Massachusetts, New Jersey and Rhode Island. The results are treasure chests of insights that can help individual companies and industry associations defend their product and customers more effectively. 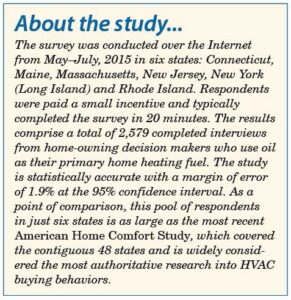 If you own an oil company, work for one or have a stake in the future of the industry, I encourage you to read carefully and share this with as many people in your company as possible. Some of the findings should absolutely change the way we advertise and the way your employees should be talking with customers when it comes to staying with oil. There is too much data to put in one article, so we will be examining aspects in a series.
Key Takeaways
There were over 50 questions in the survey, which allowed for substantial slicing and dicing of the data to draw correlations. For example, we asked baseline questions to obtain information such as the age of respondents, gender, number of years in their home, how they bought (e.g. pricing programs, service plans, etc.), location of their tank, whether they had another fuel source in their home or available in their area and more. We then cross tabulated these variables against other factors. We looked at options that included natural gas, propane, electric heat pumps, wood pellets and solar. We even tested some messages that have been used in pro-oil marketing.
Clearly, we have much to be concerned about, but you knew that already. While the vulnerability to conversion varies significantly from state to state, overall we are in a tough position. That being said, this study provides some reason for hope, and certainly helps clarify the targets and messages that will help our efforts pay off.
Below, I’ve summarized important findings of the summary on a national scale. If you operate in one of the states that sponsored the study, please contact your state association for a more detailed report of the findings in your area. I’ve broken findings into categories of “Bad News” and “Good News” followed by “What Matters” and “What Doesn’t.” First, let’s get the bad news out of the way. 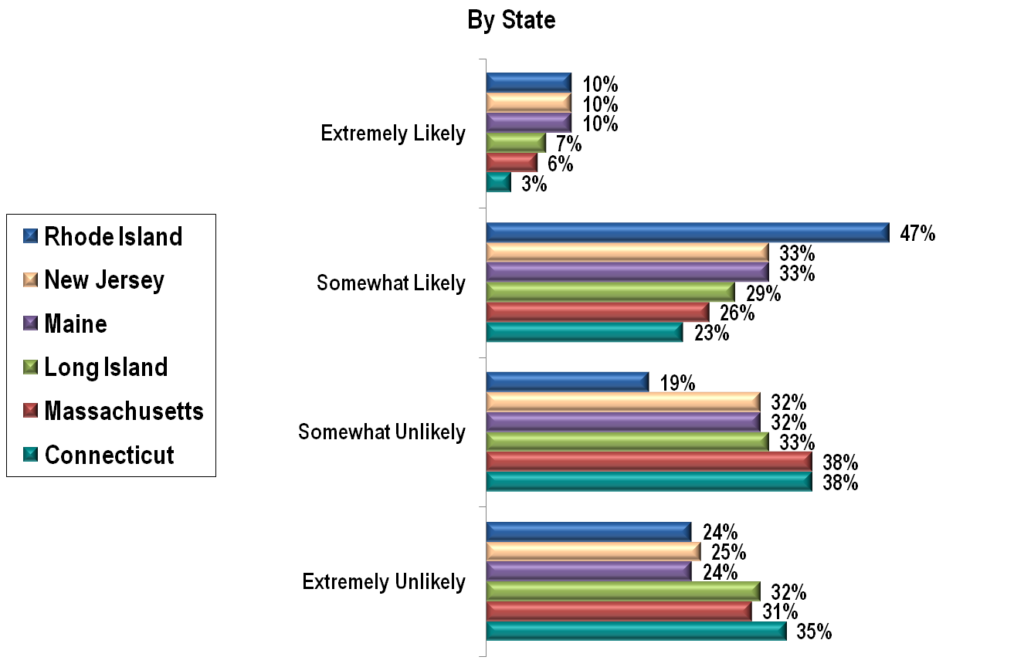 Likelihood to convert, by State (Click all charts for full size)

Bad News
The total number of oil customers looking to convert to another fuel
7% of total respondents say they are extremely likely to convert, and 29% say they are somewhat likely to convert.
The speed at which they wish to convert
Of the consumers who identify themselves as “extremely likely to convert,” three-quarters plan to do so this year or next.
Consumers’ fuel price expectations— perception hasn’t caught up to reality.
41% of all oil customers think their fuel costs will be higher than other options five years from now. Only 6% think heating oil will be less expensive than other fuels.

Likelihood to convert, by age

Reasons for not converting aren’t based on strong positives about our product
Of the people who say they want to stay with oil, only 18% say it’s because they are happy using it. The biggest deterrent is actually, “up-front conversion cost is too expensive,” followed by, “my equipment has a lot of life left.” Close behind is, “the process is too difficult.”

Forms of heating that customers are most likely to convert to

Younger consumers and new homeowners are particularly vulnerable
We are in terrific shape with customers who are 55 and older. Only 2% identify themselves as extremely likely to convert. Unfortunately, that number jumps to 7% in the 35–54 range, and a whopping 19% for those 18–34. Likewise, almost 20% of new homeowners say they are extremely likely to convert. That number drops by a third for those who have been in their homes for one to five years. Unless we figure out a way to make our product more appealing to younger groups, and more attractive to the folks moving into oil heated homes, the future is challenging indeed.

Forms of heating that customers are most likely to convert to, by state

The “extremely likely” group has company
While I have been quoting the number of people who say they are extremely likely to convert, the fact is, two to three times more say they are somewhat likely to convert.
Good News
Their bark is worse than their bite
While 17% of customers have seriously considered converting, only 7% said they were extremely likely to switch. What’s more, 20% of those who plan to convert say they will convert to solar. Forty percent believe it will cost less than $5,000 to convert. So while the interest in converting is greatly troubling, the data suggests that the more customers dig into converting, the more obstacles they’ll find.
Pricing trends were not fully appreciated
This study was conducted after the price decreases of last winter, which significantly closed the gap with natural gas, and also reduced some of the urgency to convert. However, it seems like consumers will need another year or two of lower oil prices to really rethink their calculations. If that happens, the playing field will certainly shift. But you already knew that, right?

Unrealistic expectations about break-even time
Nineteen percent of total customers think that their conversion will pay for itself in less than two years. Forty-six percent think two to five years, and they say they have little tolerance for waiting longer than that. The savings will come almost equally from lower fuel prices and improved efficiency. Those who say they are extremely likely to convert have even higher expectations. Of course, given the current outlook for oil prices and the true cost of conversion, their expectations are even more unrealistic.
Perceived efficiency parity
Generally, oil consumers believe that modern oilheat equipment and can be as efficient as any other equipment in the marketplace, even though we know there is an efficiency gap with the highest gas units. That’s a big deal. Those planning to convert expect that half of the savings will come from improved efficiency. Those efficiency savings could come from a new oil unit, and that hill is not as steep to climb.
Oil companies are trusted significantly more than utilities
According to the study, when presented with conflicting messages, consumers overwhelmingly place greater trust in their local oil company than they do in their utility company. This gives oil companies a tremendous advantage when taking our pro-oil story to the public.

Bioheat is a potential game changer for those thinking about converting
Consumers are looking for an emotional reason to continue using oil and to feel good about it. Bioheat provides that, especially to those who are most likely to convert. Of that group, 64% say that it would make them feel better about using oil, and more than 54% say that the presence of Bioheat makes them less likely to convert. That’s a really big deal. The problem is that less than 12% of oil customers know what Bioheat is.

Implications
As an industry, we have relatively little money to fight this battle. We need to play smart. We need to focus our efforts where they will do the most good; we need to come up with messages and tactics that will move the needle based on this data.
In our industry, diffusion often trumps focus. This happens in part because of the nature of decision making in associations responsible for administering advertising funds. It is much easier to stuff more angles into an ad or diversify the message to suit important members with different ideas than it is to be disciplined.
Until now, we haven’t had good data on what moves our needle. Now that we do, it will be important to avoid trying to cram our promotions with messages that make us feel good, but that miss the target—hit the outer ring, but miss the bullseye. We simply don’t have enough money or resources. 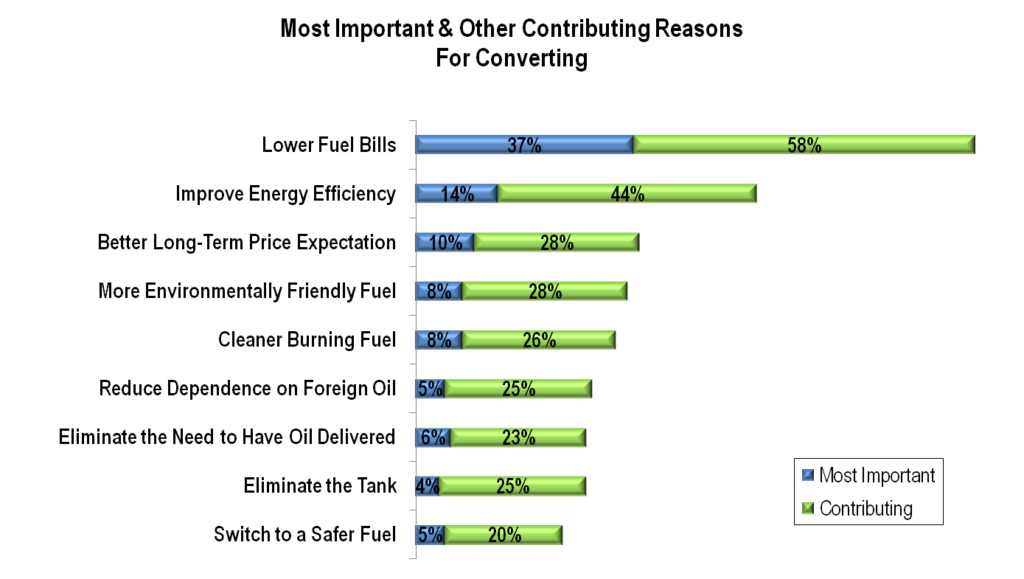 What really matters
People rarely make decisions based on just one factor. When we look at reasons people give for wanting to convert, we can combine primary drivers and all secondary considerations so that a fuller picture emerges. 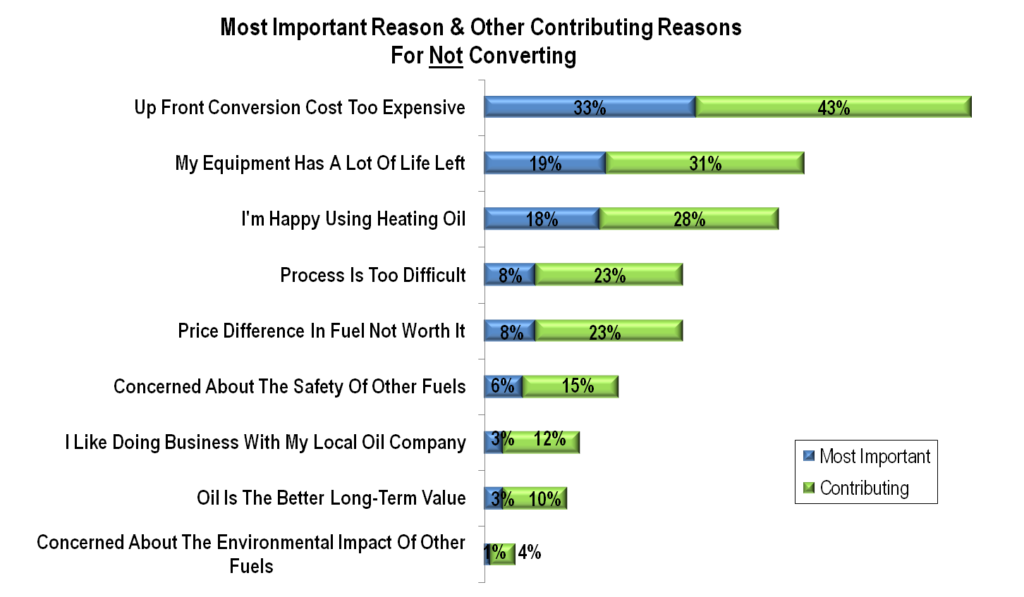 Summary
This ground breaking study would not have been possible were it not for the executives and boards of the organizations which chose to sponsor it: the Connecticut Energy Marketers Association (CEMA), the Fuel Merchants Association of New Jersey (FMANJ), the Massachusetts Energy Marketers Association (MEMA), the Oil Heat Institute of Rhode Island (OHIRI), the Oil Heat Institute of Long Island (OHILI) and the Main Energy Marketers Association (MEMA), and the support of John Huber at NORA. Many of them spent hours reviewing the draft questionnaire to make sure the results we obtained were authoritative and actionable. It takes vision and wisdom to seek answers that might contradict previous thinking.
The findings we shared above are important highlights, but not the entire story. We will be reporting more information in the coming months. Hopefully, this study starts a dialogue that gets more people doing more of the right things. That will only happen if people know about it, and do something smart with it. That’s where you come in.
If you’d like to obtain a PowerPoint presentation with more of the findings, visit www.warmthoughts.com/norastudy. If you have any questions, you can email me at [email protected]. You can also post thoughts or questions in the Heating Oil Dealer group on LinkedIn.
The Oilheat industry may be outgunned, but we do not have to be outsmarted.