There are only a few differences between gas and oil hydronics. An obvious one is that the burners and fuels involved are different. Controls on older equipment are, however, the same with some exceptions. In this series of articles I want to address the distinctions and how to work with them, along with diagnostics and how to solve problems between these two separate fuel systems. We will briefly address some steam related facts, but our focus will be on forced hot water systems used with gas—both natural and propane.
So far we have been emphasizing older systems in this series. In line with that theme, “New Technologies in Heating” will talk about a little about Modulating/Condensing equipment as gas systems. There are some controls unique to gas, and those are what we’ll want to address. 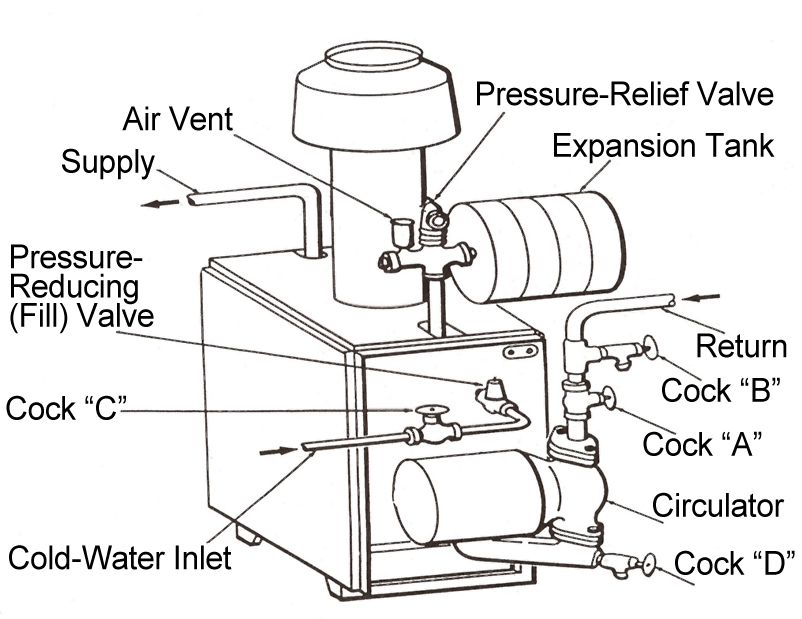 Above is an example of a typical gas package boiler of the 1950’s up to the present.
Before we get too involved, we need an explanation for the designations of control series. When the heating control industry began coming into its own many years ago, Honeywell was one of the early pioneers. They developed control systems to cover a broad spectrum including gravity warm air systems, steam systems and gravity hot water systems. It became necessary to identify controls for how they were wired and their particular switching action, such as SPST,SPDT, etc. These systems were given “series” numbers, such as series 10 or series 20 and so on. What follows is a brief description of several of the systems involved. A few have been obsolete for some time while others remain with us today. To identify which system you’re working with, you only need look at the first digit in the control number. For example, T105 is series 10, T-26 is series 20, etc. Series 20 controls are no longer available today. There are a few series 10 controls still being produced however, such as the RA 117 stack relay for oil or the R-182 relay. While the series 20 controls are no longer available, the power to open power to close concept continues to be used in some vent dampers, zone valves and modulating motors.
Here is a list of control functions that we want to achieve with Forced Hot Water systems:
• Safety
• Maintain Water Temperature
• Circlate Water
• Maintain Space Temperature
Safety is of course always first priority and should never be circumvented for the sake of comfort. We will be discussing the various controls that help us satisfy these basic control functions.
There are three basic rules of forced hot water systems that simplify our understanding of what can be accomplished. No matter how complex the system, these three rules will remain present consistently. The only exception involves rule three, which does not apply if we do not have a demand for domestic hot water. When the thermostat calls for heat, the burner and circulator turn on together.
This has been the case for many years. As of September 1, 2012, the three basic rules were altered based on a DOE (Department of Energy) rule. In simple terms it states: The boiler looks for 140ºF water temperature or a two minute time limit, whichever comes first, and then fires the burner. If the boiler water is 140ºF or higher then the circulator alone should be running. The boiler burners should only be on when the boiler water is below 140ºF.
• If the boiler goes off while on limit, the circulator will continue to run.
• The domestic Aquastat or Low Limit always has priority over heating.
2012 Residential Boiler Standards
On September 1, 2012, the residential boiler minimum federal efficiency standards went into effect. The standards (set by the Federal Independence & Security Act [EISA] in 2007 then fully implemented Sept. 1, 2012) required residential gas hot water boilers to meet a minimum AFUE of 82%; gas steam boilers, 80%; oil hot water boilers, 84%; and oil steam boilers, 82%.
Most of our new equipment today is classified either as a Category III or IV. A Category III is a system with a positive vent pressure, a stack temperature above 275°F, annual efficiency below 84%, and with the potential for condensing in the flue (usually a stainless steel flue is required). It can’t be vented into a chimney so is typically side-wall vented. It is usually called mid-efficiency equipment.
Category IV also involves a positive pressure in the vent with its stack temperature below 275°F, vented with Poly Pro special venting material. This author does not recommend the use of PVC or CPVC as a vent with equipment, but they can be used as an air intake pipe. By design, these will cause condensation in the heat exchanger. The approach is often called high efficiency equipment with an AFUE above 84%. 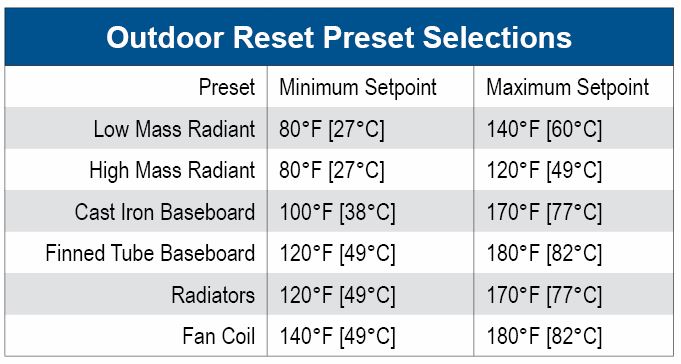 Modern forced hot water systems, coupled with 24 volt standing pilot systems, is a system which both modulates and acts as a condensing appliance. Modulation is typically accomplished by varying the combustion air blower speed, which then in conjunction with a negative pressure gas valve causes gas to be premixed with the air varying input to the equipment. Most systems on the residential side have a 5-to-1 turn down ratio. Put another way, a 100,000 BTU piece of equipment would fire from 20,000 on the low end up to 100,000 on the high end with increments in between 40,000, 60,000, and 80,000. Some new equipment now has a ten to one ratio available on residential systems.
Condensation is accomplished by keeping the stack temperature below 275°F and the return water temperature (in the case of boilers) maintained at 140°F or less. The system is designed to allow condensation to take place in the boiler heat exchanger. This, of course, was new allowable on cast iron and steel boilers since it would cause corrosion within the boiler sections.
The following points offer some subjects to consider when looking at installing a Mod/Con to replace your existing, dated boiler with either gas or oil. They are not presented in any particular order, all are important.
•What kind of radiation does the existing system have (baseboard, convectors, radiators)? Most of these are designed to operate above 180°F, so the installer needs to consider whether say in the case of baseboards they are designed to give 600 BTUs per lineal foot at 180°, for example. Will a temperature below 140° adequately heat the dwelling? More baseboards may need to be added in order to meet the room BTU heat loss.
•Can this type of system be used on an old gravity hot water system? With some piping changes it can be done and definitely requires outdoor reset and mixing controls.
•Water temperatures become important as some manufacturers have a high limit of approximately 165°F as a maximum temp on their boilers.
•Did heat loss occur? If so, do not trust the previous inputs on older equipment.
•Piping changes to primary secondary, of a low loss header.
•Water temperature mixing certainly in the case of domestic hot water applications.
•Complexity of control systems. It’s worthwhile to keep things as simple as you can.
•Make sure you know that annual maintenance is required on these systems. These are not your old gas boilers, which required very little maintenance. Let the customer know about annual requirements and their cost.
•What is the preferred type of boiler heat exchanger? Stainless steel, cast aluminum, cast iron, something else? All of these are available from different manufacturers for use on condensing equipment.
•How is domestic hot water going to be supplied? On demand, indirect, or storage?
•The history on the new equipment as to the performance, problems, etc. ICM 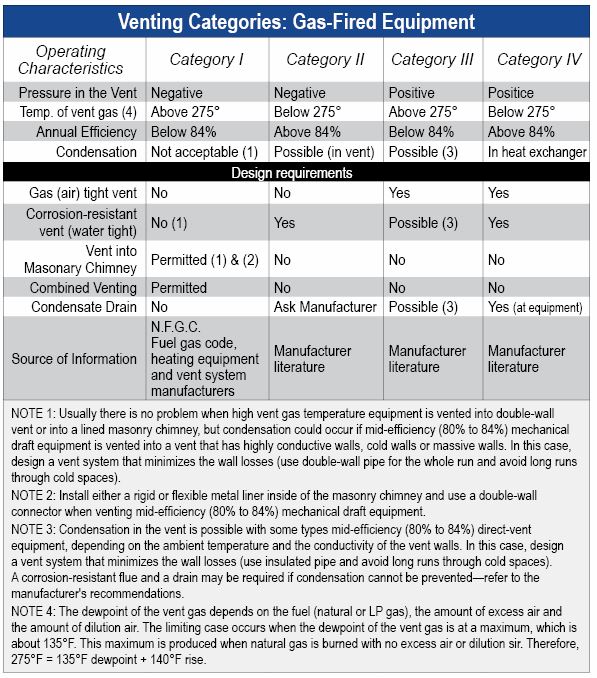