How Does a Heat Pump Pump Heat?

Mother Nature has a collection of “rules” that govern how things work in this world—“High pressure goes to low pressure,” “Whatever goes up must come down,” “For every action there is an equal and opposite reaction” and probably her most famous if you are in the heating industry, “Heat goes to cold!” If you were to ask someone where does heat go? he/she would say heat rises. That’s not necessarily correct, since hot air rises, but heat goes to cold, always. Mother Nature hates an imbalance and, when it exists, she does everything in her power to equalize or balance it.

When your heating system delivers warmth to your house, it eventually leaves through the windows, roof and siding. Why does the heat leave? There is an imbalance between the temperature inside the house and the temperature outside. Heat goes to cold…always! The same thing happens in the Summertime. When it is very hot outside and your house is cooler inside, the heat outside wants to go to the cooler indoor temperature.

How do we typically make the indoor cooler? Most people would say the air conditioner, which is true, but how eludes most people. We use an air conditioning system that removes heat from the indoors and sends it outside. That’s because you can’t make cold. To create a cooler atmosphere, you have to remove the heat, which is the basis of refrigeration. Whenever you feel cold, it is caused by a lack of heat.

If we know that heat wants to go to cold, why do we call it a heat pump? Why do we have to pump the heat when heat normally goes to cold? The reason is a heat pump, rather than creating heat, simply moves it. For example, it can move thermal energy from the cooler outdoor air into the warmer inside room. It pushes heat in a direction counter to its normal flow (cold to hot rather than hot to cold), hence the word pump. A boiler or furnace burns fossil fuel to create heat. A heat pump simply uses an existing source of renewable energy, like the heat that exists in outdoor air. This can lead to a significantly reduced consumption of energy while providing comfort.

Refrigeration
The definition of Refrigeration is the process in which work is done to move heat from one location to another. It may also be defined as lowering the temperature of an enclosed space by removing heat from that space and transferring it elsewhere. 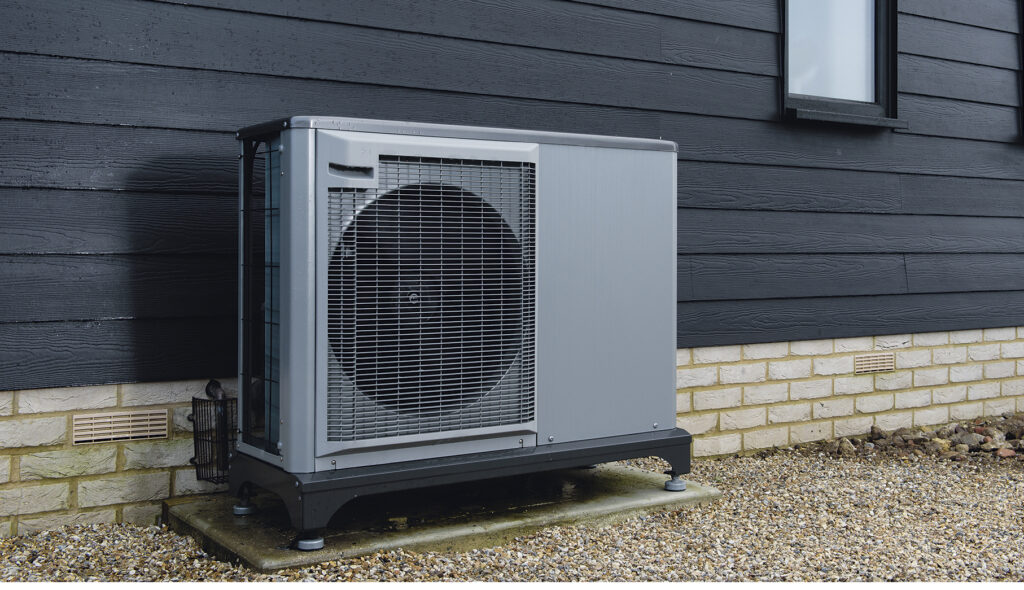 You have to remember that phase change contains a significant amount of energy. For example, when you change the temperature of one pound of water from 211°F to 212°F, it requires one British Thermal Unit (BTU). When you change one pound of 212°F water to 212°F vapor (steam), it takes 970 BTUs that you “get back” when the vapor condenses back to its liquid state.

A heat pump incorporates the vapor-compression refrigeration cycle to move heat either away from an area where it’s not wanted (cooling) or moves heat into a space that needs it (heating). Because of the unique operating properties of R410A, an Air-to-Water or Air-to-Air heat pump has the ability to take heat (energy) out of the air that we would consider very cold but to the refrigerant considers it warm. This applies to the heating mode of the heat pump.

The cooling operation is identical to that of an air conditioner. Again, using refrigerant and the vapor-compression cycle, the cold liquid refrigerant flows through the air conditioning coil as room air blows across it. The heat from the air goes to the cold liquid refrigerant, thus leaving the air cooler than it was when it entered the coil. The absorbed heat “flashed” the cold liquid refrigerant into cool vapor, which will then flow outside to the compressor. There, the cool vapor will be compressed (by the compressor) into a high temperature vapor. The vapor, which is storing a lot of energy (the heat we wanted to remove from the home), is pumped through a condensing coil where a fan is blowing outside air across it. This outdoor air is hot, relative to our comfort, but much cooler than the temperature of the hot vapor refrigerant. The hot vapor transfers its energy/heat to the outside air, thus completing the process of removing heat from the house and condensing it back into a warm liquid.

Reversing valve
Heat pumps have the unique ability to either heat or cool a home through a simple device called a reversing valve. There are four key components required:
• evaporator
• condensor
• compressor
• expansion valve

By adding the reversing valve, the heat pump can “reverse” the role of these key components and provide heating or cooling from the same compressor.

Another term unique to heat pumps is Coefficient of Performance (COP). This term expresses how efficient the heat pump is with regards to the amount of energy it uses relative to the amount of energy it delivers. The term was developed to compare heat pump systems according to their energy efficiency. A higher value implies a higher efficiency between the pump’s consumption of energy and its output. Design conditions will impact the heat pump’s COP performance factor. Air-to-Air and Air-to-Water heat pumps have in the past been negatively impacted in their performance by colder outdoor temperatures. However, with advances in compressor technology, specifically invertor-driven compressors, these Air-to-Air and Air-to-Water heat pumps are capable of extracting energy (heat) from very cold outdoor temperatures and transferring the energy to the heating medium (water or air).