Southern Florida’s tropical climate provides a number of design considerations, not the least of which is reducing humidity within the mechanical and conditioned living spaces—which is critical to ensure indoor air quality.

Even under normal operating conditions, preventing condensation and mold accumulation on ductwork and equipment located outside of the conditioned space can be a challenge. Making extraordinary demands of an ordinary cooling system can lead to a number of consequences from underperformance to mold growth. This was exactly the situation that Greg Borek found himself in after meeting homeowner Dr. Nils Nystrom. 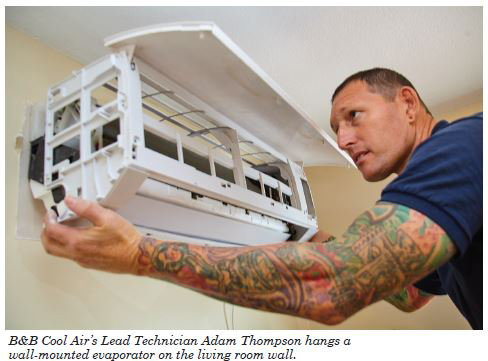 Borek is president of B&B Cool Air, based in Lehigh Acres, FL. He runs the 40-year-old cooling company with his brothers, Matthew and Frank Jr. They have 11 trucks on the road providing AC and commercial refrigeration service to the southwestern part of the state.

“When I met the Nystroms in mid-2019, they’d been without air conditioning for a few weeks while trying to find a contractor that could properly address their comfort issues,” said Borek. “Their previous 12-SEER unitary system had failed and they were running a portable cooler in the bedroom for the time being. The challenge was that they were adamant about maintaining indoor temperatures between 64°F and 73°F, and yet, they’re quite environmentally-conscious.”

The Nystroms are originally from Umea, Sweden, which is the latitudinal equivalent of Fairbanks, AK, roughly speaking. Both retired medical professionals, they’ve lived all over the world and throughout the U.S., generally selecting cooler climates when possible.

“Heat belongs in the sauna,” said Nystrom. “Growing up in Sweden, we’d sleep with the bedroom window open all winter long. We have a hard time sleeping if the bedroom is warmer than 18°C (64.4°F). Frankly, I don’t care for the climate in Florida, but it’s where our grandchildren live.

“Our search for a contractor spanned a few weeks,” he continued. “Nobody seemed willing to put forth the effort needed to create the indoor environment we wanted. We were finally referred to B&B Cool Air. Greg Borek is the consummate professional, and he did his due diligence after meeting us and seeing our home. He listened and presented options.”

Undersized and leaky
The 2,000 square-foot, 50-year-old home had been cooled by a three-ton, 12 SEER unitary system until the compressor failed. Not only was it undersized for the demand of keeping the house cooler than average, but the ductwork throughout the home was leaking. 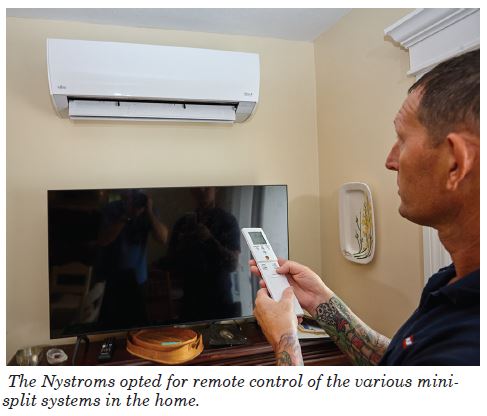 “At first, the Nystroms were adamant that they wanted a new unitary system,” said Borek. “We found that we could maintain temperature by installing a five-ton, inverter-driven unit and sealing or replacing the ductwork, but condensation on the ductwork and air handler was a real concern.”

The home sits right on the water, which adds to the challenge of Florida’s humid climate. All of the ductwork is run through a very small attic space. Borek suggested installing ductless heat pumps instead of a unitary system to avoid the condensation issue altogether, but the Nystroms wanted to further explore their unitary options.

“I explained that if there was to be a unitary system installed, we insisted on installing a dehumidification system in the attic in addition to sealing the ductwork,” said Borek. “What finally tipped the scales in favor of a ductless system was the ability for the Nystroms to conserve energy by cooling only the rooms they were using at any given time, instead of cooling the entire house. They liked the concept of letting unoccupied spaces idle at warmer temperatures for energy efficiency.” 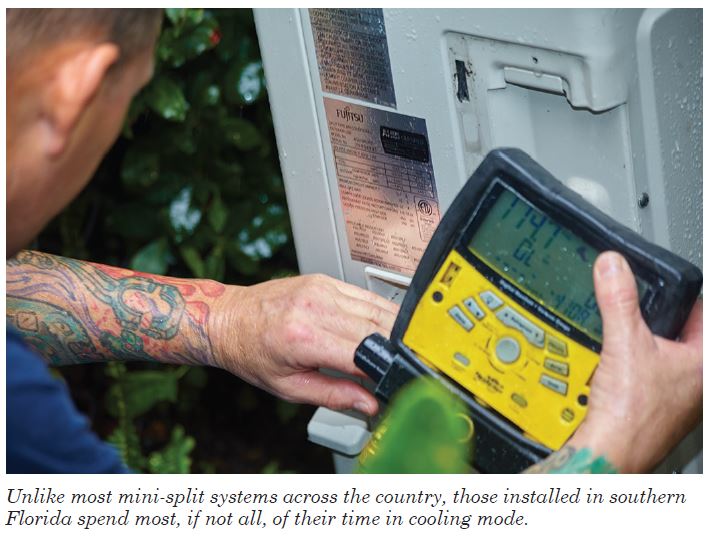 “To us, the environmental advantage of cooling only unoccupied spaces is a tremendous benefit,” said Nystrom. “It makes very little sense to cool the entire house at any given time.”

Ductless meets the need
B&B Cool Air has been a Fujitsu Elite dealer since early 2019. Their loyalty to Mark Rambo, at Ferguson Fort Myers, initiated the switch to Fujitsu. 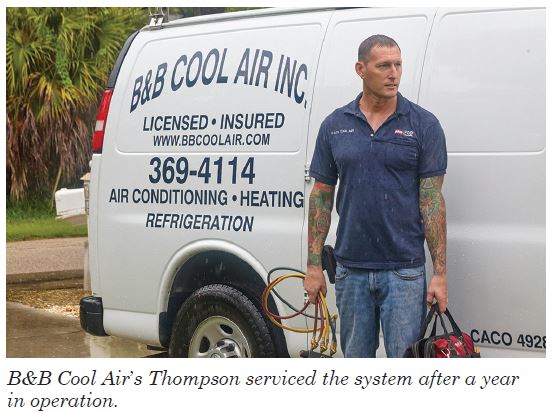 “Mark called on my Dad in the 1980s, and we’ve had an outstanding relationship since,” said Borek. “He actually has a contractor’s license, so he understands what he’s selling. When he made a transition to Ferguson last year, we switched to Fujitsu to stay with him, and it’s been a good move. Fujitsu multi-zone systems are easier to set up than the products we’ve used in the past, and the quality of product and the warranty are as good or better.”

Once the decision was made to use multi-zone ductless split systems, Borek zoned the home according to input from the Nystroms.

“We discussed where they spent most of their time and how cool they wanted each of the living spaces,” said Borek. “Ultimately, we installed two multi-zone systems, a two-zone and a four-zone; 18,000 and 36,000 BTUH, respectively.”

Work began in the master bedroom. Its wall-mount head, along with a smaller one in the guest bedroom, is connected to the smaller Halcyon condensing unit. After the bedroom systems were operational, several days passed before B&B could return to complete the rest of the installation. During that time, the bedrooms maintained setpoint while also keeping the rest of the home at a livable temperature.

The larger Halcyon model provides capacity to four wall-mounted evaporators ranging from 7,000 to 12,000 BTUH each, which cool the rest of the single-story home. These heads are in the dining room, living room, kitchen and study/office area. Installations We help more owners sell their business than anyone! Cetane Associates completes more transactions in the delivered fuels industry than any other M&A advisors. We bring more buyers to the table — an average of 5.8 offers per client. So you can choose the right deal for you, your employees, and your customers. Get to know us better at Cetane.net. Then call 860-592-0089 for a confidential conversation.

“Aesthetically, running linesets proved a bit tricky,” explained Borek. “The roof has an extremely low pitch, but we managed to get the lines into the attic area, insulate them well and drop down through the soffit to the condensing units. Once outside, the linesets and condensate lines are covered in aluminum line-hide.”

The dining room evaporator required the use of a condensate pump. Otherwise, all the indoor units were mounted on exterior walls, so the condensate can drain naturally. B&B Cool Air took a few extra steps to maintain consistent temperatures within the smallest areas of the home, where installing a mini-split head couldn’t be justified.

In the laundry, a small, low-speed fan draws warm air out of the room, discharging to the kitchen via a ceiling grille. As it does, conditioned air is pulled through the laundry doorway. This recirculation system can be controlled manually as needed.

Recalling Sweden
Over the first few months after the retrofit, the Nystroms contacted B&B Cooling multiple times to express their appreciation. The system was more comfortable and controllable than they’d expected.

“We’ve never been as comfortable in the home as we are now,” said Nystrom. “There’s no noise inside or outside. At worst, the sound level is a whisper. Greg’s honesty and experience were so apparent throughout the whole process, and we can’t say enough good things about his company.”

The Nystroms programmed the individual ductless heads to cool spaces according to their daily routine. The bedroom is cool while they sleep, the kitchen unit comes on when they wake up, and so on. They’ve found this to work very well, and can easily override the programming as they wish.

“When I was a child in Sweden, the town used to flood the soccer fields to create ice rinks over the winter,” said Nystrom. “In Phys Ed., we’d either skate or we’d find a hill and ski. Now, with climate change, it’s too warm for any of that. I contemplate these things when thinking of our changing world. One of the things I appreciate about the efficiency of our new Fujitsu system is that we can maintain a cool home with less impact on the environment than a conventional system.” ICM

Dan Vastyan is PR director and writer for Common Ground, based in Manheim, PA.