For about 10 years, there have been reports of seized fuel units with brown varnish type deposits on the gears and shaft of the fuel unit. Typically, the technician changes the bound fuel unit, and the situation reoccurs—unfortunately, often repeatedly. Fuel units do not normally bind unless contaminated by degraded fuel or other foreign substances. The underlying cause needs to be determined and rectified before changing the fuel unit, otherwise the new fuel unit will also fail, increasing service costs and diminishing customer satisfaction.

Water in the fuel tank is a primary source of these issues. Therefore, good tank housekeeping practices are critical. It is good practice to check for the presence of water in storage tanks at every maintenance visit and is mandatory when confronting a bound fuel unit. Check tanks for water and remove it, then determine the entry point. When it comes to water buildup in the system, areas to be aware of are:

• Missing fill or vent caps
• Rotted fill or vent piping
• Condensation, particularly with outside tanks
• Broken tank gauge vials with outside tanks
• Failing to drain water from new tanks at installation
• Pumping contaminated fuel from an old tank to a new tank
• Tanks must be pitched toward the bottom outlet by ¼” per foot.
• Outside tanks need a manufacturer-approved means to drain water from tank
• Do not use TeflonTM or other similar tape
• Check filter canisters for corrosion and replace them if necessary
• Replace spin-on filter cartridges that have been exposed to water 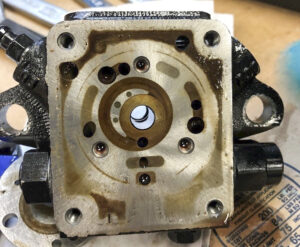 Degraded fuel that forms polymers should be approached differently. Biodiesel content is sometimes blamed. Sticky residues occur with no biodiesel content, as well as with biodiesel. There is also no correlation with the delivered fuel itself. Sites that received deliveries on the same day and from the same truck do not show these issues, therefore the issue is site and tank specific. The common factors in most problem sites are two-pipe systems, outside tanks and high particulates in the fuel.

Converting from two-pipe to single pipe, or installing a fuel deaerator (Figure 3), reduces the contact time between fuel and copper. This extends the shelf life of the fuel as well as reducing the fuel flow through the filter extending its life. Using a quality spin-on type filter or, even better, two in a series (Figure 4), provides superior filtration as well as greater depth and capacity to address the particulate issue. In some exploratory work, we have successfully used ultrafine diesel filters (2 micron) for the second filter in the series. 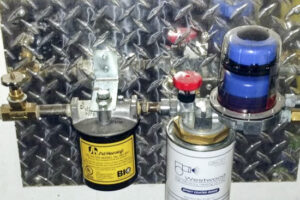 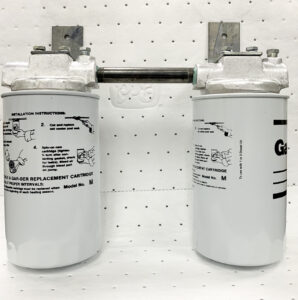 When confronted with a bound fuel unit, keep in mind it is not normal and it is crucial to identify the underlying cause and address it rather than just replacing the fuel unit. The odds are the new one will bind repeatedly if you do not.

Anecdotally, I have heard of as many as 13 pumps being replaced on a single site before the root cause was resolved.

It is a lot easier on everyone and more cost-effective to solve the problem on the first or second call rather than on the fourteenth. ICM