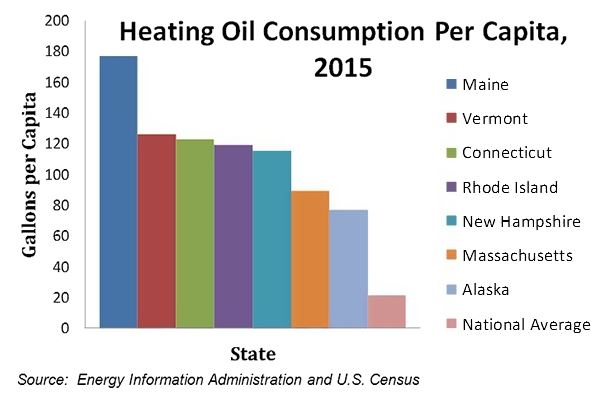 Mainebiz.com Staff–Despite 10 years of concerted efforts to tighten Maine homes and shift to other forms of heating, Maine still remains the state most dependent on heating oil, the Governor’s Energy Office reported.
The Governor’s Energy Office took the occasion of reporting its weekly heating fuel price survey to highlight the work that remains to reduce the state’s dependency on heating oil. It reported the current statewide average cash price for No. 2 heating oil was $2.26 per gallon, down four cents from a few weeks ago.
The average statewide kerosene price, now at $2.79 a gallon, followed the same trend, also down four cents.
The average statewide propane price, peaking at $2.60 in late February, has since decreased five cents a gallon, and this week is now $2.55 per gallon. Within the Energy Office sample, the highest heating oil price was $2.65 per gallon and the lowest heating oil price found was $1.96 per gallon. The statewide average price for propane is based on consumption of at least 900 gallons a year. The energy office noted that households using propane just for cooking or hot water generally pay a higher per gallon price.
The energy office reported that measures taken over the past 10 years to reduce Maine residents’ heating oil consumption have reduced the number of households relying on heating oil as their primary fuel source from a high of 75.6% in 2009 to 64.9% in 2015.
Steps taken include: energy efficiency measures such as insulation and air sealing; replacing old, inefficient heating systems with more efficient ones; switching the primary fuel source from oil to another fuel, such as wood and wood pellet systems, propane, natural gas and cold-climate heat pumps.
Even so, the office reported, Maine is still the most heating oil dependent state for home heating in the country — which means Mainers remain more vulnerable to volatile oil prices than other states, as we depend on heating oil for both heating and transportation.
Both the Governor’s Energy Office and Efficiency Maine have calculators on their web sites that allow consumers to explore fuel options further and compare the efficiency of heating systems that most closely match their own system in order to evaluate heating alternatives.
Article courtesy of Mainebiz.com