Goettl Air Conditioning announced the acquisition of family-owned HVAC company Walton’s Heating and Air, based out of southern California.

The financial details of 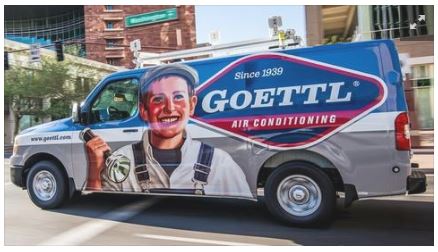 the deal were not disclosed.

The deal allows Goettl, with locations already in Phoenix, Tucson, and Las Vegas, to begin solidifying a presence in California and for Walton’s to grow beyond what owner Todd Longbrake could do on his own.

“I had taken the family-owned business about as far as we could take it, we were stagnant,” said Longbrake.

When Goettl showed interest in acquiring Walton’s in early 2015, Longbrake was reluctant to jump onboard. However, after hearing promising comments from other individuals in the HVAC industry about Goettl and owner Ken Goodrich, Longbrake decided to give it a chance.

The acquisition was finalized in mid 2015 and Longbrake says, “since we joined forces we have grown ten-fold.”

Longbrake is being retained in Goettl taking on the roles of sales manager and field supervisor.

“Todd has assimilated into our company culture almost immediately and became a leader within our entire organization,” said Goodrich.

Although the deal was finalized two years ago, Goodrich held off on announcing the acquisition until earlier this week, due to operational issues within Walton’s and marketing complications.

“We wanted to get all those things in place before giving it the Goettl badge,” said Goodrich.

He managed the various obstacles throughout the acquisition because of the value he believed Walton’s offered to Goettl.

“Walton’s had a similar family background and values,” said Goodrich. He added that although Walton’s was stagnant at the time, he recognized that the company was a, “platform company where we could grow.”

Goettl currently has 306 employees and as a result of the acquisition, the company projects the addition of 200 jobs, particularly in Tucson and Phoenix, the company’s largest markets.

“Our long-range goal is to make Goettl a nationwide brand,” said Goodrich. He added that the company plans to expand into northern California next followed by Texas in 2018.