In this two-part series, we are going to discuss propane tank locations as outlined in the Federal guidelines of NFPA 58. For the purpose of this article, we will break this into two categories. The first will be about propane tanks with a capacity of 120 gallons or fewer, which is the largest size allowed up against a house or building. The second will concern 250 gallons tanks and larger that have different codes and requirements that need to be followed.

It shall be also noted that although the NFPA 58 is the national guideline for tank locations, all local codes must be adhered to as well. The general rule of thumb is to follow the code that is more strict, whether that be the NFPA codes or local codes.

To begin, we need to identify two different types of cylinders. All 20lb, 30lb, 40lb, fork-lift tanks, many of the 100lb and even the older 200lb and 120 gallon tanks are considered Department of Transportation (DOT) cylinders because they can be transported on the road and the DOT is the governing body for these tanks. DOT tanks need to be recertified (also known as requalification) 12 years from the date of manufacture and periodically thereafter by a trained recertification professional. There are different re-certification methods that determine how long until the tanks need to be re-certified again. This will be covered in a future article.

American Society of Mechanical Engineers (ASME) tanks do not require recertification after installation. They are good in the field for their lifetime. ASME tanks would only be taken out of service if an issue arose.

Tank locations
20lb, 30lb and 40lb tanks are the typical tanks found on a grill or camper and typically not used on a house due to their small capacity. Liquid propane weighs 4.2 lbs/gallons, a 20lb full tank holds approximately 4.76 gallons. Some of the larger tanks found alongside a house are 100lb, 200lb, 300lb. 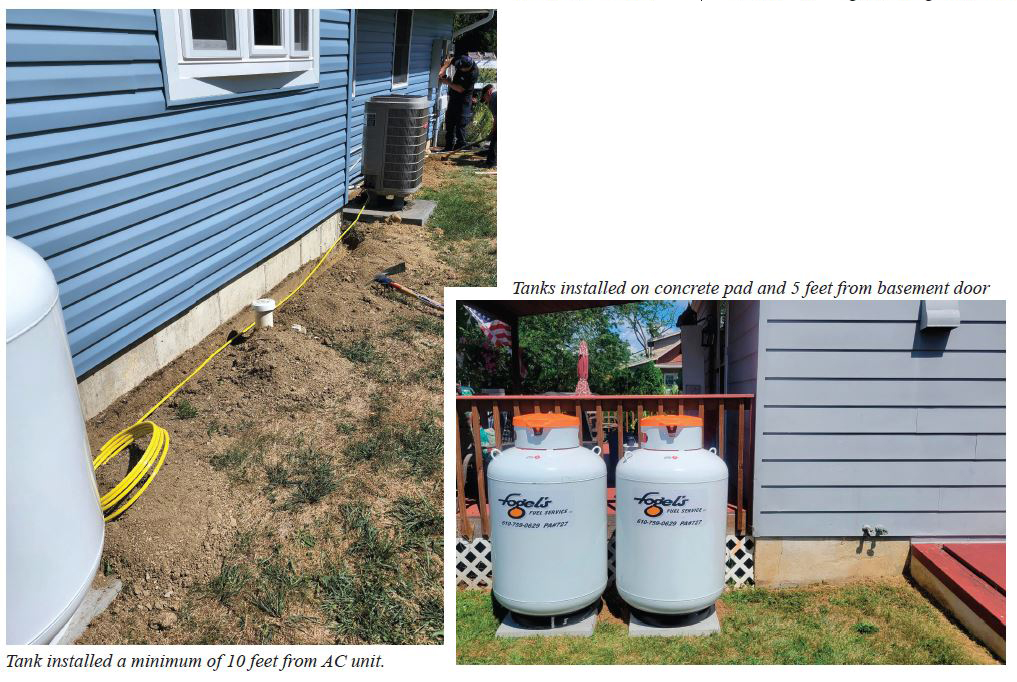 Both DOT and ASME tanks that are filled on-site need to be a minimum of 10 feet from any external/direct source of ignition. This includes air conditioning units, generators, window air conditioners and even direct vents from heating system or fireplaces. Using a measuring tape in a horizontal line to measure the space between the liquid withdrawal or fill valve (whichever is closer) to the source of the ignition—this must be a minimum of 10 feet. The only exception is if the tank is not to be filled on-site; it can then be five feet away. Most tanks are filled on-site with a bobtail truck. However, if the customer has a smaller tank and unhooks the tank to get it filled somewhere else, it can then be 5 feet from the ignition source.

A DOT tank must be 3 feet from a door or a window (measuring horizontally) if the door/window is below the liquid relief/fill valve. This is because propane is heavier than air, and while filling the tank or if there is a leak, propane will always sink and could possibly seep into the building.

For ASME tanks, the same rules apply, except the minimum distance is five feet. It is best to avoid placing tanks directly under powerlines going to the house. Tanks should always be set on either a concrete pad or concrete blocks for two reasons—stability and air flow, which helps the tank dry, reducing the possibility of rust. A tank must not be set on any type of wood, which could rot or break and risk the tank falling over.

Tanks should never be placed in an enclosed space. An enclosed area like a shed can get extremely hot and does not have ventilation. If the relief valve opens due to increased internal pressure or fails, or if the tank develops a leak, the propane gas will get trapped in a tight environment with nowhere to escape causing an explosion and fire hazard. Also, do not place a tank within 10 feet of stored or accumulated combustible material.

ASME 120 and DOT 420 (fewer than 125 gallons) tanks may be installed under a deck providing there is a minimum of a 50% open perimeter, however adding lattice or similar structures may have different requirements Always refer to and follow NFPA 58 codes as well as local codes prior to tank installations.

Part 2 will look at tanks 250 gallons and greater. ICM