Timmie McElwain
As we continue in our familiarization with Propane and Natural Gas, we must realize that with both fuels, the characteristics of the flame are important to safe and efficient operation of all appliances using the product. As oil companies transition into the gas market, new appliances will now have to be considered. With oil, it was pretty much heating and hot water; But with gas, we have many more appliances involved, all of which will burn the fuel. This includes everything from gas ranges, dryers, space heaters, unvented heaters, fireplace inserts, pool heaters and outdoor grills—in fact, there are unlimited uses for these fuels. There are also new safety considerations, such as gas leaks and how to handle those (we will be discussing these in later articles). With propane, another concern is out of gas calls and the required pressure tests and leak tests that must be performed when dealing with those calls (these will also be covered in later articles).
The two fuels, because they are already gases, are ready for burning with reduced residuals and usually no sooting. All other fuels require some change of characteristic before they will burn, including coal, wood and even oil; all must turn to a form of gas before they will burn. In the case of oil, this is accomplished with pressure to atomize the oil through the nozzle. That combustion gives off visible light, detectable by the CAD cell for safe operation. But with propane and natural gas, there is very little visible light, therefore a CAD cell would not be able to detect the gas flame. However, the gas flames do give off infrared and ultraviolet, and in particular on commercial and industrial applications, we do have ultraviolet flame detection systems, allowing burners to operate safely. These devices are too costly to be used on gas residential systems. With that in mind we have to have other safety devices for flame detection and safe operation. We will be addressing those in future articles.
The concern with both propane and natural gas is to accomplish burning with little to no carbon monoxide (CO). The ANSI (American National Standards Institute) standards for heating and water heating is 0.04% (400 Parts per Million in a flue sample). For gas ovens, it is 0.08% (800 PPM). These are really too high—we strive for under 100 PPM on heating and hot water systems. On gas ovens, we would like to be at 25 PPM or below—the lower the better. As for CO levels in the living environment, EPA states 9 PPM for residential living spaces. OSHA and NIOSH for work environments specify 35 to 50 PPM on a time weighted average of 8 hours.
Let’s cover some of these characteristics and how we accomplish them.
FLAME CHARCTERISTICS
The proper gas flame is a soft blue flame, which is stable, not lifting or floating around.
The three distinct cones as shown in

Figure 1 should be visible. There should be no yellow in the flame as that is a characteristic of carbon.
The outer cone of the flame (the hottest part of the flame) should not be touching any surfaces. When the outer cone “impinges” on cooler surfaces, such as boiler sections or furnace heat exchangers, carbon deposits are formed and carbon monoxide is present.
The outer mantle may touch surfaces, as it is simply the products of combustion.
When looking at the main burner flame as in Figure 2, the same distinct cones should be visible. There may be times when “orange flecks” appear in the flame. This is caused by stirring up dust when in the vicinity of the burner or disturbing the burner and loosening a little rust or dust. This is of no concern as it will burn off. The only concern is for luminous yellow flames.
If, for some reason, the hotter part of the gas flame (outer cone) should touch a cooler surface, this is called “impingement”. In Figure 3, this is illustrated. This shows that carbon deposits would accumulate on the surface of heat exchanger or boiler surfaces.

There would also be another class of compounds called “Aldehydes” formed due to incomplete combustion. While carbon monoxide is odorless, aldehydes have a sharp, penetrating odor. The odor of aldehydes differs from odorants added to the gas for detection and the two should not be confused. The absence of aldehydes does not assure that carbon monoxide is not present in the flue products. However, if the odor of aldehydes is present, then carbon monoxide will almost always be present. Aldehydes, much like carbon monoxide, are toxic.
Combustion
It is important to understand the basics of combustion. In all aspects of operation, proper and safe combustion is of primary importance. There are many factors which can affect good combustion. It is important to understand that beyond what we will discuss here, there are very complex issues relative to combustion which need to be considered.

The Meaning of Combustion
All matter is made up of basic substances called elements. One of the most common elements on earth is oxygen. About 20 percent of our air is oxygen. Many materials react with oxygen, a process called oxidation. Rusting of metals is a common, everyday form of this process. Heat must be added to some oxidation reactions for them to take place and continue. Heat is given off in others. When oxygen acts with a substance to produce large amounts of heat rapidly (and usually light) the process is called combustion or burning.
With enough air present, fuel gases will burn in their normal state. Solid or liquid fuels, on the other hand, must be changed to a gas first before they will burn. Usually heat is required to change liquids or solids into gases
Requirements for Combustion
Three things needed for combustion to take place are shown as a combustion triangle in Figure 4: fuel, oxygen (air) and heat (temperature) all must be present. Otherwise, burning will not start or will not sustain itself after it starts. Take away any one of the three and burning will stop. This fact can be shown by considering ways to put out a wood fire. If all of the unburned wood (fuel) is dragged a way from the fire, the fire will soon go out. A heavy blanket may be thrown over the fire. The fresh supply of air (oxygen) is cut off, smothering the fire. Foam type fire extinguishers work in the same way, cutting off the air supply to a fire. Water thrown on the fire chills the wood. Reducing the temperature below the kindling point causes the fire to go out. Of course, heat is needed to start the fire in the first place. The same holds true for a gas “fire”. Some source of heat is required that will raise the temperature of the gas to its ignition temperature, which is (1,100° to 1,200° F).
In burning gas, all three elements of fuel, air and heat must be present. Gas alone will not burn. Air which supplies oxygen is needed as well. An open flame (pilot), spark ignition or even a hot surface igniter may be used to ignite the gas in gas appliances. Then the gas flame itself provides the heat need for sustained combustion.
Basic Chemistry of Combustion
Combustion of gas is a chemical reaction between fuel gas and oxygen. Figure 5 illustrates the case of the combustion of methane. The basic elements of common fuel gases are hydrogen (H) and carbon (C). When hydrogen burns, water vapor is produced. The water molecule, represented by the symbol H2O, consists of two hydrogen atoms and one oxygen atom. Complete burning of carbon in fuel gases forms carbon dioxide. Its symbol is CO2 and it has one atom of carbon and two atoms of oxygen in each molecule. 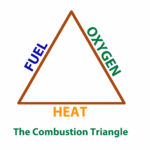 A fuel gas (methane, for example) and oxygen react with each other in burning, so are called reactants. Water vapor and carbon dioxide formed by that burning are called products of combustion.
In Figure 5, the reactants are methane (CH4) and oxygen. Two molecules of oxygen are required for each molecule of methane. The products are carbon dioxide and water vapor. Burning one molecule of methane produces one molecule of carbon dioxide and two molecules of water vapor. The total number of each type of atom in the reactants must equal the total number of the same type of atom in the products.
Figure 5 also shows complete burning of methane with exactly the amount of oxygen required. This basic model of the burning process should be understood for three reasons:
First, it shows that only harmless carbon dioxide and water vapor result if a fuel gas is completely burned.
Second, it shows exactly the amount of oxygen needed to completely burn a given fuel gas.
Third, it shows that definite amounts of products are formed in completely burning a certain quantity of a fuel gas.
The model shown in Figure 5 is expressed in terms of molecules. This figure also can be expressed in terms of cubic feet of the gases involved, substituting cubic feet for molecules. Two cubic feet of oxygen are needed to completely burn one cubic foot of methane. This process will form one cubic foot of carbon dioxide and two cubic feet of water vapor. Normally, of course, air containing oxygen rather than pure oxygen is used to burn a fuel gas.
Complete Combustion
Figure 5 shows an ideal model of complete burning of methane with oxygen. In gas appliances, air, rather than pure oxygen, is used to burn the gas. Air contains about 20 percent oxygen and 80 percent nitrogen.