Faulty Heating Systems Due to Lack of Knowledge

During the past few months, we have been presenting quite a few seminars on various heating subjects. One of the subjects was Troubleshooting Steam Systems, which concentrates on understanding and troubleshooting the different types of steam heating systems. Of all the systems we discuss, one-pipe systems are perceived as being the easiest to understand. The reasoning is very logical: there is only one pipe feeding each radiator, what’s so difficult to understand? However, as we got into the “hidden” aspects of one-pipe systems, the contractors started realizing these systems have certain rules that need to be followed if the system is going to be successful. A typical one-pipe steam system chugs along for years unnoticeably, until finally the boiler needs to be replaced or the new homeowner decides to remodel a kitchen or bedroom and needs to move or relocate some radiation. If it is done correctly, the system will continue to provide warmth to the house but as soon as one of the “rules” is ignored, anything can happen.
This is what was happening with a newly renovated house with an old steam system. They were experiencing cold radiators and spitting vents and a friend of mine asked me to take a look. One of the first things I check when troubleshooting a steam system that has a brand new boiler is to make sure the boiler was sized for the connected load. This means counting the square foot equivalence of direct radiation (EDR) rating of all the radiators in the house to see if it matches the boiler’s rating plate. This is important for two reasons:
1. If the boiler rating is less than the connected load, it won’t be able to heat all of the radiators in the house because it is undersized.
2. If the boiler rating is greater than the connected load, the system will experience velocity and counter-flow problems. This can lead to spitting radiator vents, sloshing, gurgling and banging pipes and radiators, boiler short-cycling and uneven heating.
It turns out the boiler was considerably oversized, which created a lot of problems. Making matters worse, during the kitchen remodel, they moved a couple of radiators to the other side of the room. This seemed innocent enough. Unfortunately, there exists another rule governing the size, the pitch and the length of pipe run used to feed each radiator and this is critical, especially in one-pipe systems. The reason is basic; the pipe that is used to deliver steam out to the radiator also brings the condensate formed in the radiator back to the main. This occurs simultaneously so it is important the velocity of the steam (how fast it is traveling towards the radiator) doesn’t exceed a maximum. If it does, the condensate won’t drain back and in fact will be driven towards the radiator, causing banging and sloshing noises. Think of it this way—steam traveling in a pipe is like wind heading in one direction, while the condensate is trying to gravity drain back underneath this wind in the opposite direction. So long as the tunnel is big enough and there is sufficient pitch, things will work as they should. 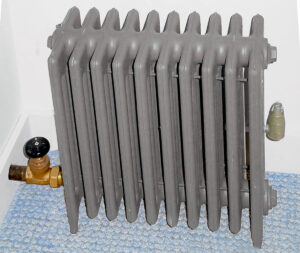 When our contractor friends remodeled the kitchen, they were not aware of these piping concerns. They used the same size pipe that had worked for the last 60 years, but with the oversized boiler and the additional length of horizontal run from the main to the radiators, they had nothing but cold, noisy cast iron decorations.
Another time, a contractor asked me to visit an apartment building that was giving the property management company a lot of headaches with nuisance service calls. What we saw when we walked into the boiler room was quite remarkable. The first thing that got my attention was the six old pressure reducing valves (PRVs) sitting on top of the boiler. The next item of interest was the expansion tank or lack thereof; there was a ¾” copper line piped off the top of the boiler and it went straight up into the sheet rocked ceiling.
However, we couldn’t see any expansion tank, only a piece of pipe! The final piece was the piping of the relief valve. Connected to the bottom of the discharge line from the valve was a piece of 6″ flue pipe that was positioned by a milk crate wedged against the boiler. From there, more flue pipe was attached. The janitor had built a drainage system using the flue pipe that ran from the bottom of the relief valve piping in the boiler room to a back room where a floor drain was located.
The relief valve would constantly dump water onto the floor every time the boiler fired. He was tired of mopping up the water and built the “drainage system” that emptied into a floor drain. When the boiler turned off, the pressure in the system would drop. This caused the PRV to feed gallons of make-up water back into the system. Unfortunately after a few of these cycles, the minerals from the raw make-up water came out of solution and gathered on the PRV’s seat, causing it to become plugged and then fail. Next came numerous phone calls to the management company from the upper floor tenants complaining of being too cold. Of course, where there is no water, there is no heat! To solve this problem, the janitor would then replace the “old” pressure-reducing valve with a brand new one. This continued throughout the entire heating season.
The cause of this whole miserable story was the hidden, waterlogged steel expansion tank that was concealed above the sheet rock. It appears the tank had been installed incorrectly ever since the boiler was replaced. The janitor had access to the tank and he would just drain it down every time it became waterlogged. Once the new ceiling went up and covered the tank, the problems multiplied. Instead of solving the real issue of why the tank was waterlogging in the first place, the janitor just did what he could, which was to build a “drainage system.”
Both of these problems shouldn’t have happened. The information is readily available; just take the time to ask! ICM
If you have any questions or comments, e-mail [email protected], call me at (800) 423-7187 or follow me on Twitter at @Ask_Gcarey.