By Daniel Fitzsimmons, The Daily Gazette, Schenectady, NY
FONDA, NY — Tom Mancini Sr. knew moments after a fire broke out in his auto repair shop that the building would be lost, and that he and his son, Tom Jr., must turn their attention to saving the fleet of vehicles that support the shop and their family’s heating oil business.
“It was seconds,” Mancini Sr. said. “I screamed, ‘Call 911,’ grabbed a fire extinguisher, and that didn’t even help.”
The fire started just after 3 p.m. Tuesday inside Mancini Motors, 5 Midway Alley. The business was attached to the family’s home and was adjacent to the heating oil business, Mancini Oil Inc. There were no injuries.
When the fire broke out, Mancini Jr. was working in a recently completed structure that housed additional oil storage tanks, some 20 yards away from the main building that was lost in the blaze. 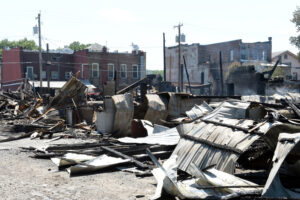 “I ran in and I grabbed a fire extinguisher, but it was just so hot we couldn’t get near it,” he said. “I just couldn’t believe how fast it all happened; it went up so quick.”
He told The Daily Gazette he remembers thinking he didn’t know what to do, until his mind seized upon the various support vehicles scattered inside and around the blazing buildings. He made sure his grandparents were out of the nearby house before turning his attention to the fleet.
“We were going to try to take the one truck and hook it to the car that was on fire, but we just couldn’t get to it; it happened too fast,” Mancini Jr. said. “By the time I grabbed the fire extinguisher … I could just feel [the fire] hitting right on my forehead. I just said, ‘We’ve got to grab stuff. Let’s go.’”
The Mancinis, together with those who were at the site at the time of the blaze, managed to save at least one pickup truck, four oil-delivery trucks and a tow truck. Lost to the fire were a flatbed truck and at least two other vehicles.
“We tried to save [the flatbed],” Mancini Jr. said. “The wires to open the door melted, and we couldn’t find the keys, and my dad was struggling to try and get it out.”
Stan Mitchell, the town of Mohawk fire chief, told a reporter at the fire scene Tuesday that “the heat got to a point where anything that was combustible would catch on fire.”
Firefighters from at least a dozen departments throughout Montgomery and Fulton counties were able to keep the flames away from a 15,000-gallon oil tank, which at the time contained around 8,000 gallons of heating oil. Mancini Jr. said the flames got so close to the tank, however, that it was ruined and is unusable.
He said his grandfather started the oil business in 1979, and his dad established the mechanic shop sometime in the mid- to late-1980s, soon after Mancini Jr. was born. The Mancinis plan to rebuild and modernize both businesses, and Mancini Jr. added that the oil business should bounce back quickly, due to the increased tank capacity that was recently added.
Everything else, he said, will likely take more time. An insurance adjuster is flying in from Minnesota to assess the damage Thursday.
The community was quick to rally while the blaze was occurring and in the aftermath. A nearby Stewart’s Shop brought bottled water to emergency crews, and a local pizza parlor donated pies.
“People were coming from everywhere,” Mancini Jr. said. “Everybody was coming and bringing stuff, and there was a lot of people here to help. Everybody reached out, so it was good.”
Smoke could still be seen drifting from a garage bay door at the fire scene Wednesday, the garage itself having been reduced to a charred frame. Several damaged vehicles sat around the perimeter of the buildings.
A maroon Hyundai Sonata sat in Midway Alley, in front of the garage, it’s rear window and sunroof blown out. What looked like a metal filing cabinet drawer, heavily charred and mangled, rested on the vehicle’s trunk next to an empty water bottle.
Clara Packard, who lives in an apartment building just west of the fire-ravaged buildings, said she and other tenants had to evacuate for at least two hours Tuesday until the blaze was brought under control. She added that she used to get heating oil delivered by Mancini Oil Inc., when she lived elsewhere in Fonda, and she has known the family for more than 20 years.
“They’re very nice people; they really are. They’ve been in this community for 40 years or more,” she said. “You couldn’t ask for nicer people.”
Packard added that she imagines the community, beyond the support provided during the blaze, will continue to rally around the family.
“This town is a good town, so I’m sure there will be some benefits for them,” Packard said.
Mancini Sr., sitting in a pickup truck at the site Wednesday, marveled at how fast the blaze consumed everything in its path.
“It was a pile of rubble quick,” he said. “I mean, you just don’t know what to do.”
He was fully aware, however, that he and his family have much to do in the coming weeks and months to rebuild.
“We’re just waiting for the adjuster to come … we’ve got to get all new titles for the trucks. We’ve got to make keys, on and on and on,” Mancini Sr. said. “I don’t know if I’m in shock; I don’t think I am. But yea, just ready to get going.”
Article courtesy: The Daily Gazette, Schenectady, NY