Each week, when I head into the depot for my weekly truck stock replenishment, the sight of the multi-colored steel balloon bouquet rising over the sides of the very large scrap steel dumpster aggravates me. There is much lost revenue for the service department in there!
In addition to thinking about all the bling I could purchase with that money for my Road King, Jeep and dirt bikes, I also think about how much extra education the service budget could afford if that bouquet of tank growth could be slowed. It seems that the service life of these tanks, both hydronic and potable, is much shorter than it used to be.
I had been thinking there has to be a way to extend the service life of these tanks. Perhaps just being able to perform a simple check of a tank’s condition while on a service visit as a proactive measure could lessen the possibility of a reactive damage claim with the additional water parts (feed valve, relief valve, auto vents) and potential liability drama it brings. 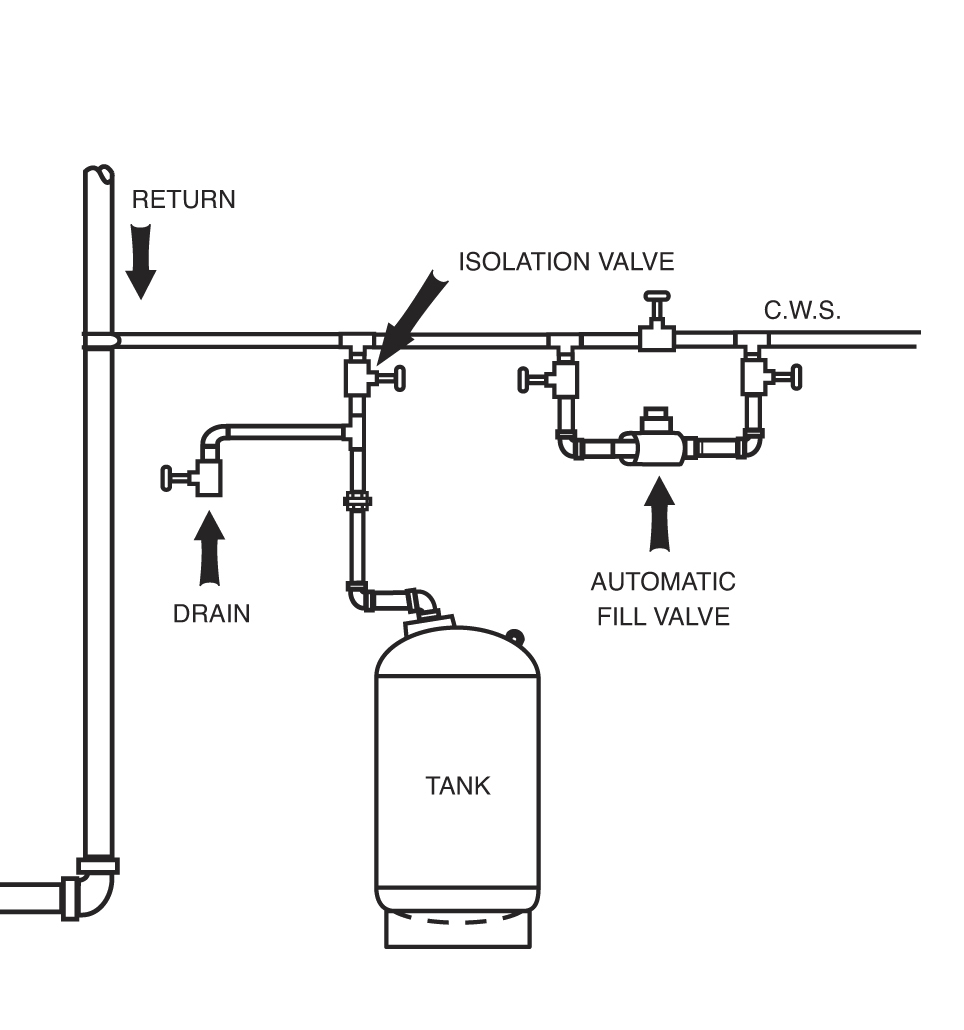 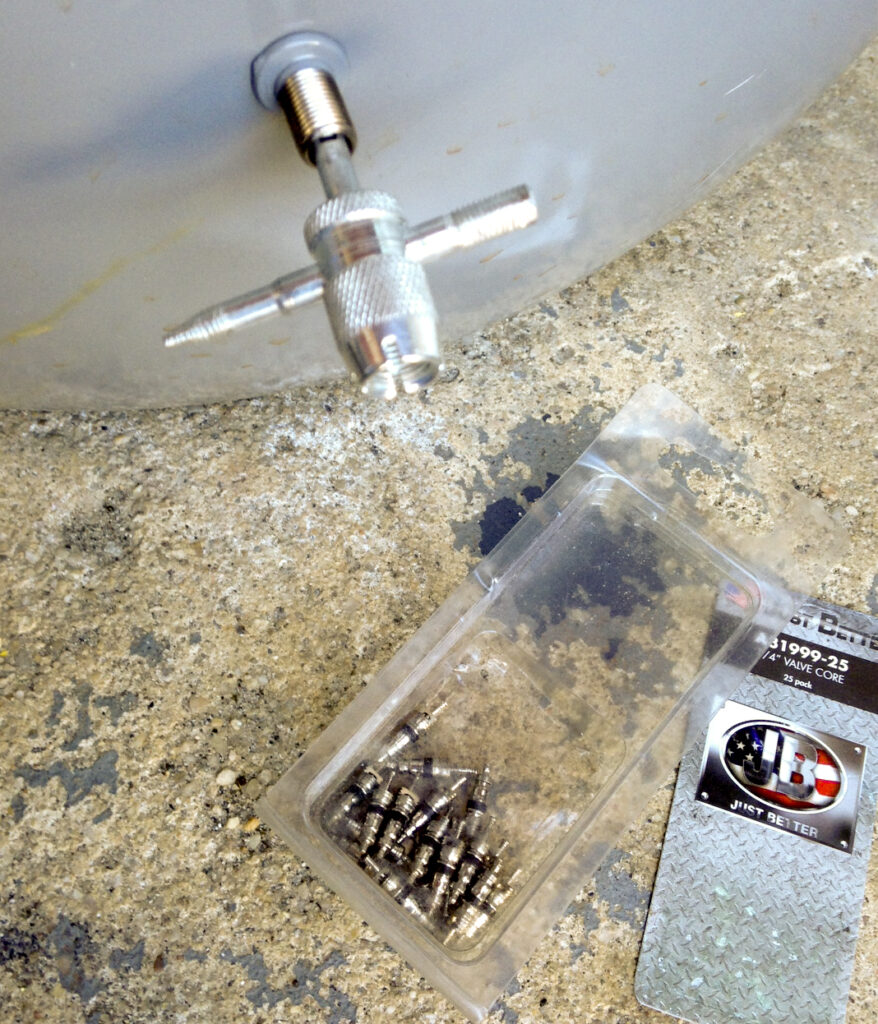 One of the guys I work with had become so upset in seeing this bouquet grow larger, he actually called one of the tank manufacturers and accused them of shipping the tanks with no air charge! It appears that the pressure gauge his great grandfather had passed to his grandfather, then passed to his father, and now on to him, had somehow stopped working, causing him to think that all three tanks on his truck—new in the box—were not pressurized!
I would have checked the gauge on one of my service truck tires (this story stays in my comedy routine)!
A few years back, I took notice of how commercial diaphragm expansion tanks are piped. (Insert Figure #1 here) The simple addition of an isolation valve and drain can be added to every residential tank installation and replacement. I remembered how easy this check can be when I was called to inspect a water leak at one of the apartment complexes we have a service contract with. This boiler had been shut down to repair a slab leak and the system refilled, purged and restarted. With the apartment complex’s maintenance man standing next to the 50 psi, 1-1/4″, 1,000,000 btu relief valve, it suddenly discharged! The relief valve was properly installed and piped with a drain pipe pointed towards the floor. Fortunately there were no injuries, he just had his reflexes tested!
This diaphragm expansion tank was a standing floor model. It was piped with an isolation ball valve and had a drain. I closed the isolation valve, drained off the pressure in the tank, checked the pressure and found it only had 5psi charge pressure. I replaced the valve core and pressurized the tank to match the system’s fill pressure, which was set to 20 psi.
I recently visited that apartment building, checked the tank pressure and found it had again dropped 2psi in a year. With the addition of an isolation valve and a drain, this check can be done during routine maintenance, without dropping the entire system pressure, and the tank can be easily recharged.  When I replaced the #15 diaphragm expansion tank on my boiler in October 2012, I added a ½” IPS ball valve, ½” close nipple, ½” tee and a ½” boiler drain upstream of the tank. On my system, I’ve found the tank has lost about 1psi a year. Each year during routine maintenance, the isolation valve gets closed, a hose is connected to the boiler drain installed at the diaphragm expansion tank and the pressure is relieved. 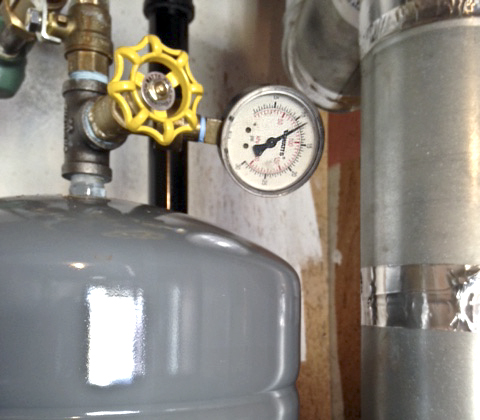 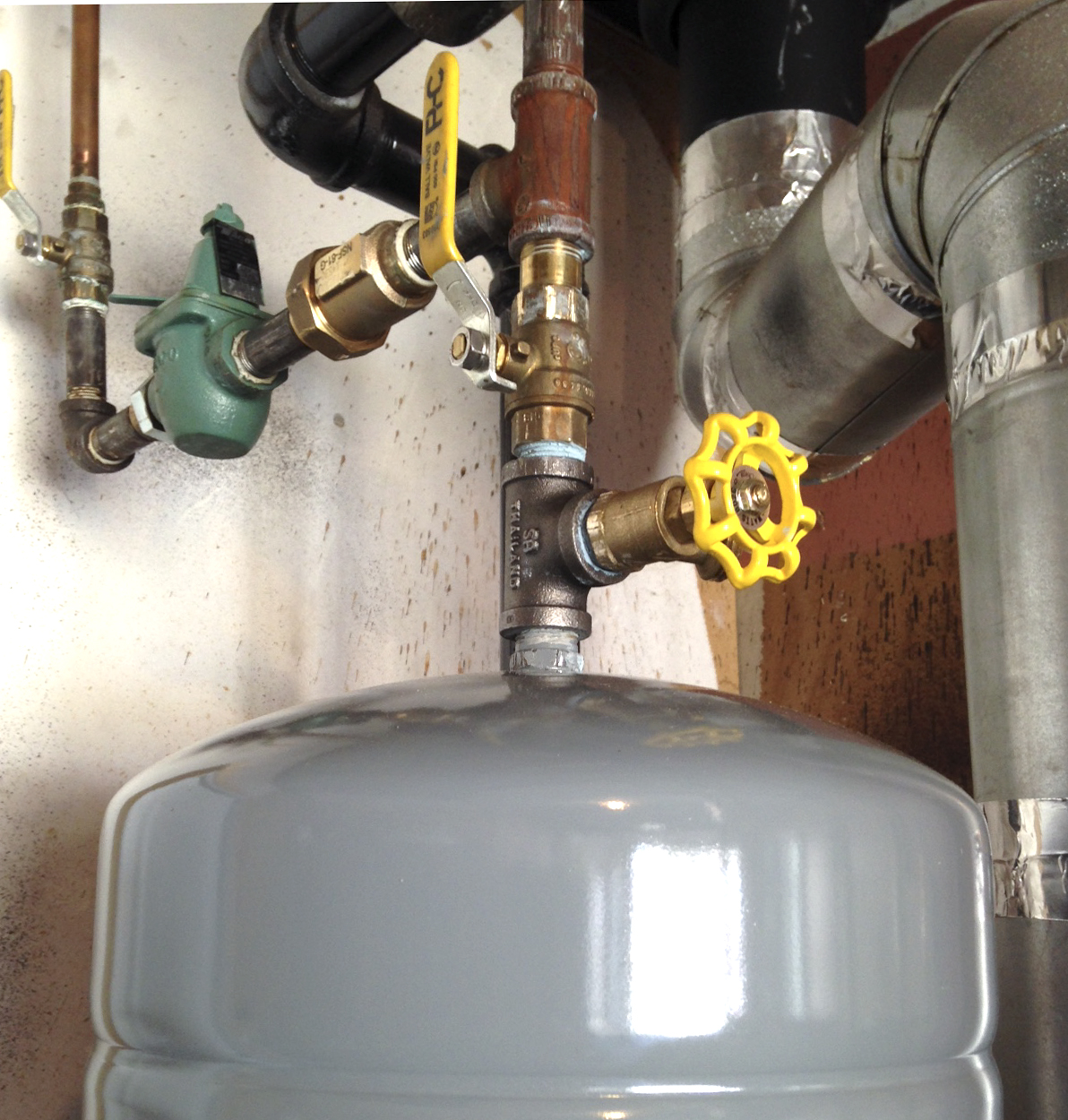 The tank charge can now be checked. If the tank still shows a charge, the diaphragm is good and the tank can be pressurized. So far, so good after 5+ years on this tank, feeder, relief valve and auto vent. Many of the tanks in that scrap steel dumpster didn’t last that long.
Recently, I was on a call for a water leak and had the opportunity to add these extra fittings after checking and finding that this tank had lost some of its charge. The valve core was replaced (Figure #2), the tank was charged to 12 psi (Figure #3) and reinstalled with isolation valve and drain (Figure #4).
Remember basic hydronic rules: 1psi lifts water 2.31′, which equals 28″. Hydronic tanks need to be pressurized to match system fill pressure and domestic water tanks need to be pressurized to match incoming street pressure.
Stay safe,  Wayne
ICM
Wayne Lawrence is an instructor for Oilheat Comfort Corp. oilheatcomfortcorp.com