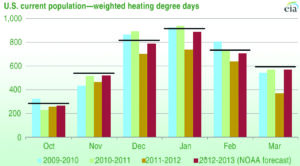 The U.S. Energy Information Administration is predicting that U.S. households are expected to use more heating fuel this winter compared to last winter, primarily because winter temperatures this season are expected to be near normal. Last winter had above-normal temperatures in most colder parts of the country. 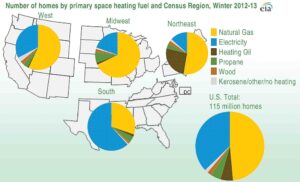 By fuel, EIA predicts natural gas heating demand for the October through March heating season will be up by approximately 14%, heating oil demand up 17%, electricity up 8% and propane up 17%. The figures are published in EIA’s Short-Term Energy and Winter Fuels Outlook for the 2012-13 U.S. heating season. EIA said consumption should be less than the five year average for all major heating fuels except heating oil.
The forecast reflects an expectation of a much colder winter east of the Rocky Mountains compared to last winter. The National Oceanic and Atmospheric Administration (NOAA) has forecast heating degree days will be up in the Northeast, Midwest and South by about 20% to 27%. Supplies should be plentiful for most heating fuels.
Inventories
Inventories for natural gas, the heat source for about half of U.S. households, are expected to reach 3.9 trillion cubic feet by November 1, a record for that time of year, said EIA.
Heating oil, burned by 6% of U.S. households for winter fuel, finds eight out of 10 users located in the Northeast. Lower heating oil stocks in the East Coast and Gulf Coast states, “…along with New York requiring heating oil with lower sulfur levels [See ICM cover story, October issue], are expected to contribute to a tighter heating oil market this winter.”
Propane heats about 5% of U.S. households. EIA said propane inventories totaled almost 76 million barrels in early October, up 32% from the same period a year ago.
Electricity is used by 38% of U.S. households for heating.
Click here for the full EIA report.
Industry response
The Energy Communications Council (ECC) points out that EIA’s projections are “…educated forecasts on which direction the weather, fuel supplies and prices might move in any given year,” and adds that “…the reality of the winter heating season may or may not match up with the data they have provided.”
ECC also says heating oil prices and usage can vary greatly among U.S. states and regions. The ECC’s John Huber and Kevin Rooney offered the following thoughts in regard to the EIA’s Winter Fuels Outlook. John Huber is the ECC’s chief spokesman and president of the National Oilheat Research Alliance, and Kevin Rooney is the ECC’s primary spokesman and CEO of the Oil Heat Institute of Long Island.
ECC, said Huber, expects “…the heating oil supply to be plentiful for consumers during the 2012-2013 heating season. In addition to increased supply, heating oil continues to become more versatile as more and more states transition to ultra-low sulfur fuel. These projections, coupled with very stable Northeast Heating Oil Reserve levels, suggest ample fuel supply throughout the winter months.”
Rooney pointed out, “It is important to remember that last year’s winter months were some of the warmest in U.S. recorded history.”
The ECC predicts residential heating oil prices to be two percent higher than last winter. This is predicated on the fact that more consumers are taking the heating oil industyr’s advice on conservation, combined with federal and state incentive programs that have encouraged consumers to weatherize their homes and replace older heating equipment with new high efficiency equipment. Add to that the use of alternative energy sources, such as biofuels and solar domestic hot water applications and the amount of fuel consumed is dramatically being lowered, said ECC.
The ECC is composed of the Delaware Valley Fuel Dealers’ Association, the Empire State Petroleum Association, the Massachusetts Oilheat Council, the Oil Heat Institute of Long Island, the New York Oil Heating Association, Inc., and the Vermont Fuel Dealers Association. It is funded in part by the National Oilheat Research Alliance  (NORA).
Finally, click on the icon in the right column for EIA’s Today in Energy News update.