I recently was called in to help size a heat exchanger for a Jacuzzi application. It seems the customer wanted to maintain the tub at 75°F when it was not in use and then hit a button and raise the setpoint to 105°F. They were looking for help in calculating the load and what size heat exchanger was needed to do the job.
The first thing we had to do was establish the load and how quickly the customer wanted the Jacuzzi to come up to the higher water temperature setting. To do this, we needed to know the volume of water we had, the temperature rise and the timetable. Here is what we had for information: the Jacuzzi held 600 gallons of water and was maintaining it at 75°F. The customer wanted to raise the tub to 105°F and they said one hour was an acceptable time frame. The first step is to convert the gallons of water into pounds of water. Why? We will get into that later, but it has to do with this thing we call Btus (British Thermal Units). Six hundred gallons multiplied by 8.33 (the weight of one gallon of water in pounds at 60°F, which is an acceptable number throughout most heating applications) = 4,998 lbs. 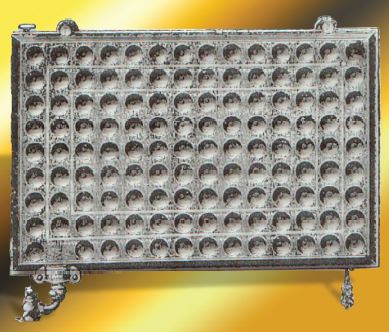 What is a Btu? It is an expression of energy. A man named Thomas Tredgold from England wrote a heating book back in the early 1800s called Warming and Ventilating of Buildings. In this book, he used the term “British Thermal Unit.” Tredgold took a POUND of water and heated it from 62°F to 63°F. He decided that one British Thermal Unit (Btu) was the amount of energy (heat) required to raise one POUND of water one degree Fahrenheit.
So this expression that we say and use dozens of times a day in the heating business was made up by some guy 200 years ago! We almost think of Btus as the Holy Grail of heating and in reality, it is just an expression of energy made up by a heating engineer who was trying to quantify what happens when one pound of water is heated up one degree Fahrenheit. That is why, when I was explaining to the contractor how to establish the load, we had to convert the gallons of water in the Jacuzzi to pounds of water in order to calculate the required Btu load.
If we were going to provide a circulator to pump boiler water through one side of the plate and frame heat exchanger to heat the Jacuzzi, we would have to calculate the necessary flow rate. To establish the proper flow, which is expressed as GPM (gallons per minute), we would start with the load. GPM = Btu/h / 500 x delta T; Btu/h is the load; 500 is the weight of a gallon of water (8.33) multiplied by sixty minutes in an hour (to convert Btus per hour into gallons per minute) and the delta T is the design temperature drop that the system water will experience as it delivers the design load (which is usually selected at 20°F).
So when establishing flow rate, it is necessary to convert gallons to pounds and introduce a time factor (60 minutes equals one hour). If we were to use the above Jacuzzi example to calculate the required GPM, it would look like this: 149,940 Btu/h divided by 10,000 = 14.9 GPM. (10,000 is 500 multiplied by the design temperature drop of 20°F). 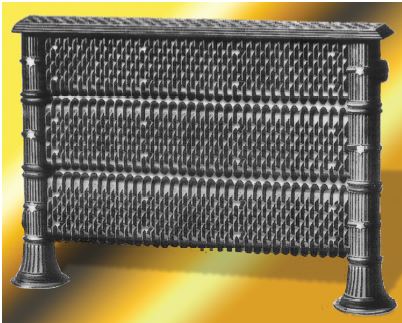 If you have had the chance to work on a steam system, you probably have come across this expression: “A Square Foot of Steam.” This came from the early days of steam heating and was used to describe the capacity of a radiator. The very first radiators looked like the one in Figure 1. The capacity of the radiator was derived from the square foot surface area of the radiator. The manufacturer said that one square foot of surface was equal to one square foot of radiation.
Which means WHAT? Well, back to our friend Thomas Tredgold. He not only gave us the expression British Thermal Units, he also came up with the term Square Feet of Radiation. And a square foot of steam is equal to 240 Btu/h when the steam inside the radiator is 215°F (which, by the way, is about one psi of steam pressure) and the room air is 70°F. This was Tredgold’s definition of a Square Foot.
You might also have heard the term EDR or Equivalent Direct Radiation. This evolved from the “A Square Foot of Radiation” expression. The radiator manufacturers were responding to the increasing demands from the public to change the style and size of the radiators. They didn’t want them to be so large and take up too much space. To achieve this, while still providing adequate capacities, the manufacturers had to provide a lot of surface area to a device that was taking up less space in the room (see figure 2).
This change also required a new term to describe the capacity of these new style radiators and thus EDR became the term to describe a square foot of steam. The Equivalent amount of Direct Radiation meaning IF this new style radiator looked liked the older flat style, it would have THIS amount of square foot surface area which equates to THIS amount of Square Feet of Radiation.
See the sidebar at right for an old and unusual, but apparently effective way to measure this factor.
Consider this information the next time you are asked to set a pressure-trol…all of the radiators installed in the house are capable of keeping the house at 70°F with 215°F steam (1 psi) on the coldest day of the year! When the steam piping was selected and installed, it was chosen from a pressure drop column of 1oz. per 100′ of pipe. You don’t need pressure to drive steam out into the system…you need good air venting to remove ANY air found in the piping and radiation! If you have any questions or comments, please call me at 1-800-423-7187