Clean sweep but keep the oil

Every story has an origin. According to Manheim, PA homeowner Tim Slusser, the story of his “New” home’s massive makeover started with a puddle in the mechanical room. He and his wife had just purchased the mid-’70s bi-level. Two weeks later, the home had a new roof. Water that found its way inside had destroyed part of an exterior wall and part of the second story subfloor. 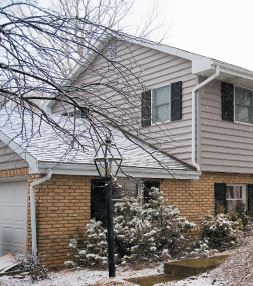 Apparently, bees also took a shine to the little hole where the rain got in. The pest control pro apologized to the homeowners for the large, up-front fee saying, “The nest has been active for a while; it’s a big one.”
Within several months, carpets that hid slicks of animal soiling, ‘70s-era bathrooms and mustard-yellow aluminum siding were all replaced to update the home.
Throughout the remodeling process, the Slussers wanted to boost the home’s energy efficiency. The attic, newly free of angry bees, had only four inches of fiberglass insulation. An additional 30 inches of blown-in Atti- Cat fiberglass made an immediate improvement. The block walls of the basement were covered in foam insulation, then pine tongue and groove. Several windows and doors were also replaced.
“At every turn,” added Slusser, “we heard cha-ching, cha-ching.” Money was moving into the home at a clip I’d never imagined.”
The last remaining project—a job Slusser knew he’d hire a team of professionals to handle —was to replace the home’s mechanical system. Although in good condition, the system was designed for a larger, less efficient home. After a heat load analysis, it was clear that the boiler was originally 30 percent larger than it needed to be. 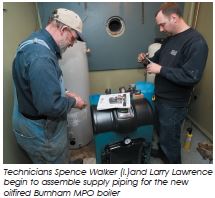 “We’ll, it was the last wad of bills to hit the bottom of our money pit,” complained Slusser. “We just couldn’t do the work we’d done on the house to see the last remaining task un-done. Clearly, the boiler was a lot bigger than it needed to be.”
Oversized much?
The home’s original mechanical equipment had been replaced in 2006 with a boiler of equal size. A 180 MBH, oil-fired New Yorker boiler with an internal DHW coil provided all the heating needs . . . and then some.
“A manual-J heat load calculation at the 2,200 square-foot home resulted in a 48,000 Btuh heat loss, with an outdoor temp of 10°F and an indoor temp of 70°F,” said Dave Yates, owner York, PA-based F.W. Behler, Inc., hired by Slusser to perform the retrofit. 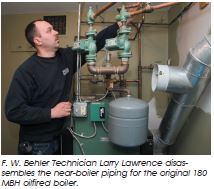 “Using Taco’s FloPro Designer software, I learned quickly that the New Yorker was rated for an output nearly three times what the house needed,” explained Yates. The boiler was oversized and short-cycling.
“The boiler must’ve been sized by the ‘curb’ method, from a block or two away,” added Yates with a grin. So, in early 2012, with oil prices hiking, it was time to downsize.
The bees and the big boiler were both removed. An old water softener and wholehouse UV light—both of which were well past their prime—were removed. Groundwater in southern PA often contains coliform bacteria, high nitrate levels and moderate amounts of scale, so the equipment was ready to go.
Honey, I shrunk the boiler! 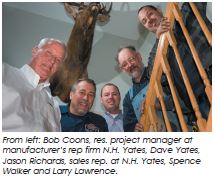 The system Yates chose includes a 64,000 Btuh Burnham MPO-IQ boiler with Beckett Burner and a 75 gallon Bradford White indirect water heater with on-board electronic anode and thermostatic scald-guard valve to ensure both longevity and bather protection. “We’ve installed Bradford White equipment for years and have never been disappointed.”
Technicians Larry Lawrence and Spence Walker carefully laid out all the mechanical components before lighting a torch. The seven-by-eight-foot area wouldn’t leave room for error. “We had to conserve space on this job,” said Yates. Yates built his parts list carefully. One of the first, new-generation ECM circulators from Taco—the yellow and black, variable speed BumbleBee—was ordered. “The Slussers removed a bunch of bees from the home months ago, but this was one they were eager for us to find a permanent place for,” quipped Yates.

The ECM circulator provides flow to the upstairs and downstairs zones of the house. At each loop, the system uses a one-watt Taco Zone Sentry zone valve.
According to Yates, the Taco hydraulic separator, mounted directly above the boiler,
helps the home’s two heat zones and the Bradford White indirect “play well together.”
A 007 circulator is used as the main boiler pump, providing steady circulation within the short loop. Yates included a half-inch Watts RBFF (residential boiler fill fitting) to ensure the system stays full, and a Taco 4900 air and dirt separator to keep the fluid pure.
“The BumbleBee is a Delta-T circulator,” said Yates. “So it ramps up to full speed
momentarily until it finds the difference in supply and return temperature, then backs
down to the ideal flow rate for one or both of the zones.” A digital readout on the face
of the circulator flicks between readouts for GPM and electric consumption.
“On this job, it usually coasts along at sixand- a-half GPM, consuming only 9 watts,”
said Yates. Couple that with the two, onewatt Zone Sentry valves and we’re using
just 11 watts instead of 174 watts for two circulators! In fact, the ECV (Energy Conservation Value) is $58.73 in the first year, but when we look at a 20-year ECV with
an annual increase in cost for electricity, it shows a savings of $1,947.87.”
“I fully expect their home to use half, or less, of the heating-oil previously consumed while maintaining optimal comfort,” continued Yates. “And: reduced power-consumption.”
Shoe-horned in
“Access to the inside of a Burnham MPO is convenient,” said Yates. “The door, which is in the front of the boiler, just swings open.” To help overcome tight space constraints, the Bradford White indirect was placed to the left of the boiler so that the service door could swing in front of the tank. To the right of the boiler, the original Well-XTrol tank was pushed several inches from its previous position.
The homeowner didn’t want to expose all-new water fixtures to any scale, even if it meant using a dual tank system. So a twin-tank Watts water treatment system was installed; while one tank is recharging, the other conditions incoming water.
No reserve capacity is required to carry the tanks until a recharge can happen. There’s no possibility of the bypass valve opening while one tank recharges. The new Watts system can be used in a timer or metered configuration and when set to meter, will use
less salt than the previous, timer-only tank.
A new 12 GPM Watts whole-house UV disinfection system accompanies a media filter on the wall above the water softener. If power is lost to the house, a solenoid valve closes; no contaminated water slips by the UV light to re-seed freshly-sterilized domestic water. 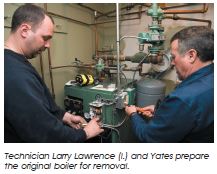 “The old UV light was a 7.5 GPM model,” said Yates. “I prefer a little more flow capacity to accommodate quick bursts and numerous fixtures running simultaneously.”
Aside from the MPO boiler’s inherent efficiency (Yates found 89.6 percent at the flue using an electronic combustion analyzer while adjusting the Beckett burner), it’s equipped with a compact, three-pass cast iron heat exchanger. The boiler also includes the optional IQ panel that allows the addition of features like outdoor reset, low water cutoff and auxiliary highlimit for additional protection, enhanced efficiency, and that complies with new 2012 government regulations.
The large-volume indirect tank helped to lengthen boiler run-time while, at the same time, reduce boiler size overa l l — i m p r o v i n g efficiency and promoting a clean burn
cycle.
Yates wanted a circulator with an internal flow check on the water heater, so he installed a Taco 00RIFC to tap the boiler. The three-speed circulator remains on low, letting supply water take it’s time through the big coil inside the tank.
Bradford White tanks can be ordered with a tempering valve on top of the tank so that water exits at safe temperatures. “We can store 140°F—or higher—water while the outgoing supply temp is only 120°F,” said Yates.
The removed New Yorker boiler had a six-inch flue, while the MPO required a four-inch pipe. After sealing up the new flue, Yates covered the oversized terracotta chimney liner with a polished diamond plate ring as a finishing touch.
“We’re glad that Bob Coons and Jason Richards from N.H. Yates [manufacturer’s representatives for Burnham and Taco based in Cockeysville, MD] were able to stop by on the day the boiler went in,” said Yates. “It was good to have quick access to product information.”
Reuse, reduce (oil consumption)
It would’ve been a shame to discard a healthy, sixyear-old boiler. The Slussers knew that the top of a scrap heap was no place for it. Months before Yates and his crew arrived, the
Slussers were visiting neighbors who lamented the fast approach of winter, voicing concerns about whether or not their old boiler would make it through another season.
The neighbors’ enormous coal-to-oil conversion drank 240 gallons a month at the height of the heating season. The old farmhouse needed an energy retrofit of its own—but at least they’d replaced all the old doors and windows.
While Yates was at the Slusser home taking measurements and completing the heat load calculation several weeks before the install, he visited the neighbor’s home at Slusser’s request. Twenty minutes later he confirmed the Slusser’s suspicion: “Yep, your boiler would be a good fit for their place.” 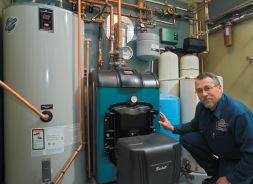 For a yard sale price, Slusser sold the boiler to his neighbor. Along with it, the neighbor received the expansion tank, isolation valves and some perfectly fine Taco 007s.
“We made a two-fer out of it,” said Slusser. “What started out as a nasty, money pit problem led to huge improvements here, and for our neighbors, too. We’re delighted with the way things turned out.”