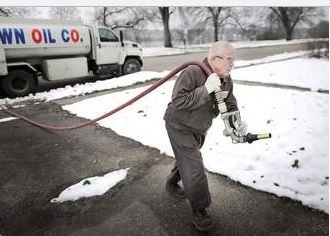 JANESVILLE, WI—Larry Brown descended the steps of his Chevrolet oil tank truck in two small leaps and disappeared around the back, past the red-and-blue lettering on his truck that reads “Brown Oil Co.”
Brown unreeled a red fuel hose and hauled it across the snow, through the yard of a weathered farmhouse in the town of Avon. He linked the hose to a pipe on the side of the house and pumped red-dyed fuel oil into a holding tank in the basement.
The whole time, Brown whistled a tune. It seemed less like a song and more a physical function—the way a power generator kicks on and off whenever it needs to.
Brown has run Brown Oil in Janesville since 1986. And he has hauled diesel, gasoline and fuel oil to customers for 50 years this December—ever since he was 20 years old.
Brown now is 70, yet his age doesn’t quite show. He still delivers oil and fuel oil in one of his own trucks, even though he employs drivers who are much younger than he is.
Brown Oil is one of only a few remaining independent oil haulers, and Brown has remained in business by continuing to find new customers outside the dwindling fuel oil home heating market.
For years, home heating has been become more and more dominated by natural gas and LP gas, a trend that has put dozens of other oil haulers out of business.
Brown Oil continues, and it continues to change, although Brown doesn’t acknowledge he has changed much. He still  runs dozens of deliveries a week in his tank truck, long after most in the business would leave the work to younger men.
“I don’t have a hobby, and I’ve never fished or hunted a lot,” Brown said. “This job is me, and I don’t feel like closing up shop and dying. This job is my alternative, I guess.”
In his 30 years running Brown Oil, Brown has marketed his services to an ever-broadening clientele, including road construction crews, quarry pits and local marinas, all while holding onto a shrinking base of fuel oil home heating customers.
This week, Brown delivered fuel oil to several homes and farms throughout the county alongside commercial deliveries that included a semitrailer truck service garage on Bell Street in Janesville. One day this week, he delivered 250 gallons of kerosene to a Beloit business.
Brown boiled down the 50 million gallons of oil he estimates he has delivered to customers over five decades, summing up his concept of business diversification:
“There’s always different things going on. A chance for new customers all the time. You’ve always got to find what’s going on and figure out how to reach it.”
The business of oil has become more complicated for independent haulers such as Brown, in part because of new federal regulations and in part because of the vagaries of the commodities market.
Brown now is in a partnership with Cambeck Petroleum, another Janesville oil company. He shares space with Cambeck on South Pearl Street in Janesville, the same location where Brown Oil has been since Brown started it.
Through an agreement, Brown gets fuel from an underground storage terminal Cambeck owns off Highway 14 on Janesville’s north side.
Brown says he stopped trying to outsmart the oil market years ago. He said his edge lies instead on the human side, and it’s a major reason why he still delivers oil to customers, sometimes for 10 or 12 hours a day.
As he wrapped up a stop at a truck fleet service shop in Janesville, Brown answered his phone. A local excavating contractor called to ask Brown if he could wait at the truck garage. The contractor needed to refill his truck’s utility fuel tank.
It would delay Brown’s next stop, a farm on the other side of Rock County, but Brown didn’t seem flustered.
When the contractor pulled up, Brown slung his arm over the man’s shoulder to greet him. As he worked up the bill for the refuel, he joked with the contractor and asked about his plans for the winter.
“Prices and market pressures and all those things don’t mean as much when you’ve got camaraderie with people, your customers,” Brown said.
Brown’s first business agreement was with his father, Arthur Brown, who had delivered oil for years as a contractor for Lein Oil in Janesville. Arthur died in his 50s after years of health problems linked to childhood tuberculosis, Brown said. Brown himself was just 20 at the time.
Brown remembers the day in early December when he promised his father he’d take over the family oil trucking route. At the time, Brown had an infant son, and his dad’s truck had 175,000 miles on it.
The floorboards were so rusted that in winter, the cab stayed as cold as the air outside.
It wasn’t until 20 years later that Brown founded Brown Oil, but Brown had learned how to be an oil truck man from the age of 5, when he began riding with his father on weekends and helped pull the truck’s heavy fuel hoses.
“The rest is my history, the mark I’ve left on the road,” Brown said. “I think he’d be proud of me.”
Article courtesy: GazetteXtra.com