Written on: January 9, 2013 by Mike SanGiovanni

NYC Gets Greener with Bioheat® Fuel to Advance Sustainability

Bioheat says “Thanks” by awarding $30,000 to Charities that also “warm” NYC
In December 2012, New York City launched its mandate for traditional home heating oil to be blended with 2 percent biodiesel, also known as Bioheat Fuel. Already the nation’s largest municipal user of biodiesel, NYC takes the lead in sustainable heating, reducing the city’s carbon footprint and replacing up to 20 million gallons of petroleum annually. The Bioheat bill advances one of the major goals of the city’s sustainability agenda, PlaNYC, committed to having the best air quality of any major city in the nation by the year 2030.
As a thank you to the city, Bioheat recently launched their NYC Proud 2B2 Renewable Warmup campaign. This campaign will award three out of eight nominated charities a grant in the amounts of $15,000, $10,000 or $5,000. Between January 28th and February 17th, 2013, NYC residents are asked to go to BioheatOnline.com to vote for the charity they feel best helps “warm” NYC ..
“Our objective with the NYC Bioheat Proud 2B2 Renewable Warmup campaign is twofold. We wanted to give back to the NYC community in more need than ever after the impact of Hurricane Sandy. We also wanted to do it in a way that would increase the awareness of Bioheat Fuel’s benefits and the impact it can have on the environment to other regions,” said Paul Nazzaro, President of Advanced Fuel Solutions and advocate for the National Biodiesel Board’s Bioheat education program.
New York City’s mandate replaces 20 million gallons of petroleum annually with a local, renewable resource that’s also cleaner burning. It’s the carbon equivalent of taking 30,000 cars off the road in New York City. According to a National Biodiesel Board study, it has the economic impact of creating 780+ biodiesel production jobs in the region and $42 million in household income.
Nazzaro adds, “It is important that the progress continues. 80% of oil heat households in the United States are located in the Northeast region and purchase about 5.1 billion gallons of heating oil in a year. If the entire Northeast region switched to Bioheat Fuel, we would replace 100+ million gallons of oil with a local, greener resource each year.”
“The New York Oil Heat Association (NYOHA) has long fought for a new standard in heating oil,” said the association’s CEO John Maniscalco. “The heating oil of the past will soon be gone. Instead, Bioheat Fuel will become the standard in home heating sustainability. NYC should be proud to lead the effort and proud ‘2B’ staying warm.”
Bioheat Online is a resource for consumers and oil heat dealers brought to you by the National Biodiesel Board and Advanced Fuel Solutions (AFS), a leading additive supplier and market consultant in the fuel industry for 13+ years. Consumers can go to the following Web site for the contact information to write their Senator to support a biodiesel tax incentive for 2013: http://www.senate.gov/general/contact_information/senators_cfm.cfm/.
==========================================

As of January 1, 2013, the Independent Connecticut Petroleum Association has become CEMA, the Connecticut Energy Marketers Association. More information is available at the association’s new website, http://www.ctema.com. 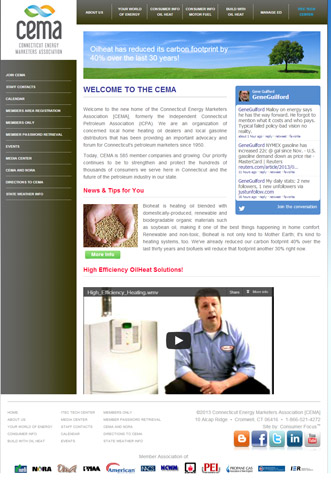