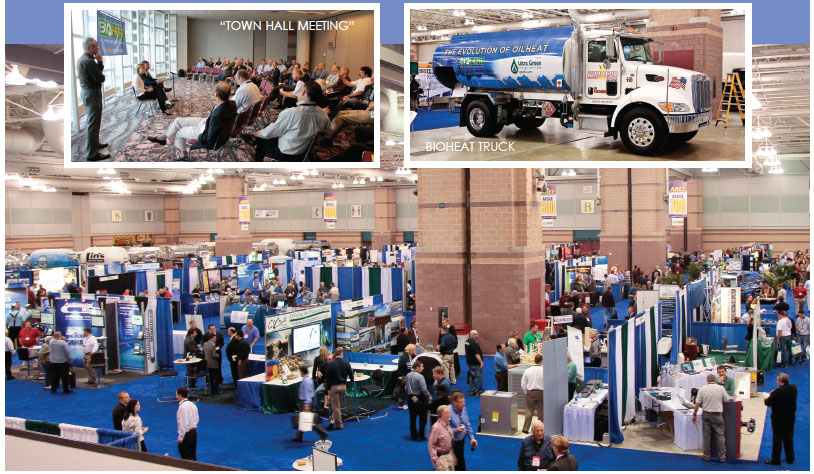 Organizers of the Atlantic Region Energy Expo 2012 (AREE 2012) report that they have concluded another successful trade show and convention. This year, the show partnered with the National Biodiesel Board to “explore the evolving world of home and building comfort, efficiency and environmental responsibility.” Traditionally held in New Jersey, the show is organized by one of its sponsors, the Fuel Merchants Association of New Jersey (FMA). Other association sponsors include the Independent Connecticut Petroleum Assn., the Delaware Valley Fuel Dealers Assn., the Empire State Petroleum Assn., the Mid-Atlantic Petroleum Distributors’ Assn. and the Virginia Petroleum Convenience & Grocery Association. As in past years, it was held at the Atlantic City Convention Center, this year on May 1-3.
Attendees visiting the show couldn’t help notice the Bioheat® theme; it was everywhere. Calling the availability of Bioheat a sign of changing times for oilheat dealers, FMA Executive Vice President Eric DeGesero said, “We’re proud that AREE was the first industry trade show and convention officially combining traditional fuels with the renewable biodiesel found in Bioheat.” He pointed out that Bioheat is the oilheat dealers’ best option to adapt their businesses in the 21st century.
There were several sessions on the topic specifically designed to provide additional information and to answer questions from attendees who may have been interested in transitioning to bioheat but may have felt that they didn’t have sufficient information to make an informed decision. Paul Nazzaro, the National Biodiesel Board’s liaison to the petroleum industry and a frequent contributor to ICM, hosted several sessions that explained the need for change in an industry increasing under attack by its competitors.
“Bioheat is the first real opportunity for marketers to make a progressive shift in decades. Bioheat is a more desirable product to their customers, offering enhanced energy security, benefits to health and the environment, and American jobs,” said Nazzaro.
In addition to the more formalized business sessions on Bioheat, a special “Townhall Meeting” was held to answer any questions dealers may have about the process and advisability of switching to bioheat. The Townhall Meeting approach provided an informal and more intimate setting, which facilitates interactive dialogue.
This year, overall attendance for the trade show and convention was 3,500, slightly below past years. Nevertheless, the trade show featured over 250 exhibits, including more than 40 new exhibitor companies, and showcased 28 vehicles, including a motorcycle and luxury sports car, both powered with biodiesel. In addition, more than two dozen business programs and workshops were held, including those mentioned above.
This year also marked the first year of participation by the Air Conditioning Contractors Association—New Jersey Chapter as AREE continues to expand its presence as the premier energy marketing convention and trade show in the Northeast.