By Tim Saunders, Hannah Story, WDBJ-7 (Roanoke, VA)
Gretna, Va.–Good news for Pittsylvania County: dozens of new jobs are coming to town.
Amthor International, which is a tanker truck manufacturer, has been in Gretna since 1992. Now, they will be expanding, adding 90 new jobs over the next five years, and much more.
“Amthor International, the largest tanker truck manufacturer in North America, is going to invest $7.1 million to expand its operations in Gretna, Virginia,” announced Virginia’s Secretary of Commerce and Trade, Todd Haymore.
Amthor International already employs 110 people, but with a bigger facility in the works, and plans to double production output, they will need more workers.
Work on the new building hasn’t begun yet, but that didn’t stop all of those involved from having a ceremonial ground-breaking.
Amthor is a fourth generation family-owned business that is passionate about sticking to its roots.
“Over time there were some locations that would try to get us to move. West Virginia was one of them, Kentucky, North Carolina, and you know, they tried their best and you know, at the end of the day we knew where we needed to be,” says Brian Amthor of Amthor International. 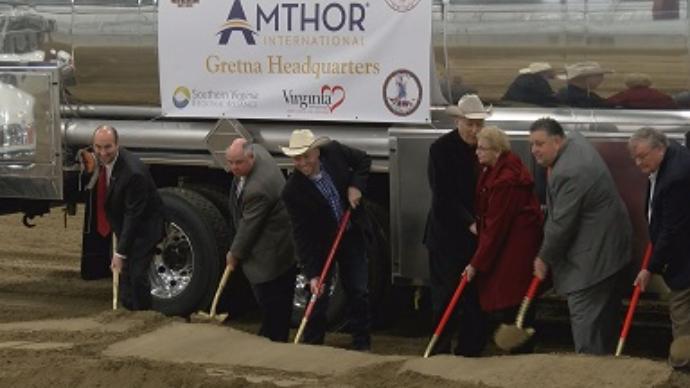 Amthor says his family couldn’t bear to leave Pittsylvania County.
“We are going to be able to see this company reach the centennial milestone in ten years, which is really really cool,” he says.
Gretna Mayor, Keith Motley, says this move is huge for not only the town, but also the county, and even the state.
“We’re proud that we can say that there’s a made in America, made in Virginia, made in Pittsylvania County, made in Gretna product coming out of Amthor International that is going across North America and continents across the water,” says Motley.
He says this is the step in the right direction for the town.
“We used to be “Ain’t no big thing, but we’re growing,” and today is a prime example of how we’re growing,” says Motley.
Gretna will also be home to the Amthor International Corporate headquarters upon completion of the new building.
Work on the new facility is expected to be complete in 2019.
Article courtesy: WDBJ-7 (Roanoke, VA)