Past & Present
It has been a long, action-packed decade for Bioheat® market development.  Much has been written about what has been referenced as the Oilheat industry’s renaissance. Thousands of road miles, countless professional management hours and millions of dollars have been invested both in validating Bioheat technical performance characteristics as well raising oil heating consumers’ awareness of this terrific home heating oil. 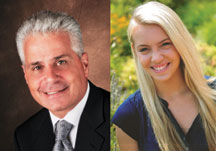 Paul Nazzaro is Principal of the Nazzaro Group and frequently represents the National Biodiesel Board. Jacqueline Devine crafted the proposed legislation when she was 13.

Having just achieved its largest production year yet with over 1.1 billion gallons of biodiesel produced in 2012, the U.S. biodiesel industry celebrated 20 years of momentum and growth during the 2013 National Biodiesel Conference and Expo held early February in Las Vegas.  The upcoming year will be packed with more communication, education and outreach for fuel oil dealers eager to step outside their comfort zone as they move closer to 21st century business strategies, the core centered on Bioheat marketing.
The Future
I have had the privilege of meeting thousands of individuals during the years I have spent sharing the biodiesel and Bioheat message. One person who has made an impact with me is Jacqueline Devine. She resides in Westport Connecticut with her parents, Michael and Catherine,  and her brother Cole. I need not say more about Jacqueline other than sharing with you her story on how she set out to make a difference. Making a difference starts with establishing goals, objectives and dreams and not yielding until you make your mark. There can be no debate; Jacqueline made her mark and, more importantly, she and her friends are your future customers. Listen to what they have to say.

Each era is defined by something different. Whether it’s an economic, political, or social shift, each generation of individuals brings something new to America that helps to shape it into the country it is today.

During my past few years in High School, I have been continuously told that my generation is defined as the ‘Green Generation.’  We, as a body of people, represent a change from conventional to revolutionary by means of technology and more importantly, energy.

Just a few generations ago, people relied heavily on fossil fuels to power their homes, factories, and vehicles. No one knew the dangers or limitations of the fuel and no one could project that in a matter of decades, there would be a shortage and an environmental crisis across the globe.

We, as the new generation, have come to realize that this conventional fuel isn’t the magical source of energy it used to be. We have come to realize that there needs to be a change. This change will inevitably be alternative energy. America will, at some point in the near future, need to develop alternatives to petroleum that can fulfill the demands and the power of oil.

There have been many proposed methods of energy use. Some of which include solar, wind, hydrogen cells, nuclear fission and fusion, and Biofuels. Like fossil fuels, each energy source has its upside and downside. Implementing solar, wind, and chemical reaction energies can take an exponentially larger amount of money than using oil. They can require infrastructure far beyond the means of many American households.

The biggest upside to Biofuel is that it can be used in place of heating oil. In other words, there is no need to change a home’s heating system. So long as a home, building or vehicle has a diesel engine, it can be powered by Biofuels.

However, the concept of alternatives can still frighten the average American citizen. To some politicians, Americans, and even kids my age, Biofuels are just something that may, or may not, replace petroleum in the future. Some see it as an inconvenience or unnecessary. Some see it as too controversial or even ‘weird.’ But I have come to realize that if you look at the big picture, biodiesel is the solution to the oil, economic, and job crisis in America.

I too fell into the category of naysayers until I was in middle school. When I was eleven, I saw ‘An Inconvenient Truth,’ a movie based around the concept of global warming and the effect it was going to have on the world. I can remember leaving the theatre being stunned and driven to make a change.  At 14, I was determined to take a stand with the resources available to me.

When I was a freshman in High School, I joined a club called JSA (Junior Statesmen of America). I had always been vocal regarding domestic and international conflicts and JSA would give me the opportunity to debate and become a leader. However, throughout my first two years in JSA, there was no defining moment where I felt like I had made a difference. It wasn’t until my junior year when that changed.

Each winter, my school’s JSA chapter would go to Washington, D.C. to debate a docket of bills that had been hand selected by our club’s student officials. I had submitted bills freshman and sophomore year, but only my junior year bill was accepted. I was elated and eager to debate something that I felt was such a hot topic.

To me, it was more than just a bill. It was my opportunity to make a difference. The bills that passed through the convention would be sent to the U.S. House of Representatives for deliberation. If I could get my bill passed, it would be in the hands of the most influential people in the country.

With the help of two other peers, I passed the bill during my convention and it was sent to Capitol Hill. I can’t explain the happiness I felt when I heard the Senate chair state, “This bill passes.”* It was almost as if I felt I had fulfilled my American duty with my efforts to make a change. I accomplished something that I had always wanted and can now say that I have begun my journey to making my change.

And even now, as I look back one year later, I feel as though a fire has been lit within me to continue to make this change. I want to continue to be the leader that I was in Washington D.C.  I want to help promote the benefits of Biodiesel and Biofuels. But most importantly, I want to be able to influence the people around me to make decisions that will ultimately help America in its prosperous future.

Lesson learned; never underestimate the passion and drive of our young adults. Jacqueline was determined to take a stand with the resources available to her. Fuel oil dealers like yourself have countless resources available to you that will help jump start your transition to Bioheat. It’s a simple fork in the road which you face: continue to sell carbon or sell the new improved home heating oil, Bioheat.
“If not Bioheat, then what”? 978-258-8360.
Paul Nazzaro, The Nazzaro Group,
[email protected]
FOLLOWING IS THE TEXT OF JACQUELINE’S BILL. It was passed by a mock Congress and was then sent on to an actual congressperson. Jacqueline was 13 years old when she presented this bill:
The contents of the bill Jacqueline introduced are listed below:

809H A BILL TO REDUCE EMISSIONS FROM FACTORIES ACROSS AMERICA BY SWITCHING TO BIODIESEL
Factories in America are one of the leading causes of global warming. They produce 40% of the pollution in the United States. Each year, over 20,000 factories in the U.S. produce four billion pounds of toxic chemicals that are admitted into the atmosphere. […] Factory emissions contribute to these gases in the atmosphere and further the harmful effects of pollution. Alternative fuels, such as Biodiesel, can be created out of soybeans, corn, algae, and other renewable resources. Biodiesel burns cleaner than regular conventional heating oil, and is better for the environment. If factories switch their oil system from a fossil fuel to Biofuel, then the rate of gases emitted will not only decrease, but also the Biodiesel will better the environment due to the fact that the oil is renewable.
BE IT ENACTED by the Senate and House of Representatives of the United States of America in Congress assembled, that:
Section 1: Large factories across the U.S. shall switch from the use of conventional oil to Biodiesel. Large factories shall be classified as a building producing extensive amounts of products that are purchased by many Americans.
Section 2: The money needed to support the transfer to Biodiesel shall be funded by the recent tax incentives passed in regards to alternative energy.