Airing out some ‘airy’ problems

Hydronic systems are filled with water, so any air in the piping system rises to the high points. This air must then be vented out of the system. If the air is allowed to gather at these high points, it can prevent the circulation of water. A typical circulator pump cannot push the air down a vertical pipe, since air is lighter than water. Only positive displacement, by means of opening a drain and pushing the air down the pipe with more water (known as “purging”), will remove the air pocket. 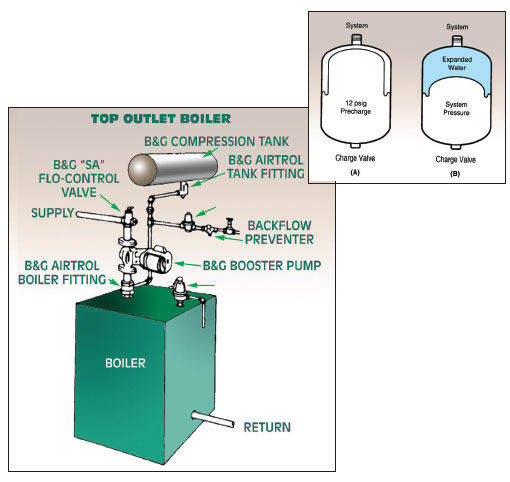 Once you have vented the high points of the system, circulation can take place. However, air problems can still occur. We must provide some means for preventing air from getting back into the piping system. This is because water “holds” a percentage of air in solution. As the temperature of the water increases, the amount of air held in solution decreases and is released in the form of air bubbles. In a hot water system, large quantities of air are released in the boiler when the water is heated. The air bubbles will travel out into the system and find low velocity areas where they will collect, causing air binding and no circulation. This will require the venting of these air pockets again! When this air is vented, the system’s pressure drops, causing the fill valve to respond, bringing in more water. This sets up a neverending cycle that is not only a nuisance, but is also very corrosive to the system components.

Control it or get rid of it!