A Heavenly fix to an old problem 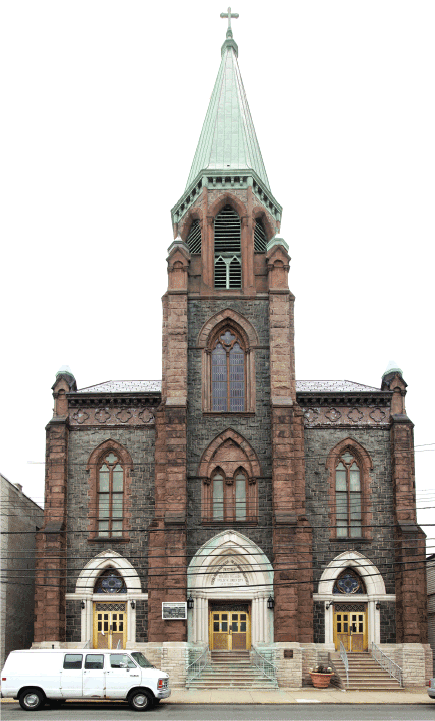 Replacing the old, worn out steam system in this 118 year old church gives everybody a warm feeling, at considerable cost savings

When the first Polish Catholic Parish in New Jerseywas founded—1874—Jesse James was still robbing trains and President Ulysses S. Grant was President. In that year, St. Anthony of Padua Parish was founded in Jersey City to meet the needs of the growing Polish immigrant population. In less than 20 years, the parishioners were able to erect the current church building, a Victorian-Gothic brownstone edifice designed by Louis H. Giele, featuring Felix Lorenzoni marble altars and Munich School stained glass windows. It took two years to build and was completed in 1894. Since then, the old church building has greeted thousands of Sunday congregations with a warm, welcoming atmosphere—most recently courtesy of its 35- year-old steam boiler and oil heat.
But getting that church building warm enough was a time-consuming and expensive endeavor. First of all, the steam coils in the ductwork did their job and heated the air, but there was no mechanical method of moving the warm air into the nave, the main church area where the congregation sits. The gravity system relied on convection alone, so it took, said Church Maintenance Engineer Waldemar Demorit (whom everybody calls Walter), “…hours and hours and a lot of fuel” just to raise the temperature from 55 to 65 degrees, as the warm air eventually found its way to its intended destination.
The old steam boiler finally failed last fall and perhaps, reasoned Walter, “enough was enough.” Maybe it was time to consider an upgrade. 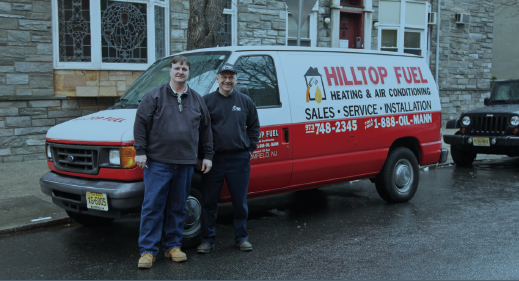 An excellent example of the value a full service supplier can bring to the table is the fact that Walter contacted their oil supplier, Hilltop Fuel, in Fairfield, NJ, rather than a general contractor, primarily because of the trust that was built between the parish and its long term oilheat provider over the years.
He asked them to come out and see what could be done. When Service Manager Doug 8 ICM/June 2012 Below: Hilltop Fuel’s Doug Doerflein, Service Manager (L.) and Service Technician Tom Piano, came up with a practical solution to St. Anthony of Padua Roman Catholic Church’s failing steam system. Doerflein and Service Technician Tom Piano, who had routinely serviced the Parish heating equipment, evaluated the system, it was obvious the old, leaking steam boiler didn’t have, well…a prayer of being repaired. And thanks to their relationship with St. Anthony’s, converting to gas was never an option. 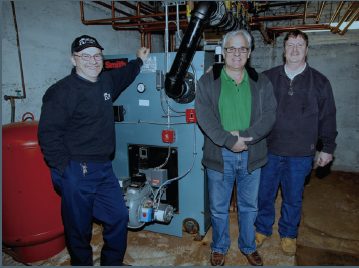 Piano, Waldemar Demorit, Maintenance Engineer at St. Anthony’s, and Doerflein stand before the new hot water boiler that replaced the 35 year old, leaking steam unit. This boiler supplies heat for all ten zones in the building.

It was also evident that there had to be a better way of getting that heated air into the church proper. Steam is old school. Although the church is heated with hot air, hot water is arguably the way to go. Why not blend the two?
Doerflein contacted one of his suppliers, and George Vankat, Thermo Pride’s District Manager, said he had just the equipment needed to fill the bill. The collaboration resulted in a proposal to the church to install a new boiler and a hydro-air system, which would circulate air over coils through which hot water circulated. They would be much more efficient than the old steam boiler and its passive convection system. Thermo Pride supplied eight hydroair units and Hilltop replaced the old steam boiler with a Smith hot water boiler newly piped to ten zones.
The Thermo Pride units feature internal coils and blowers run by electronically commutated motors (ECM), which are much more efficient than standard PSC motors. 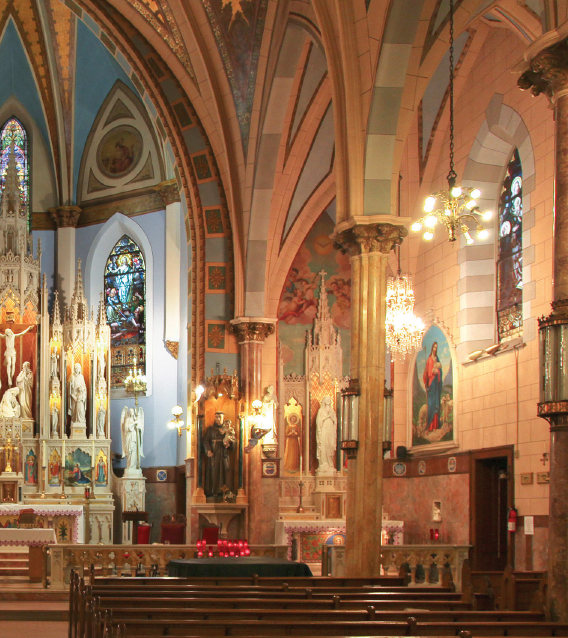 Two new oil tanks were also installed in the basement—as mentioned above, they decided to stay with oil, especially now that the efficiency of the system was vastly improved. For controls, Hilltop installed an outdoor reset unit from Tekmar, which senses the outdoor temperature and readjusts the heating system water to the minimum water temperature needed to satisfy the heat loss of the building. Outdoor resets are highly recommended for hydronic systems. 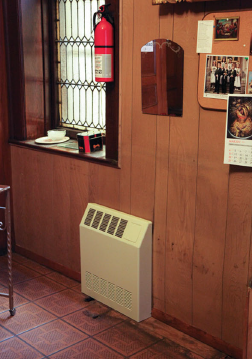 Churches are, by nature, serene places, so one major concern was noise: with the old system, it was relatively quiet with no blowers to add their voice to the choir; but the new system could be a cause for concern. Fortunately, the noise issue is nonexistent; the new ECM powered units are quiet and far enough away from the vents that their contribution, if any, is not noticeable. The air conditioners are much noisier, said Walter.
In addition to the eight air handlers, which are used to heat the nave and a chapel, the boiler feeds two other zones—one in the sacristy (the room off the altar in which the Priest and altar servers prepare) and one in the basement, a social meeting hall. In the case of the latter, hot water baseboard was installed so the room could be turned off or on as needed. The smaller sacristy, which had traditional radiators, is fitted with three Beacon Morris Kickspace heaters, an alternative to baseboard, through which hot water is circulated from the boiler via flexible PEX tubing. An internal fan blows heated air into the room. The Kickspace heaters are covered with wall mount cabinets and sit in place of the old radiators. 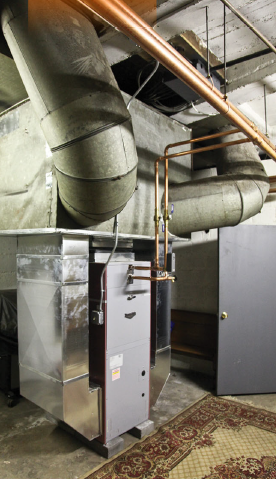 The Church Rectory is not part of the system, and has its own—albeit aging—boiler, and air conditioning is a completely separate enterprise. The self-contained AC units are placed in the main church building and are serviced by a different company, said Doerflein.
The installation, which took a few months, was completed for Thanksgiving, 2011. In the meantime, there was some worry that the church wouldn’t have heat for Sunday Mass during the transition; but it only took a few air handlers to get the space comfortable enough for the parishioners (and as luck would have it, the weather was cooperative). It is said that the Pastor, Reverend Joseph Urban, did report that it got a bit chilly on the altar at times.
With the new system up and running, “Walter” Demorit says the thermostat is now adjusted about an hour before services start and the church is warm and cozy and ready for use in that short time, a considerable improvement all around.
So perhaps, for St. Anthony of Padua Parish in Jersey City, the failing of that old steam boiler may have been a blessing in disguise.