Float and thermostatic traps (or F&T) handle condensate, air and steam differently than other traps. The thermostatic element is like the element found in radiator traps. It is normally open and its function is to pass air and other non-condensable gases into the return line. Once steam arrives at the trap, this element snaps shut, preventing steam from passing into the return lines and its job is finished until the next cycle. The float part of the trap now takes over and drains condensate as it forms. The float is attached by a lever to a plug that sits against the discharge orifice. It is normally in a closed position, until the condensate starts to arrive. Naturally, the temperature of the condensate makes no difference to the float, so as soon as the condensate enters the trap body, the float lifts the plug from its seat and starts to drain. It handles light and heavy loads very well by having the float modulate as the load changes. 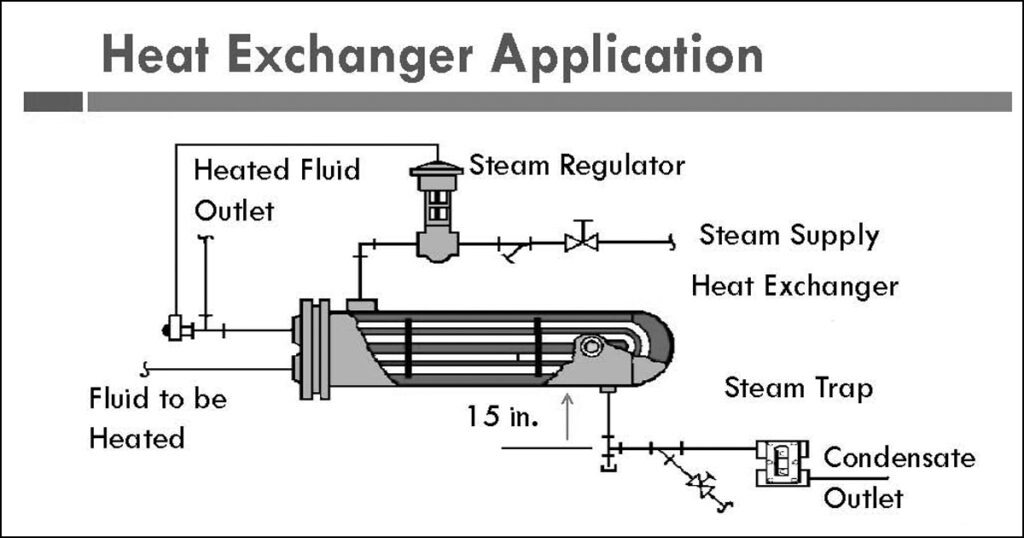 Fast air removal
An F&T trap is great for handling large volumes of air and, because of this, it is very beneficial for the quick distribution of steam. Air is such a good insulator that it can greatly reduce the rate of heat transfer to heating equipment and slow down the distribution of steam throughout a system. Applications such as the end-of-main drips, unit heaters, heat exchangers, make-up air coils and anything else that requires air to be removed quickly are perfect for this trap.
Checking F&T traps
Because the trap discharges condensate at saturation temperature, it can be misleading to use the temperature coming out of the trap to check proper operation. Also, because the condensate will be at saturation temperature, a percentage of the condensate discharging from the trap will flash back into steam. Therefore, the best method for checking good traps is visual inspection of the discharge coming from the trap. However, don’t be fooled by the flash steam that may discharge from the trap. A good trap will discharge water with a small percentage of flash steam while a bad trap will have virtually no water while it passes steam with a noticeable hissing noise and plumes of white clouds. Most modern F&T traps come with four ports, two inlets and two outlets. Instead of plugging the second outlet, create a test station by installing a short nipple, service valve and a cap. Then when you want to check the trap, simply take off the cap, open the service valve and monitor its discharge.
Trap Sizing
The sizing of F&T traps is very important for proper operation and longevity of the trap. Many times these traps are line-sized, that is, the size of the steam pipe becomes the size of the trap. The problem with this method of “trap sizing” is the steam pipe is sized to handle steam while the trap is intended to handle only air and condensate, not steam. Remember, low pressure steam expands approximately 1,700 times the volume that a comparable amount of water requires. That is why the steam mains are so big. The best way to make sure a trap will be applied properly is to calculate the actual condensate load the trap is going to handle, apply the proper safety factor and select the lowest pressure differential that will occur across the trap. This is important because if you select a trap that can handle the condensate load, but at a greater pressure differential than it will actually encounter, the condensate won’t drain from the trap. Instead it will back up into the coil or heat exchanger causing water hammer, reduced output and possible damage to the heating unit.
An example would be selecting an F&T trap for a steam-to-water heat exchanger. If the heat exchanger has a control valve on the steam supply line, when the valve closes there will be no steam pressure on the inlet side of the F&T trap. The only pressure differential that exists will be the vertical distance from the bottom of the heat exchanger to the inlet of the trap. Ideally the trap should be at least 15″ below the heat exchanger, which will give you a 0.5 lb pressure differential. Select a trap that can pass the condensate load (with the proper safety factor) at the 0.5 lb pressure differential and you will be assured of complete condensate drainage every time.
If you have any questions or comments, e-mail me at [email protected] or call me at FIA. 1-800-423-7187 or follow me on Twitter at @Ask_Gcarey. ICM