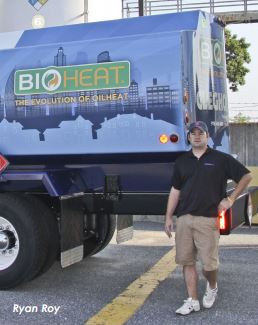 “I’ve never seen a more beautiful truck,” said Ryan Roy, the director of operations for Massachusetts-based Cleghorn Oil. “This is the crown jewel, the showpiece of our fleet. I almost want to put it on a pedestal and keep it as a trophy. People see it and say, ‘Wow, I’ve never seen anything like that.’”
Cleghorn, which changed its oilheat line exclusively to Bioheat this year, won the wrap at the New England Bioheat Symposium in Boston in March. The application of the wrap was paid for thanks to funding from the Nebraska Soybean board and the United Soybean Board through the soybean checkoff, but the artwork is available to all registered Bioheat dealers.
The company planned on parading the wrapped truck to area residents—literally! It was scheduled to appear in the 4th of July parade in Fitchburg and another parade in August.
Roy says the company first learned about Bioheat from a meeting with the team of Paul Nazzaro, NBB’s petroleum industry liaison.
“We jumped on board because it seemed like the right thing to do,” Roy said. “Bioheat is better for the country, better for the burner, and cleaner. It’s working for us.” 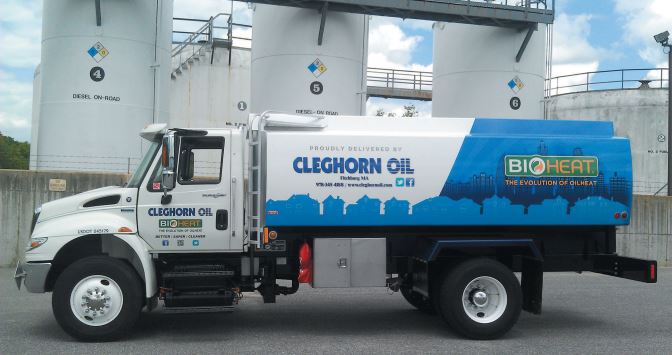 Through the Bioheat program, the company uses post cards, door hangers, and other literature to educate its customers on Bioheat. Roy says the support he’s received from Nazzaro’s team, through NBB, has been tremendous.
Oscar Charron Sr. founded Cleghorn Oil in 1923, using a hand-cranked pump to deliver oilheat in five-gallon buckets, Roy said. He’s a fifth generation family member helping to run the business today. “I think Oscar would like the direction we’re going in,” Roy said. “He’d be happy with how we’ve grown through the Depression and World War II, and how his company has evolved from a small garage to where we are now.”
Bioheat is a big stepping stone for this country and the future of the oilheat industry, he added. For more information on Bioheat, visit BioheatOnline.com.