Spending on new home construction rose to its highest level in nearly five years in July, suggesting that some builders have shrugged off rising interest rates. 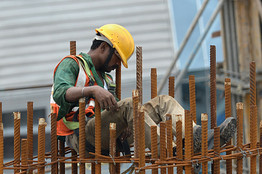 Private residential construction spending rose 0.6% to a seasonally adjusted annual rate of $334.58 billion, the Commerce Departmentsaid Tuesday. Though not adjusted for inflation, that was the highest level since September 2008.
Overall construction spending, which includes commercial and public projects as well as housing, increased 0.6% to $900.82 billion, the highest level since June 2009. The rise was better than the 0.4% forecast of economists surveyed by Dow Jones Newswires.
A rebounding housing market has boosted the economy–making homeowners feel more confident, driving spending on building materials and creating construction jobs. But interest rates have been rising steadily since May, when the Federal Reserve signaled it could start to rein-in a bond-buying program designed to drive down borrowing costs. Central bank officials meet later this month to weigh the next steps for their program.
Higher mortgage rates make homes less affordable. The average 30-year fixed-rate mortgage for loans of $417,000 or less, meanwhile, rose to 4.80% toward the end of August, the Mortgage Bankers Association said last week. That was the highest rate in more than two years.
That may be one reason the number of Americans signing contracts to buy previously owned homes fell in July for the second straight month. TheNational Association of Realtors last week said that its seasonally adjusted index for pending sales of existing homes fell to 109.5 in July, 1.3% lower than the June reading.
July’s construction spending report is more upbeat. While growth during the month was moderate, June’s figures were revised higher. A 0.6% decline in overall spending was adjusted to a flat reading. June residential spending was revised up to a 0.4% increase from the previously reported 0.1% decline.