100 Million Solar Heating & Cooling Systems in the US, That's the Goal

from SustainableBusiness.com News When we hear about the huge growth of solar installations in the US, the talk is mostly about solar PV, but there’s enormous potential in solar thermal – used for heating and cooling.Currently, there’s 9 gigawatts (GW) of solar thermal installed in the US, 1 GW less than solar PV.
In fact, the national discussion on clean energy revolves around electricity and transportation, leaving out the biggest source of energy consumption – heating and cooling homes and buildings.
Almost half (44%) of America’s energy consumption comes from heating (hot water and space heating) and cooling, which costs some $270 billion a year.
Right now, the US is on track to have 75 GW of solar thermal by 2050, installing 30,000 systems a year. But the Solar Energy Industries Association (SEIA) has created a roadmap that would result in 100 MW by 2025 and 300 MW by 2050, when there would be 100 million installations. 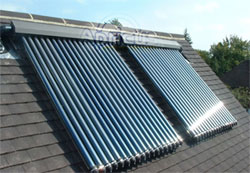 At that level, solar thermal would supply 8% of US heating and cooling demand. It’s already the most efficient renewable energy technology and has the quickest payback – costing as little as 6 cents per kilowatt hour.
100 million systems sounds like a lot to us too, but SEIA and partner BEAM Engineering say it’s feasible. It would replace the need for 64 coal plants, save Americans $61 billion in energy costs and create over 50,000 jobs.
“Part of our challenge is to do a better job of educating policymakers – at both the state and federal level – about the enormous benefits solar heating and cooling provides to American consumers and businesses, as well as to the U.S. economy,” says Rhone Resch, CEO of SEIA.
Besides raising awareness on the part of homeowners and businesses, and incentives through tax credits, thermal solar would significantly advance in these ways:

Many countries have adopted solar thermal much more aggressively than the US, which ranks 36th in the world, relative to its population. The vast majority are in China (152 GW) and Europe (39.3 GW).
Here’s the roadmap: